Ascending the stairs towards their classroom, it’s clear the sixth and seventh graders spot me before I see them. I hear excited shouts of “Profe ya viene!” and “Ingles!” and a group of kids that was loitering outside hurriedly rushes into the room. As I enter, the thirty-plus kids rise and begin to say, “Buenos Dias”. Halfway through this, they remember one of my first lessons, and they enthusiastically shift to a chorus of “Good Morning!”

I greet my co-teacher and supervisor, Alexandra, spend a minute discussing the lessons plans for the day, and then walk to the front of the class, white-board marker in hand. The classroom isn’t silent, as few middle school classes ever are – but I’m met with dozens of pairs of curious and attentive eyes. Here, I’m not an indecisive eighteen-year-old, unsure of my path in life. Here, I’m Adan Pescador-Cafe, Profe de Ingles.

Not every class I teach at Escuela Jose Victor Ordonez begins, or continues, like this. I have experienced frustration just as often as success. It’s an incredibly humbling experience to stand in front of students primarily speaking a language I am far from mastering, armed only with my native born English ability and thirteen years of American schooling as experience. However, it is also incredibly rewarding.

How I’ve been treated by the students at Victor Ordonez is an almost-perfect paradigm of how I’ve been treated the past three weeks in my community of Bella Union – with welcoming arms, enthusiasm, respect, and a willingness to learn. Every day is an adventure, accompanied with fruitful teachings. I’ve learned how to fall asleep to the sounds of stray dogs marking their territory through their barking, and how to wake up with the groans of dairy cows outside my bedroom window. I’ve learned how to (poorly) juggle a soccer ball, plant a corn field, and describe the weather here in the indigenous language Kichwa (achachay = super cold). I’ve attended services at two different churches and celebrated Rosh Hashana with a small Jewish community I’ve found in the city of Cuenca.

It’s only been six weeks! My family asks often if I am accustomed to life here, and I am very clearly not. I’m still learning how to find a routine in spontaneity, how to embrace life undefined by plans or a concept of being on-time, and how to balance spending time within and outside my comfort zone. In this environment, to avoid becoming overwhelmed, it’s just as important to maintain a narrow perspective as a broad one, experiencing one moment at a time. But, for every pang of homesickness, I’ve been awestruck by the beauty of this place and the people that live here. I can’t wait for the next five months.

Since I can only attempt to write eloquently for so long, here’s some photos and descriptions to let you in on what daily life in Bella Union is like.

Around six hours per day, four days each week I teach English at Escuela Jose Victor Ordonez, perched on one of the many hills overlooking Bella Union. While it is technically an elementary school, I work with about 150 kids from ages 4-17 who hail from Bella Union and other small agricultural communities. The first photo below is a panorama taken from the office. At the beginning of each day the students line up by grade level to listen to announcements and do a four part marching routine that’s hard to explain (and for what reason I’m still not sure.) On sunny days the school has almost 360-degree views of the valleys which are stunning.

While most of the curriculum is government-determined and taught through textbooks, I have found and created interactive activities (called “Dinamicas”) to make class more engaging. Successfully implementing these requires me to plan ahead for each week, an example of which you can see in the second photo. As many days are chaotic and I cover less (or more) than I bargained for, these plans continuously change. The next two photos are (respectively) the second and third grade class learning the alphabet and my lesson on describing the names and relationships of family members in the sixth and seventh grade class. 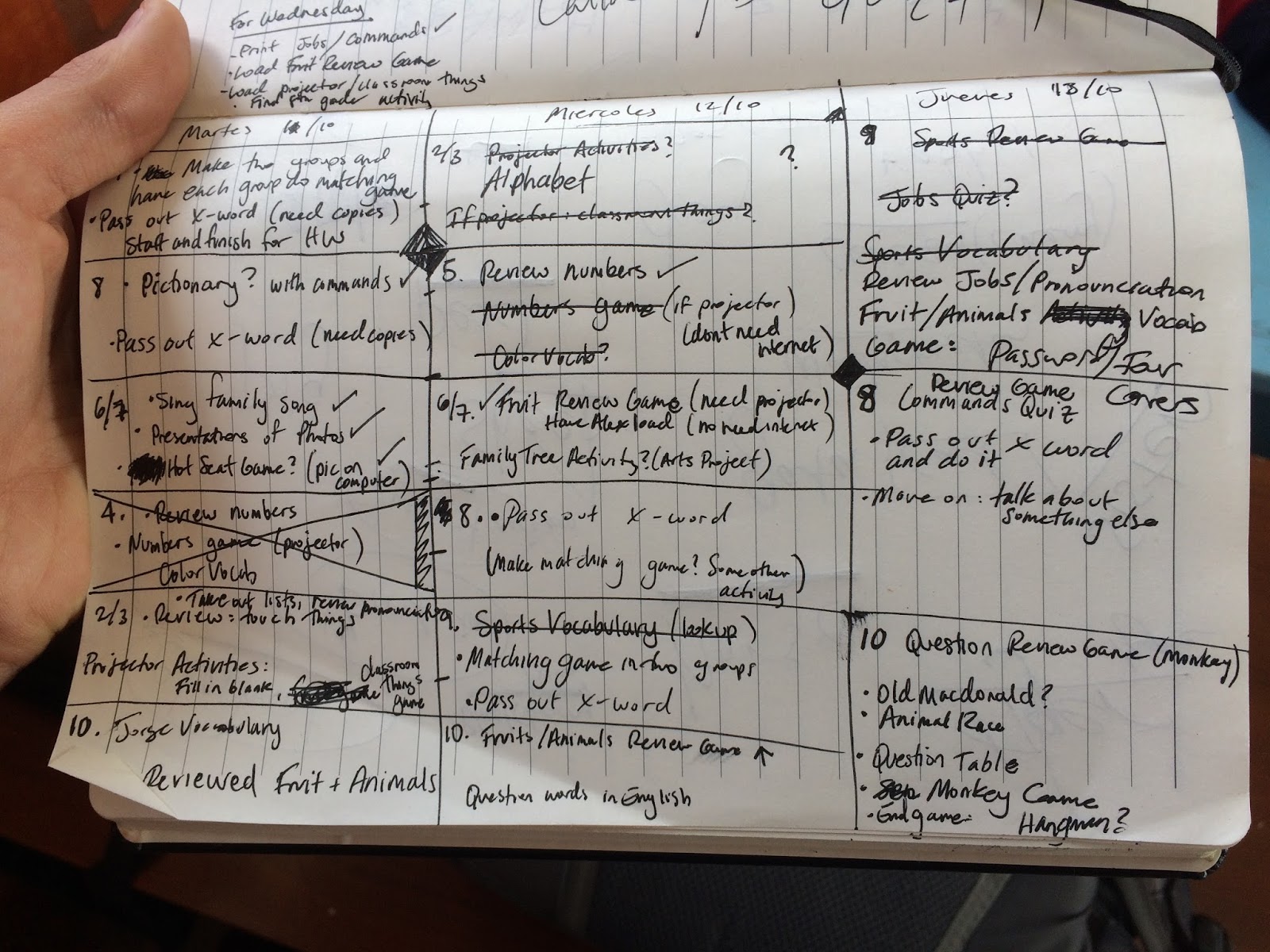 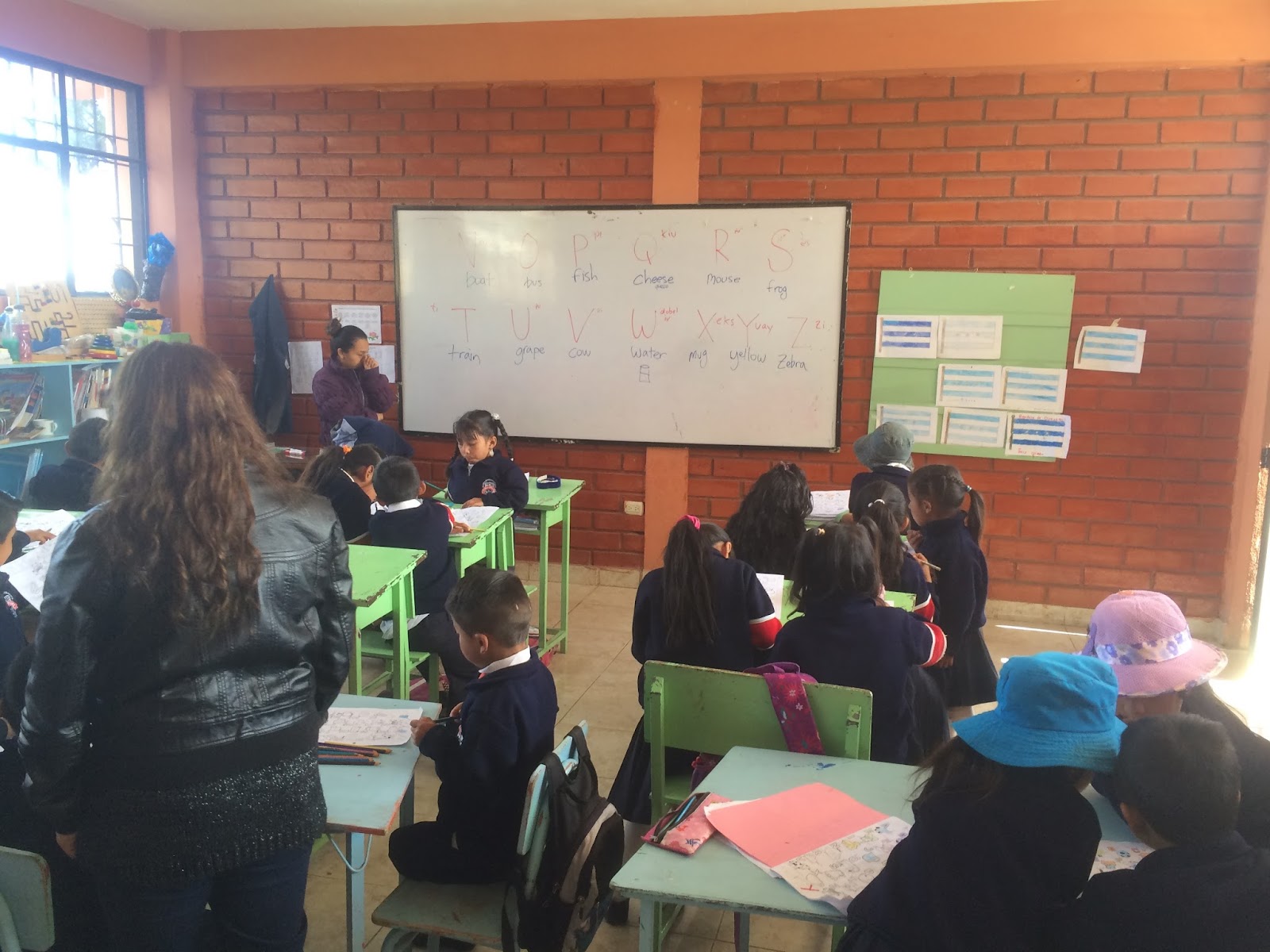 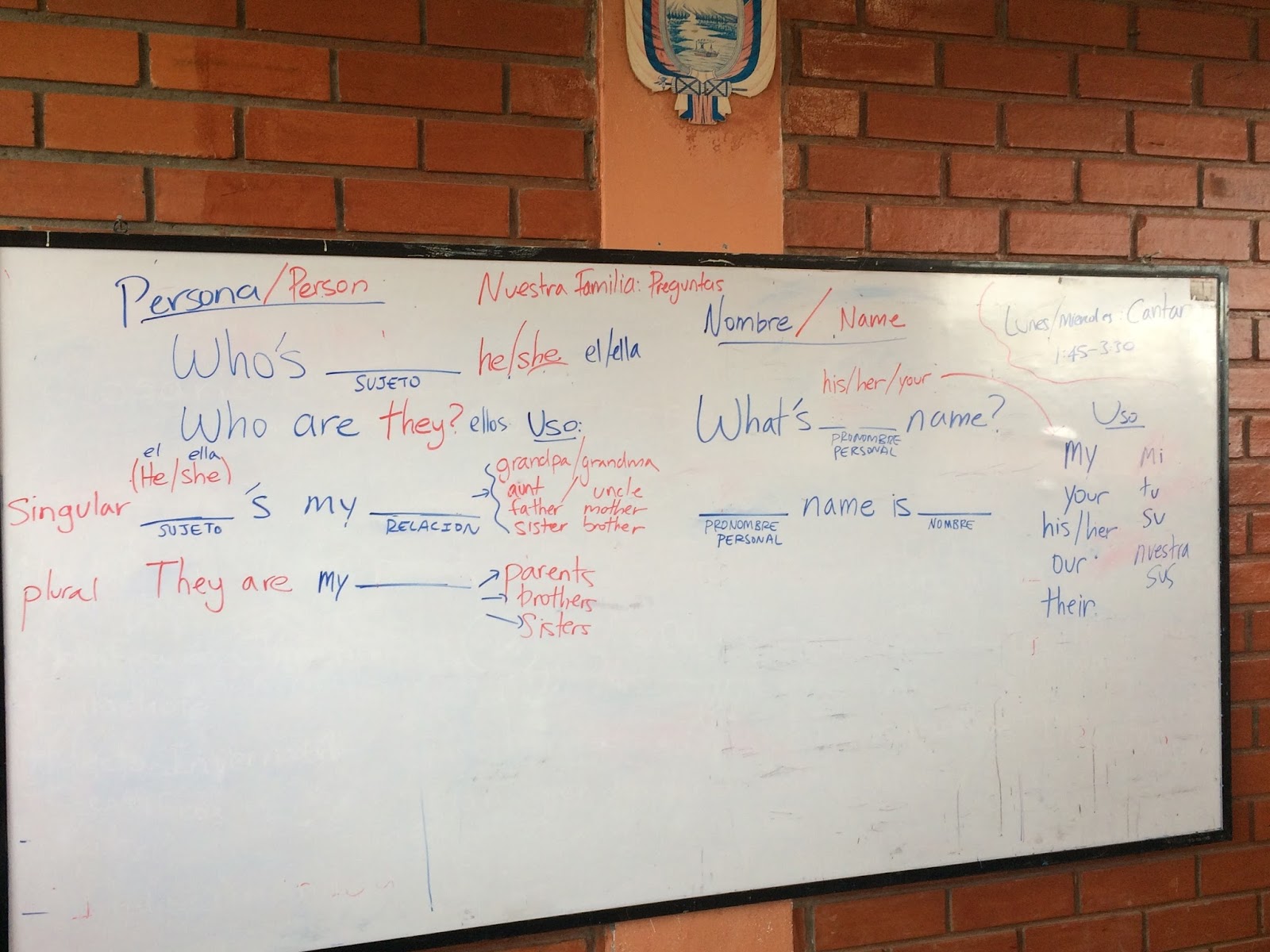 My time not at school is primarily spent with my incredible host family! My parents, Polo and Elsa, own and operate a small corner store (“Tienda”) and the only restaurant in town, known for its delicious chicken. Polo is also a taxi driver and entrepreneur. Some of the highlights of each week are playing soccer with my host brother Andy, watching Cartoon Network with my sassy little sister Erica, and helping my parents serve lunch to groups of senior citizens every Saturday. The first photo below is from one of the lunches – as you can see, the hat game is strong here in Bella Union. Next is a picture I took of all the men (#squad) with my host father Polo crouched down, wearing a poncho he found. I’ve also gotten the chance to participate in other family activities like shopping in Cuenca (the next photo, featuring Polo and Erica), going to Deportiva Cuenca futbol games, and planting a corn field as mentioned above (not shown: sore and tired gringo not participating in said planting but taking photos.) 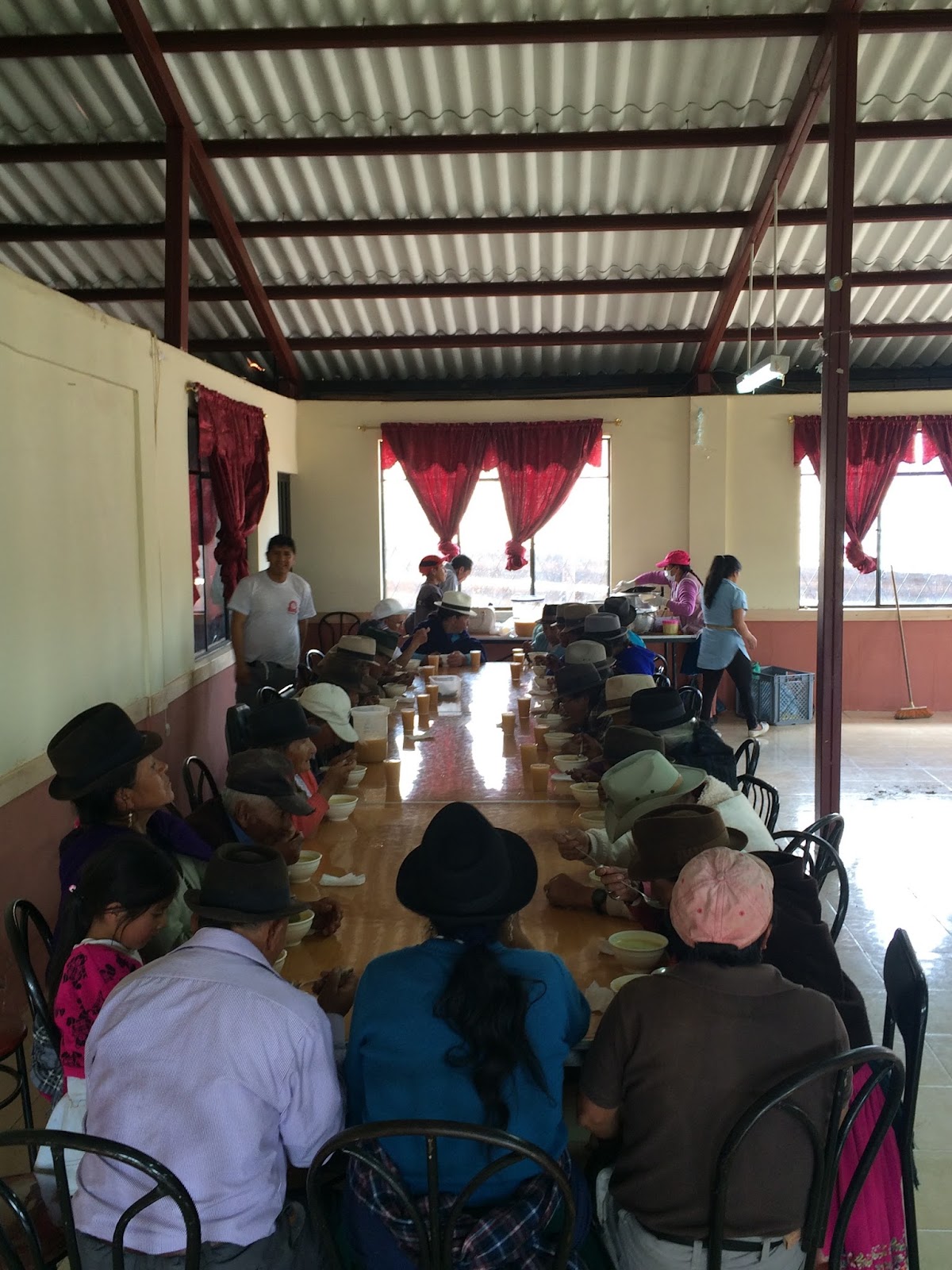 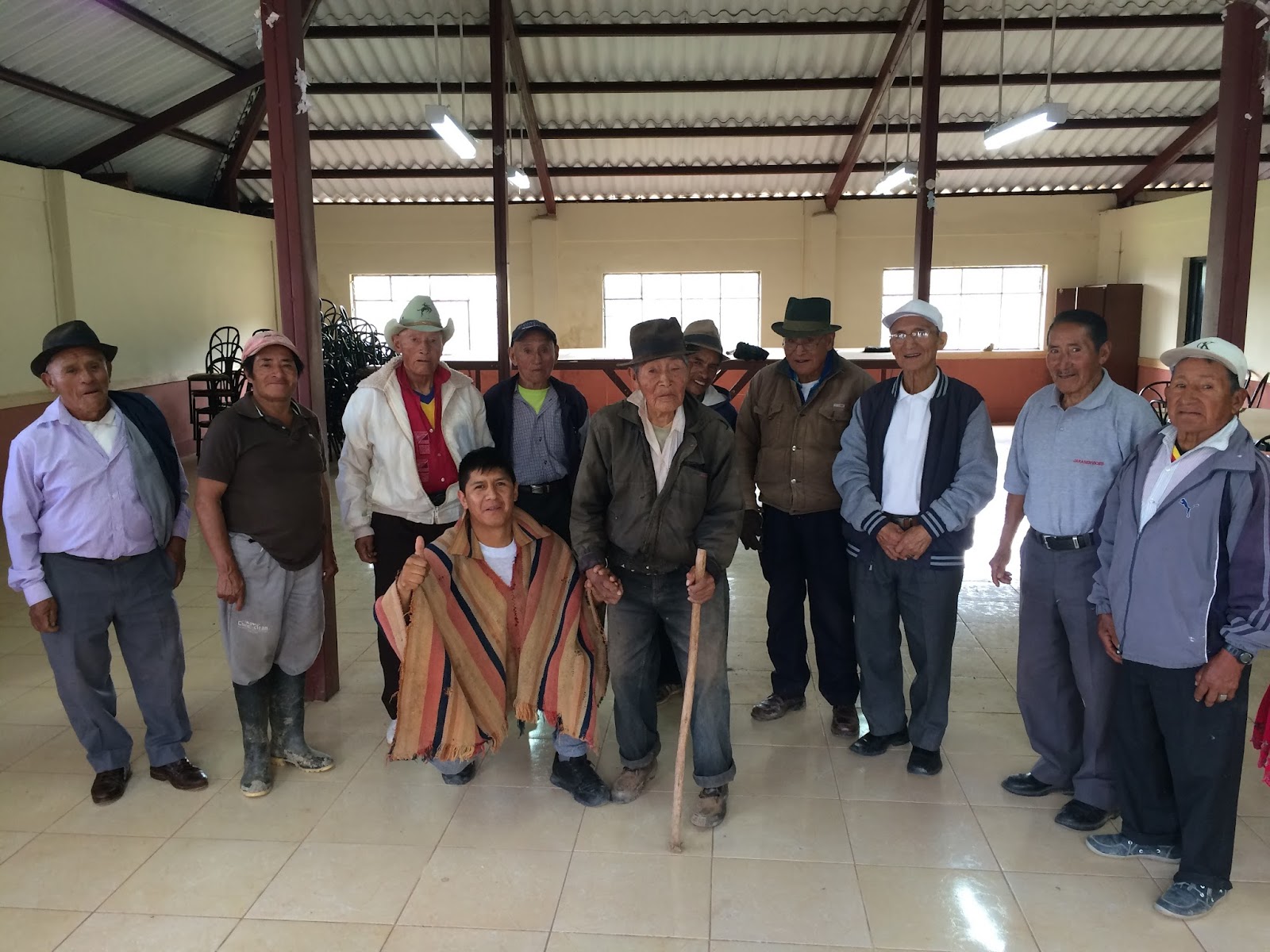 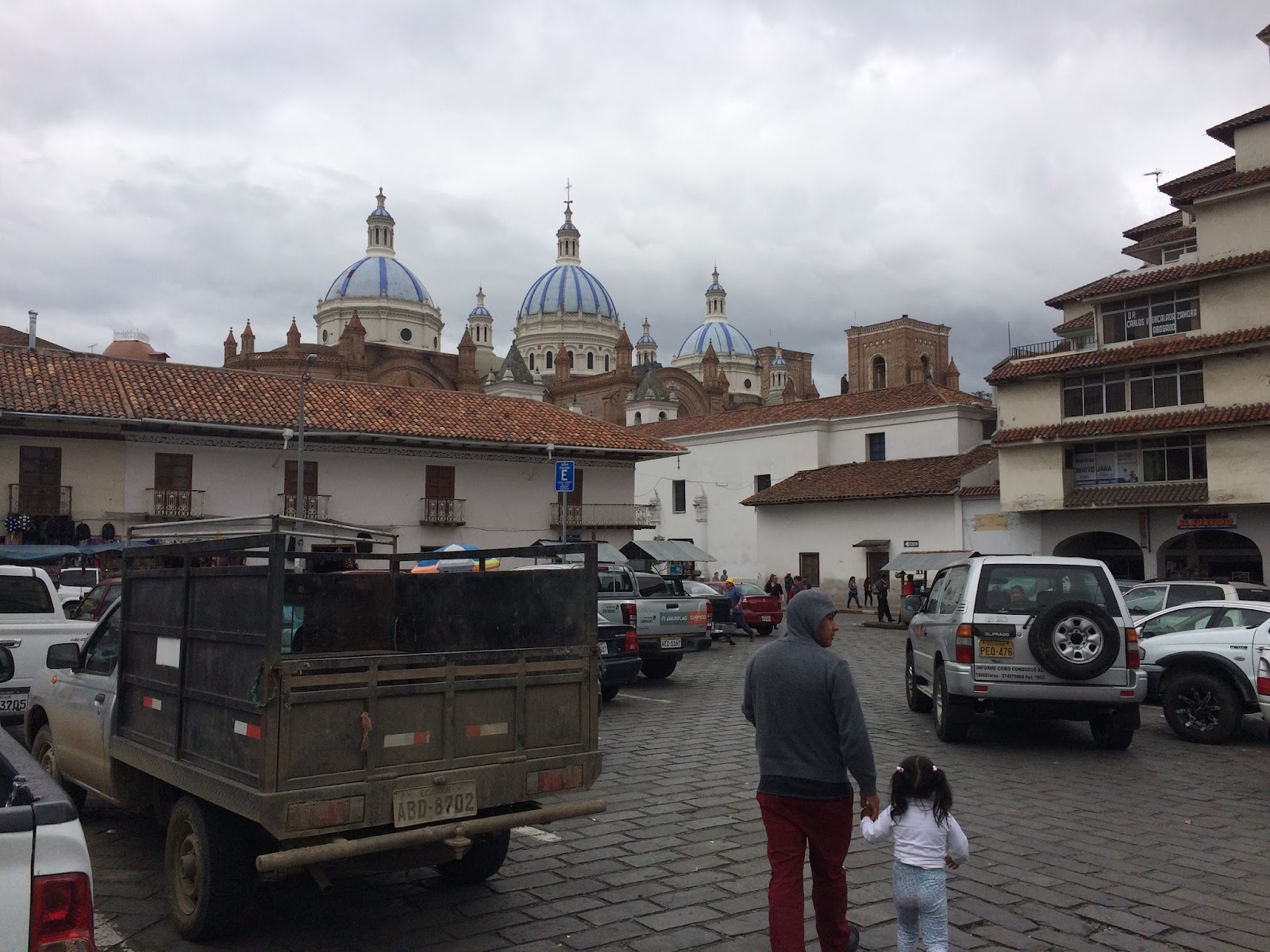 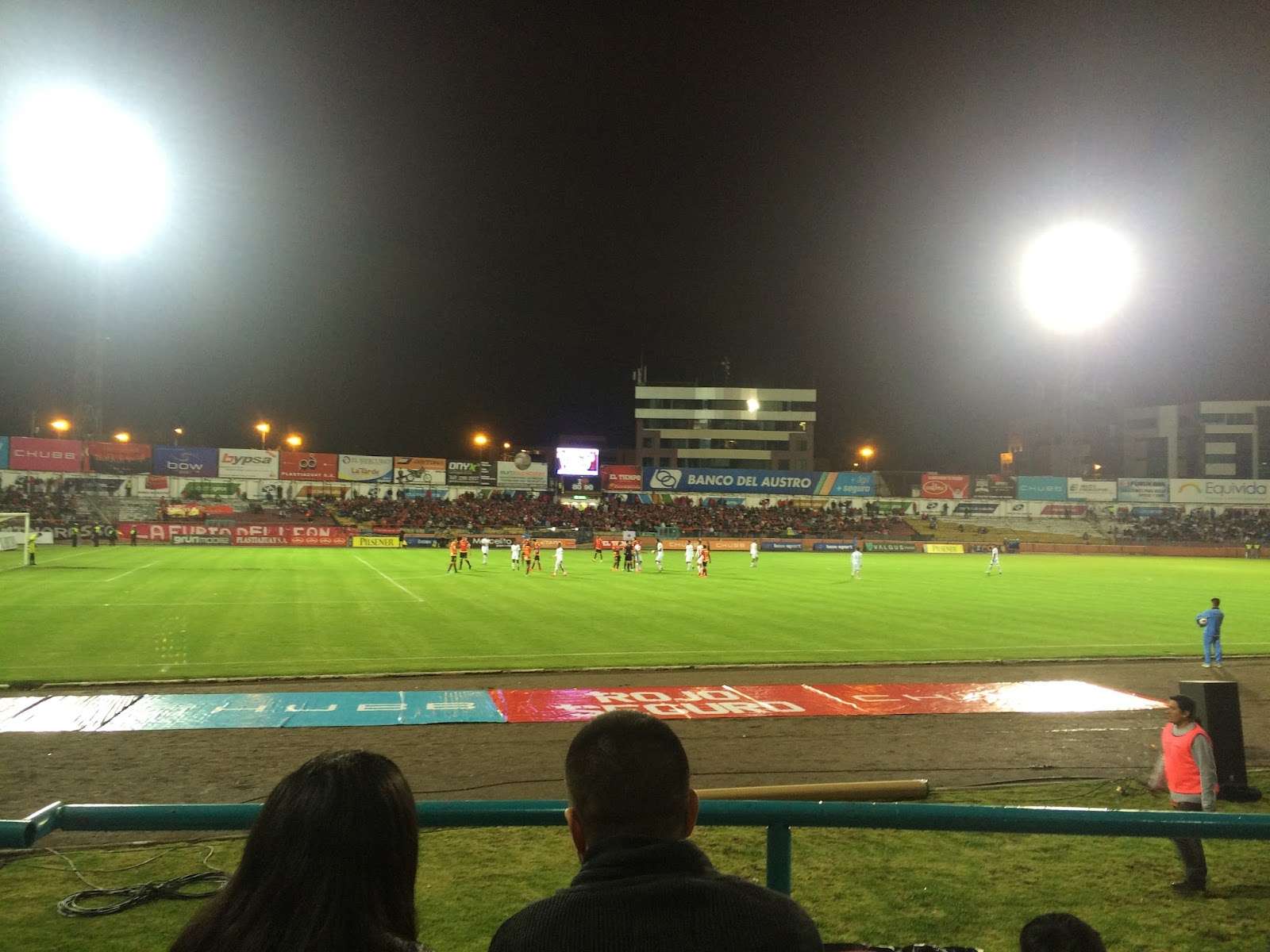 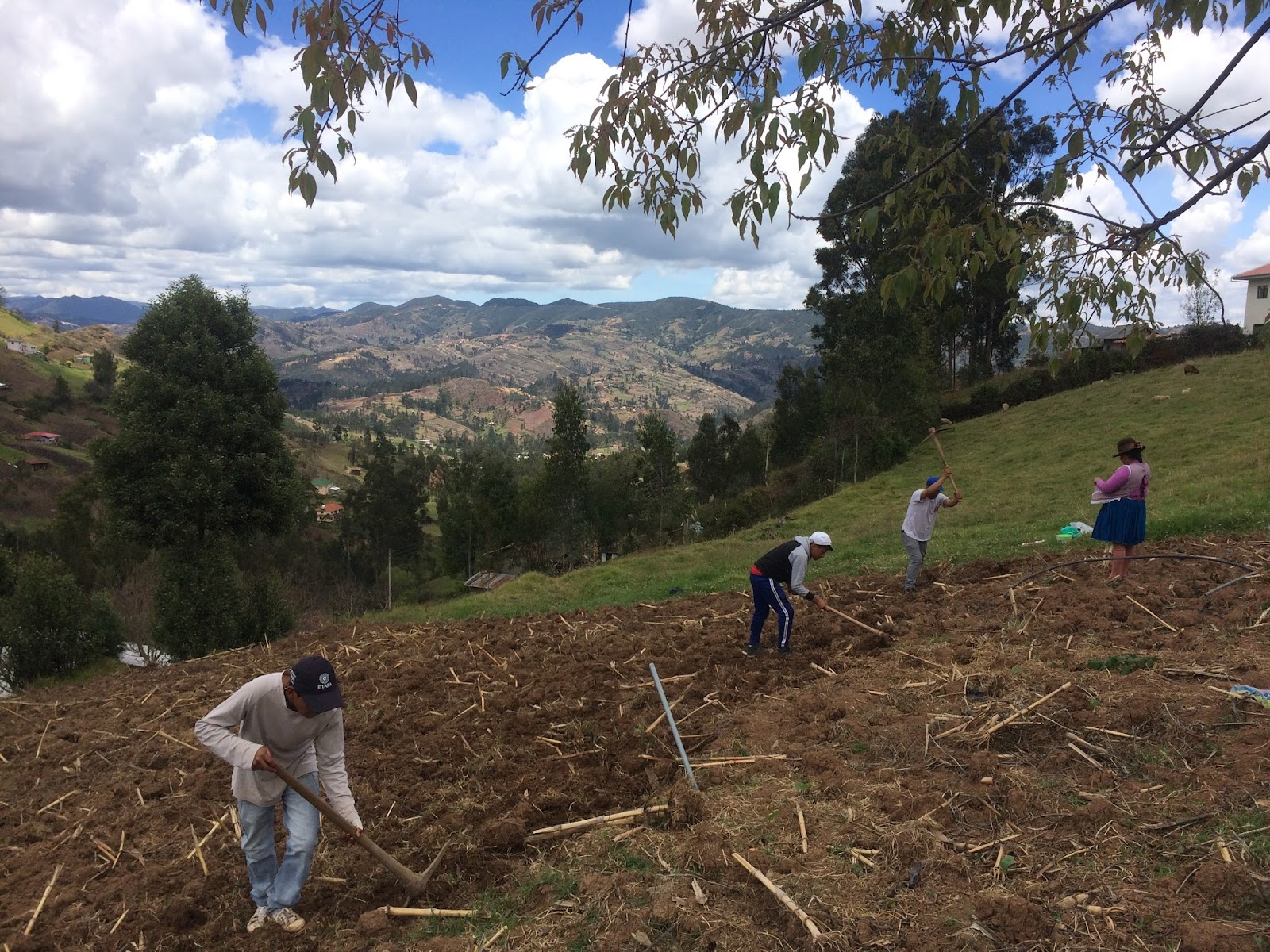 Finally, here is a slew of other photos I’ve taken in Bella Union. First, a typical plate of food I’m served everyday in the restaurant for lunch upon returning from school. While the food here lacks variation, I have yet to tire of it and I am thankful to live with a family that makes such delicious food. 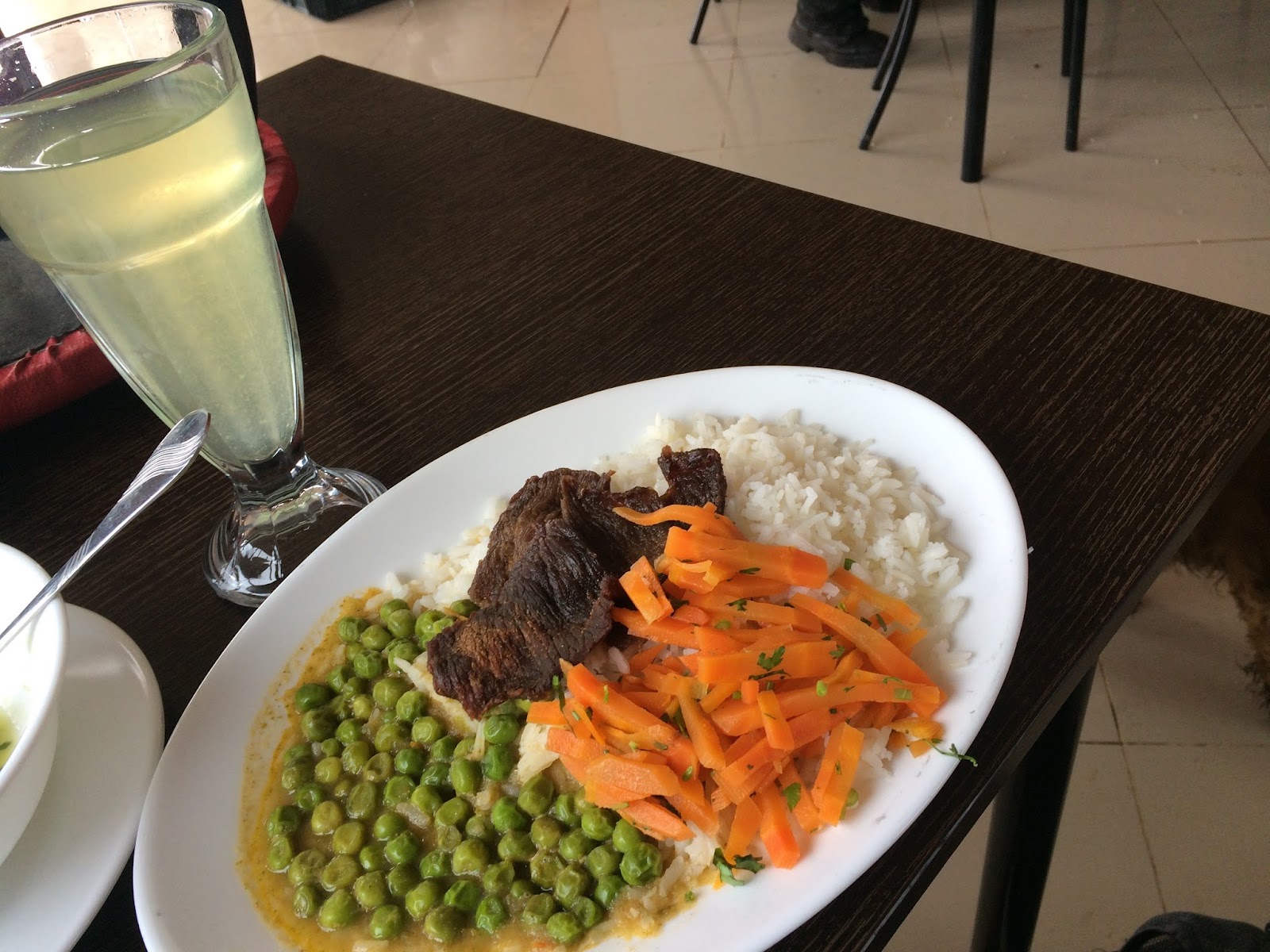 Next, a colorful array of wet clothes dry in the afternoon sun. 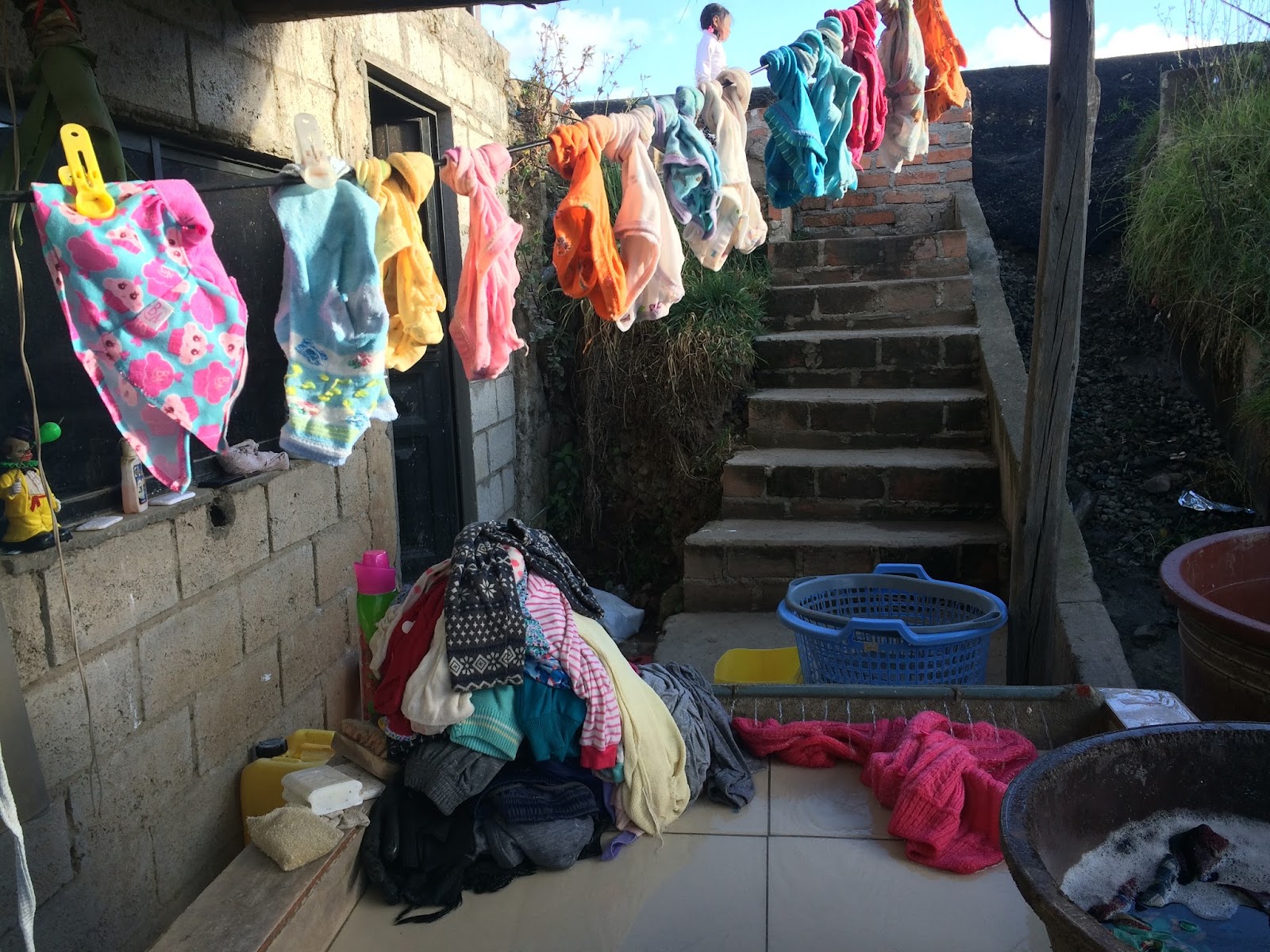 Here’s a panoramic view of the valley, taken on the other side of the road opposite my house.

Here’s the family dog Qendi (not sure how it’s spelled) watching over the property for other dogs. 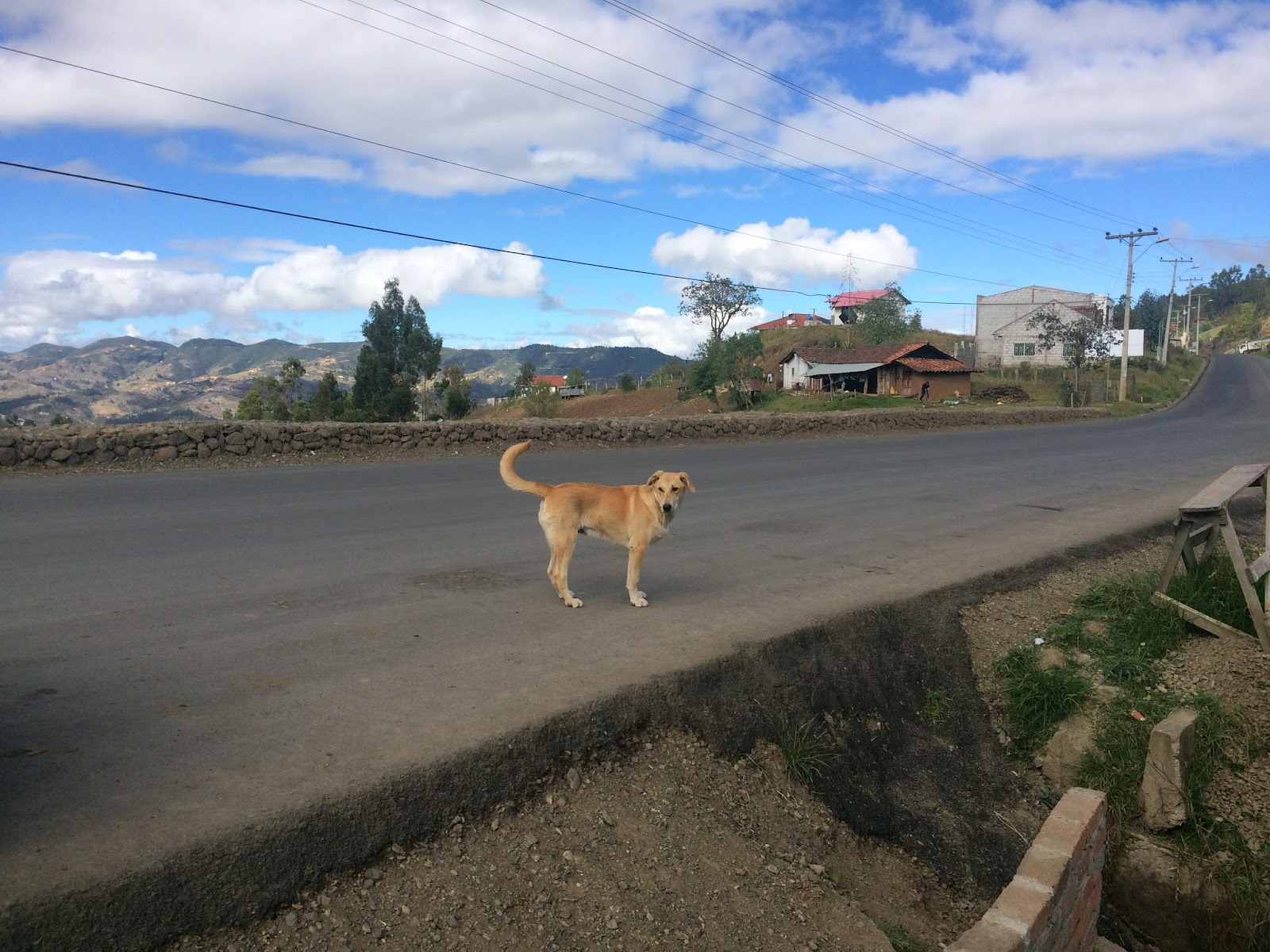 And this is a different dog staring longingly at my corn pancake as I take watch a neighborhood futbol game Sunday afternoon. 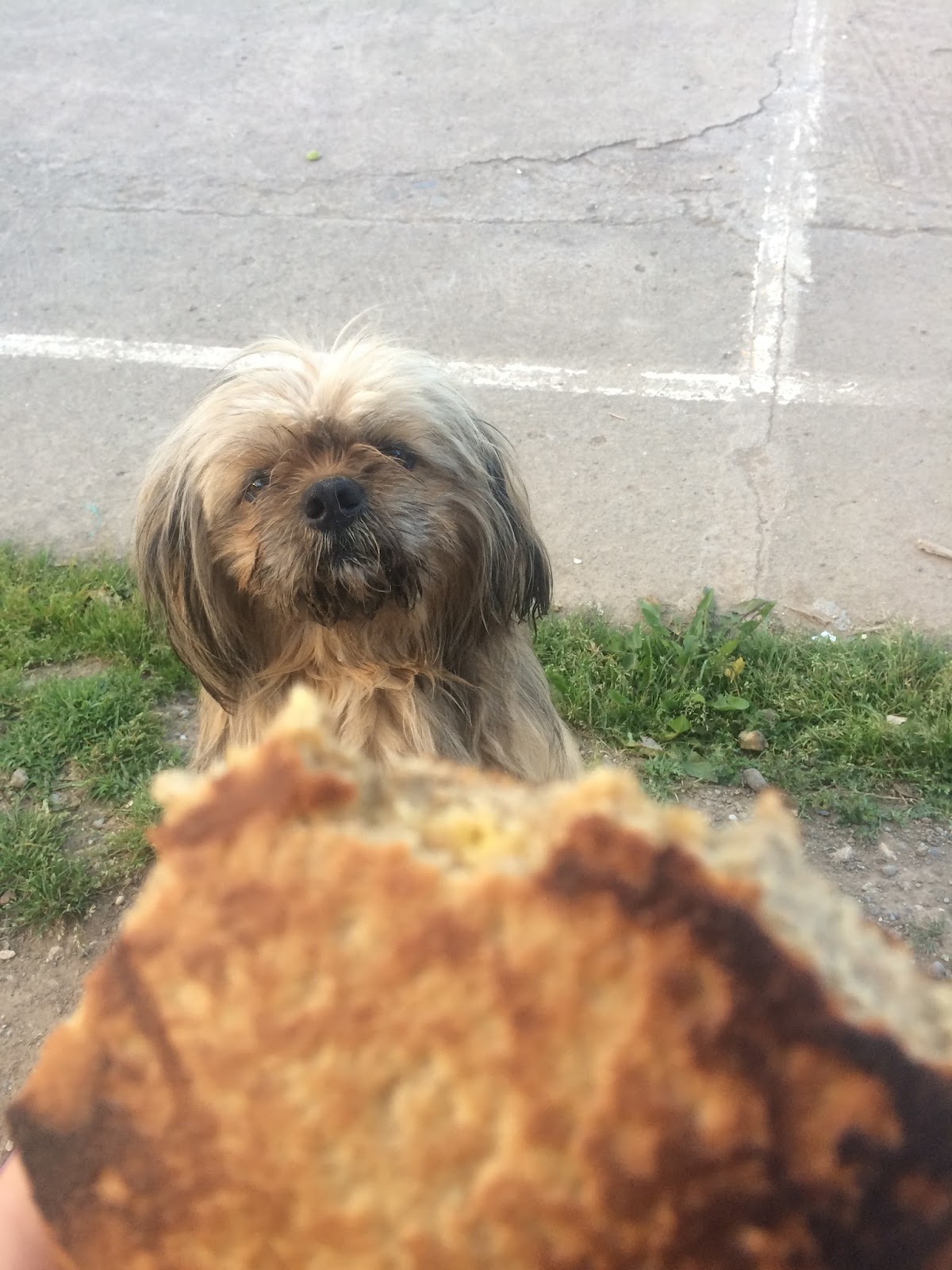 Aden's main passion (besides UNC basketball) is all things music - listening, playing, creating, and sharing. He leads his school's all-male a cappella group, plays Ultimate Frisbee, and serves as a tutor, mentor, and counselor in the Jewish community. His goals for this year are to acquire new language skills, gain new perspectives, and develop greater self-confidence and independence. His favorite quote is "Comparison is the thief of joy", attributed to Theodore Roosevelt.