At Home Rituals and Practices

While in India, I lived with a spiritual counselor for the Hare Krishna community. My host mom maintained a high senior status within the Pune ISKCON temple, as she was one of the first devotees in the city and helped erect the first Hare Krishna temple in Pune. She is well known throughout Pune and Mumbai. Through her, I gained access to experiences like meeting her spiritual guru, attending exclusive dinners and celebrations, on top of insurmountable gestures of preferential treatment. From what I’ve gathered, my host mom lead a very different lifestyle from other host families and it was fascinating to observe the different ways that people lived through seeing their homes and spending time with them. One of the aspects of my homestay which was very directly affected by my family’s spirituality was their dietary restrictions and food rituals. They believed that food should be made in good consciousness, which meant that the person preparing the dish should be thinking happy, pure thoughts. The food is not to be smelled or tasted before it is offered to the lord. Every food I ate in the house was sanctified. I rarely fed myself because eating with others, being served, and general hospitality was the culture, but when I did, I would have to ask my host mom or sister if it had already been offered.

ISKCON devotees lead a Jain diet: no meat, no fish, no egg, no onion, and no garlic. It wasn’t an obstacle for me at all because I didn’t eat meat before I came to India, but in my constant efforts to get my host sister to come to visit me in the U.S., I can’t help but imagine how difficult would be for her to keep Jain.

On top of a Jain diet, my host mom ate in accordance with Ayurveda – – she ate ‘with the motion of the sun’ so only after sunrise, around 10 am, and before sunset, about 4 pm. The food was always organic and freshly prepared each day. We kept nothing packaged in our home.

Clothing, Jewelry, and Other Adornments

The first thing you see when you walk into my host family home is a large hall, long wispy curtains, complemented with whites and beiges. Two altars adorn the length of the hall, one entirely made of marble, housed three vignettes of the reincarnations of Krishna, in another altar, the goddess of the land from which Krishna comes. All of the figures are carved out of marble and changed every day. At night, each figurine is put to sleep and in the morning risen again. My host mom did morning puja (deity worship) from 8 to 10 every single morning, in which she would pray to the gods and change each of their outfits. Usually, their outfits coordinate each day. 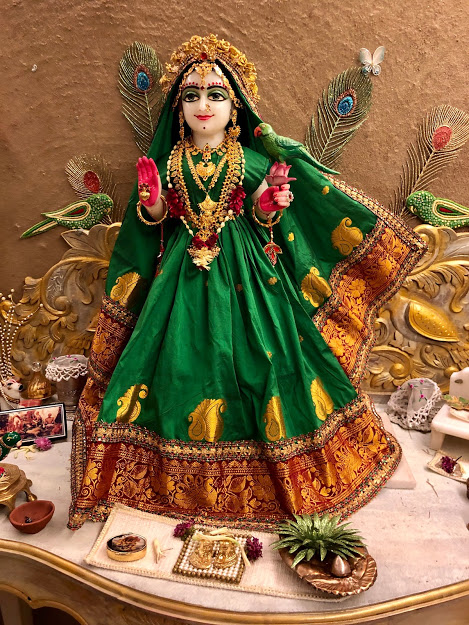 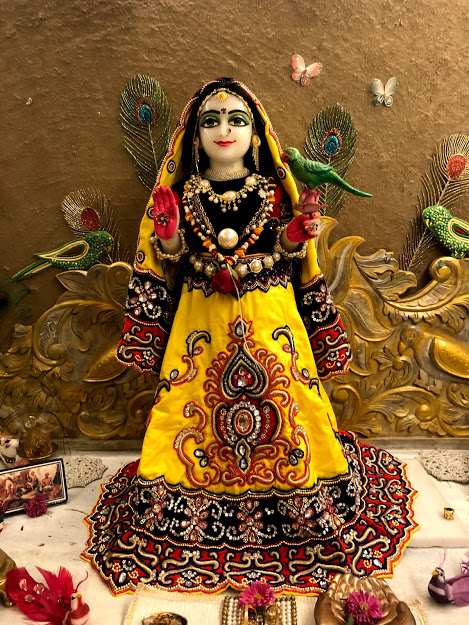 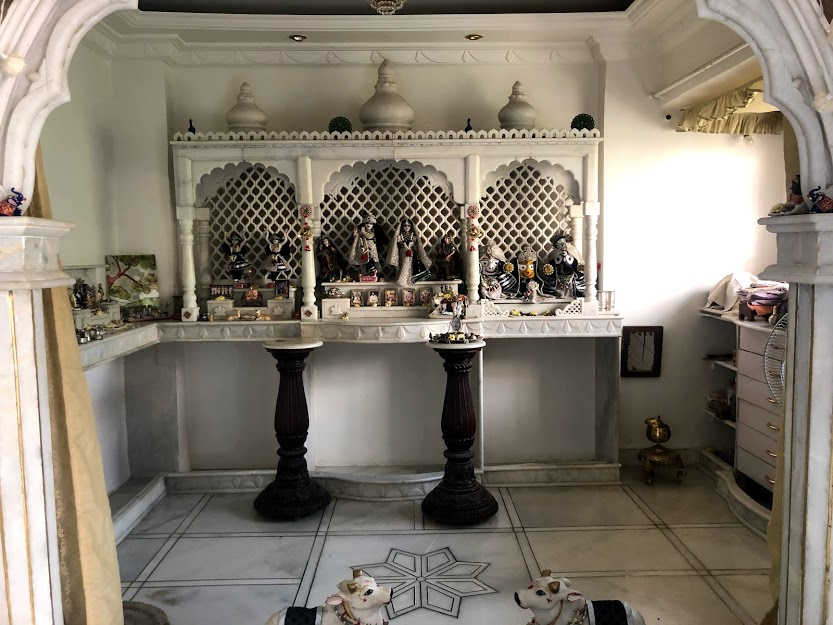 Fresh flower garlands were also made at the temple by devotee women as a part of daily Seva (service for god). However, they are not meant to be touched with unclean hands nor even smelled. First, they are offered to Krishna, and then they are draped around his neck. The flowers are so fresh you can smell them throughout the temple and our hallway at home.

The first celebration came about one week after I’d arrived to live with my host family. The entire first week, we were doing preparations for the reception of a new deity that was installed in our house. It was a good opportunity to bond with my family and a good crash course for Krishna consciousness because I was so immersed in it from the get-go. Another festival that was going on in the first month of my arrival was Janmashtami, which is Krishna’s birthday but isn’t limited to just ISKCON devotees celebrating it, it's typically a big festival in India because Krishna is also a prominent god in Hinduism. Toward summertime, we celebrated Pushp Abhishek, which was a ceremony in which Krishna is showered with flowers. We spent hours decorating the home with flowers and garlands prior to hosting about 200 people in our home for the ceremony. After the household Krishna statue is showered with about 40 kgs of flowers, devotees shower each other with the remaining flower petals that adorn the grand hall. 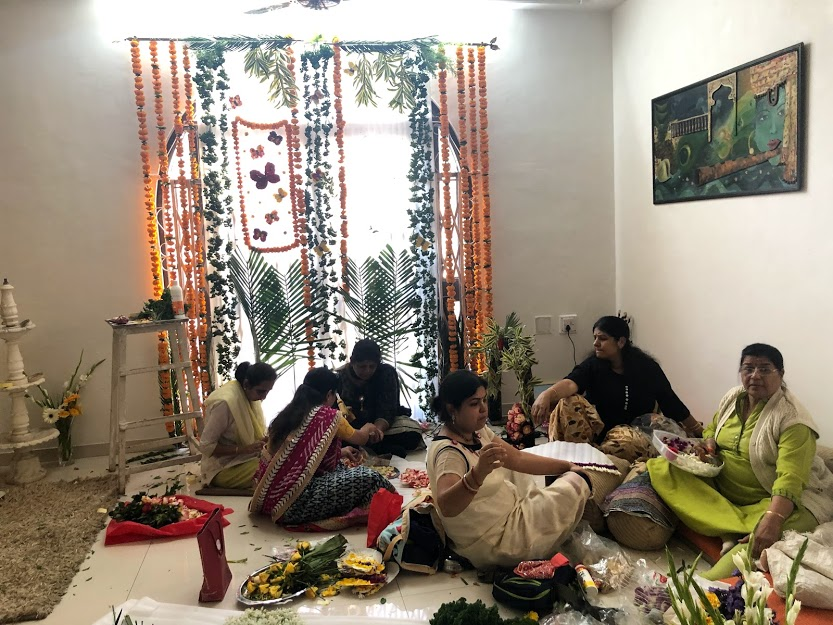 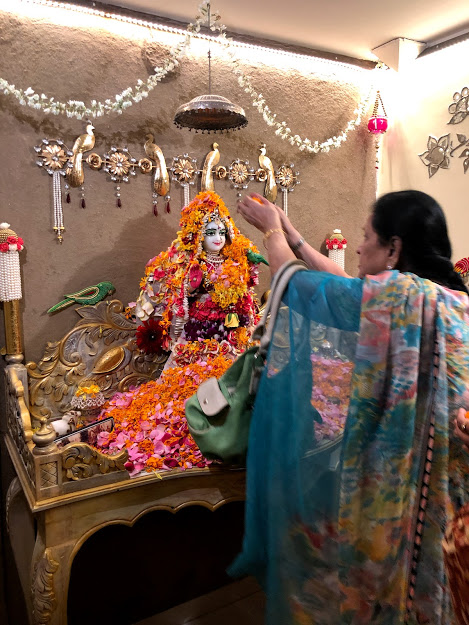 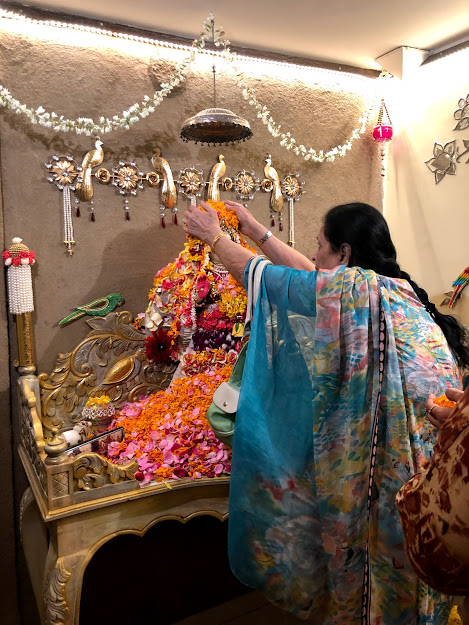 Every year, in many big cities with a large ISKCON following, a Ratha yatra (chariot festival) takes place. Essentially a statue or figure of a reincarnation of Krishna is placed on a chariot and pulled by devotees throughout the city. The Jagannath Ratha Yatra took place in the very center of Pune. It was the only time that the center of the city wasn’t swarmed with traffic, it was blocked off for the parade and people who lived in the center of town watched from their balconies as ISKCON devotees worshipped and displayed their god in the streets for everyone to see. 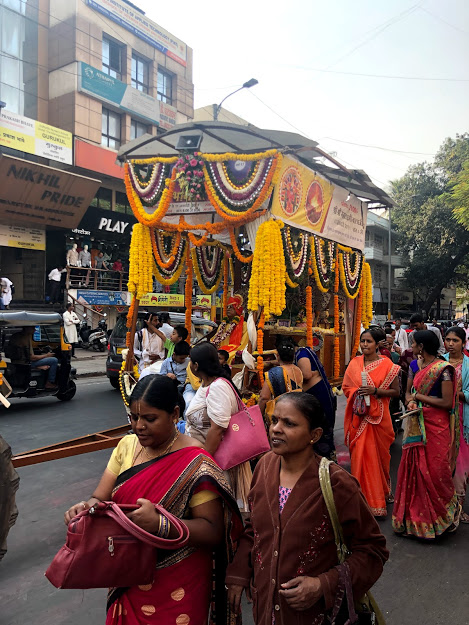 Alyssa is passionate about economic and social equality. She is involved in mock trial and her school's volunteering club. She enjoys trying new foods and talking to interesting people! Her goals for the year are to gain familiarity with Eastern thought and philosophy and build meaningful relationships with members of her local community.