The month of February is 28 days, making it the shortest month of the year. It would be fitting thar during this month I see the most of Ecuador in the least amount of time. I started the month off in Vilcabamba in the Loja province for Training Seminar 2. Vilcabamba is known for having “the fountain of Youth” because it is not uncommon for people to live past the age of 100 years old there (at least according to my host family). Vilcabamba was beautiful but like in Cuenca, the omnipresence of white people grew tiresome. 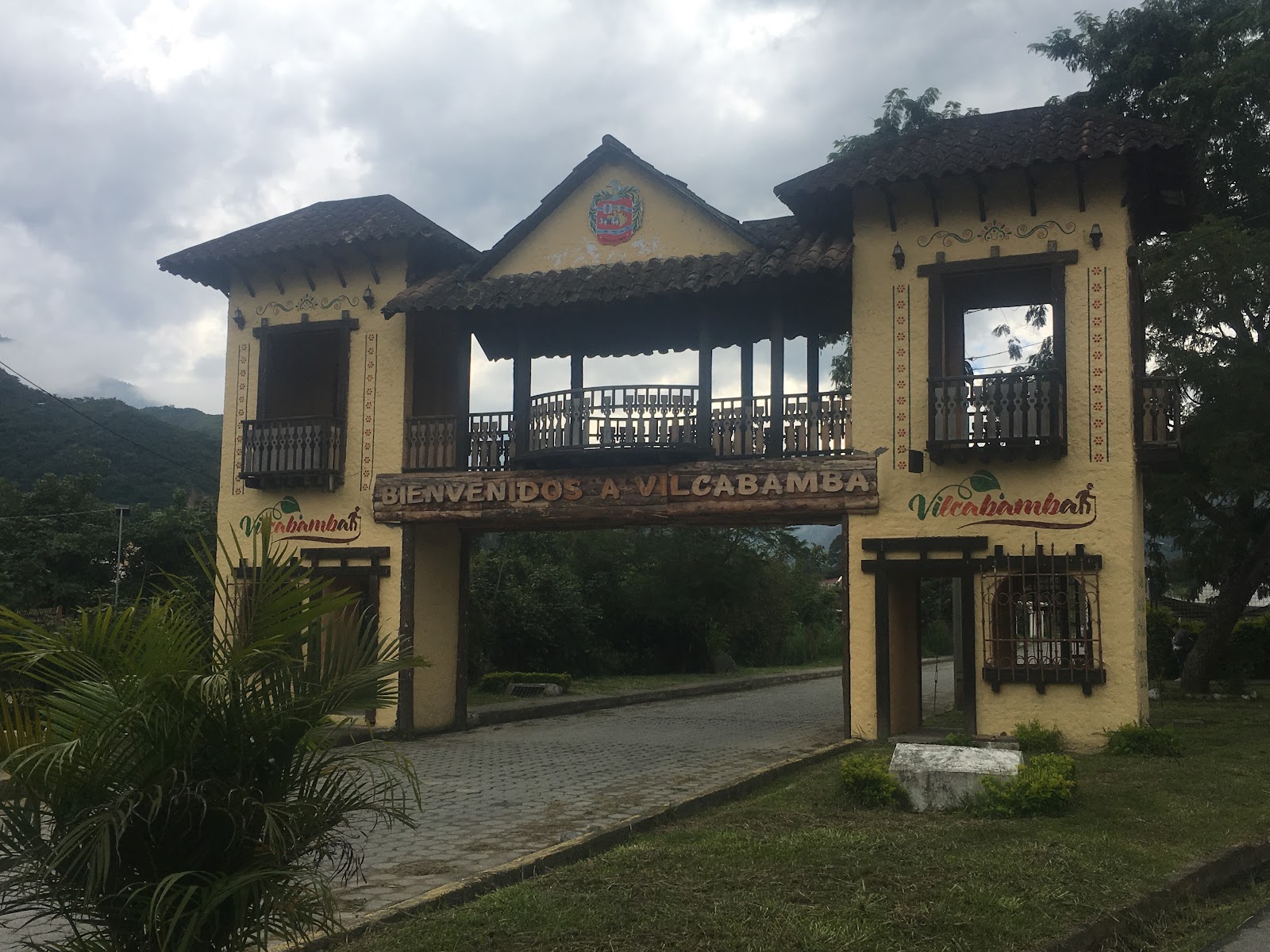 After Loja, I returned home to my host family for about 36 hours and then took a bus to Baños de Agua Santa. Baños is known in Ecuador for its extreme sports and waterfalls. I went with two other fellows and was only there for 3 days but in those days we hit every major sightseeing point in Baños and even took a day trip to Puyo, a section of the jungle. We made it back on the Wednesday before Carnaval started. 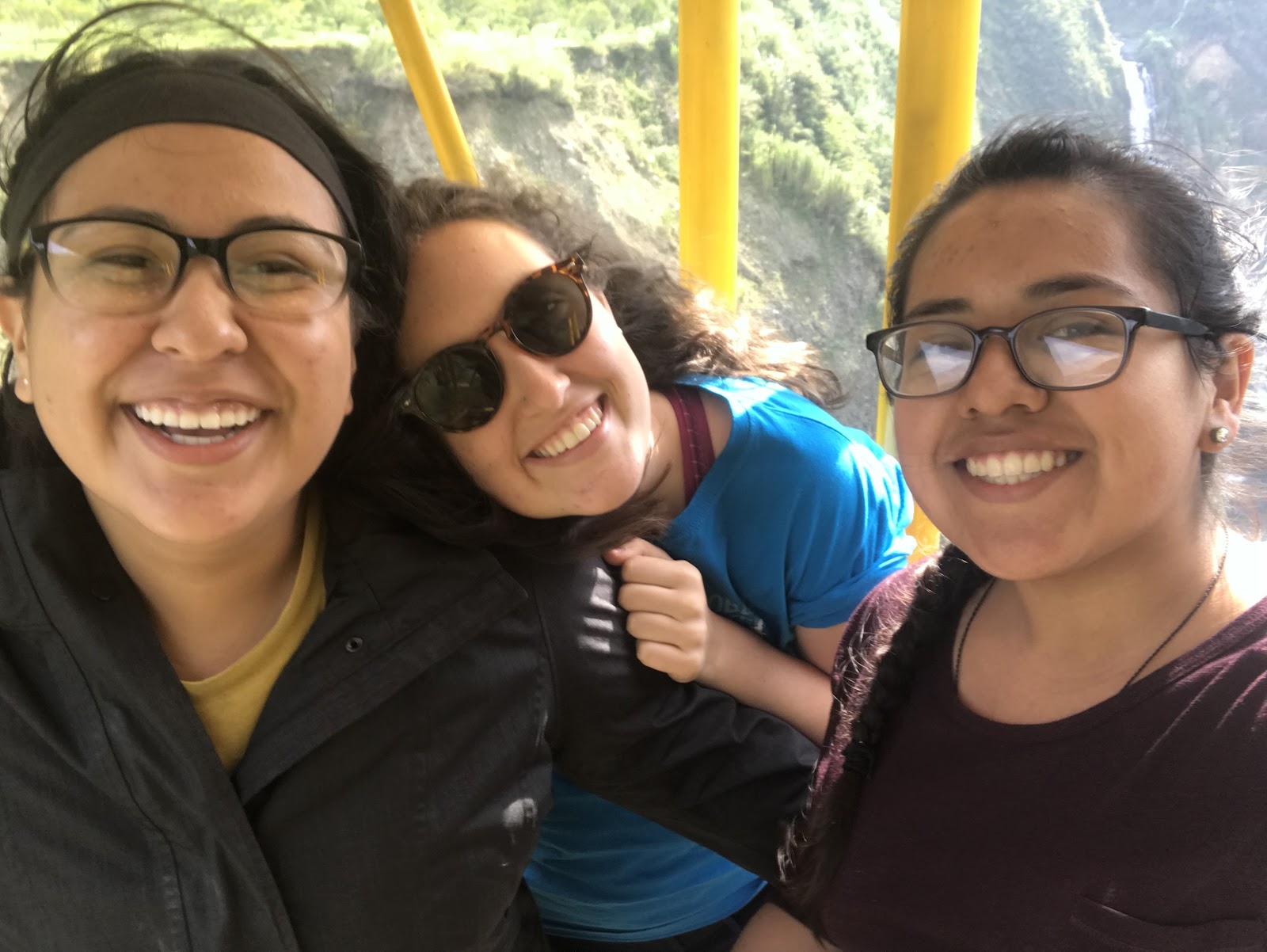 Carnaval, like in many other places in the world, is a time of partying and celebrating before Lent starts. In Ecuador, some carnaval traditions include: being covered in soapy foam (carioca or espuma is what it is called here), cornstarch, and ice cold water. I hung out with other fellows Thursday through Saturday of Carnaval and then spent Sunday through Tuesday with my family. The days with my family, in particular, made me grateful to be here. Even when ice cold water turned into pig’s blood, my host mom yelling about “having her daughter being disrespected” brought a smile to my face. 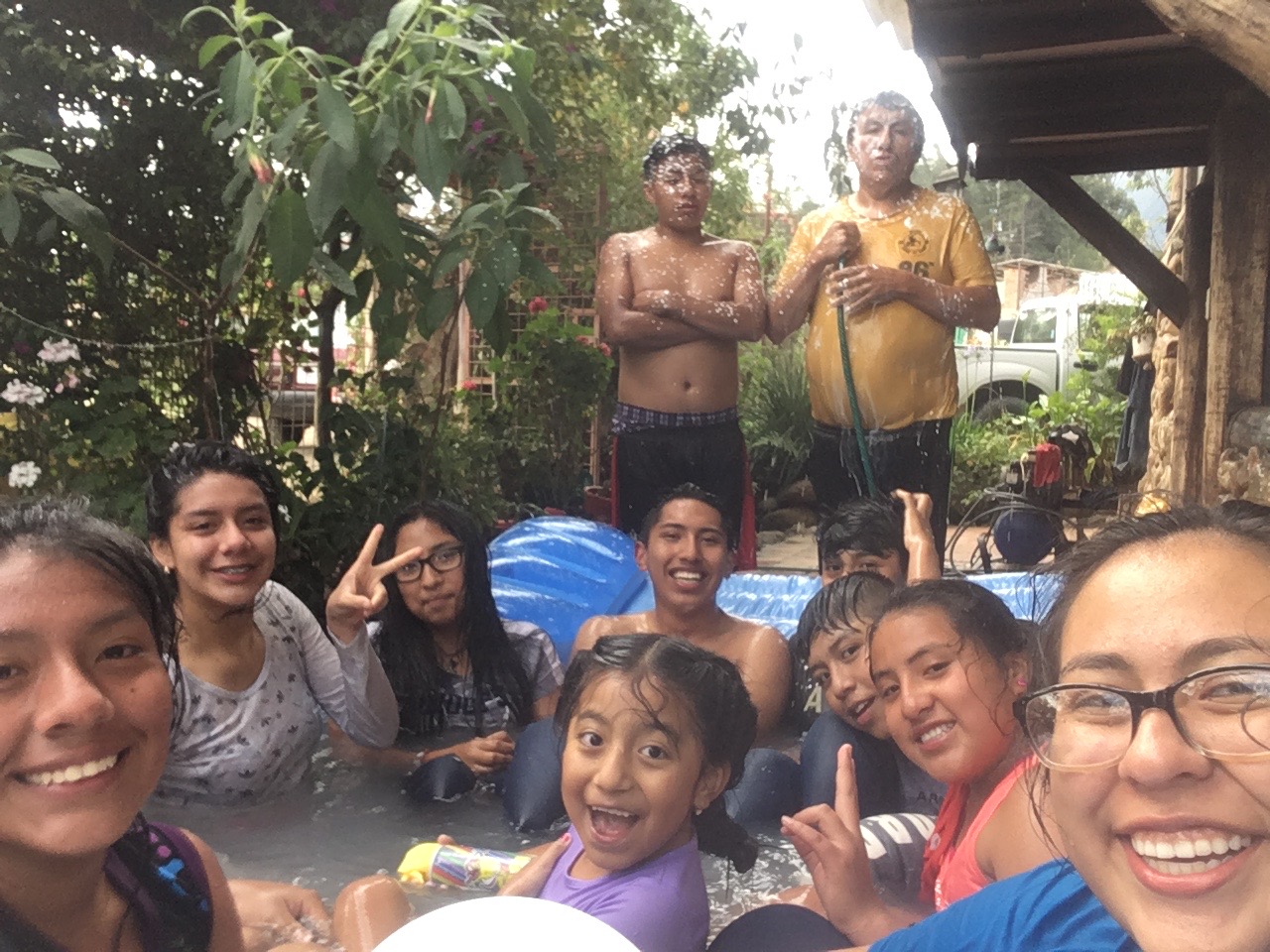 Once Carnaval ended, Lent began and I went to the Cathedral to get my ashes on Ash Wednesday. I haven’t talked about religion a lot but being in an extremely conservative Catholic country after being raised in a quite liberal church was a huge culture shock for me. It made me realize that while the concept of God is universal, people’s perspectives and interpretations are not. I also developed bronchitis somewhere around this point in time but I’m only adding that in for me, so that when I look back at this blog I can accurately remember my time here. 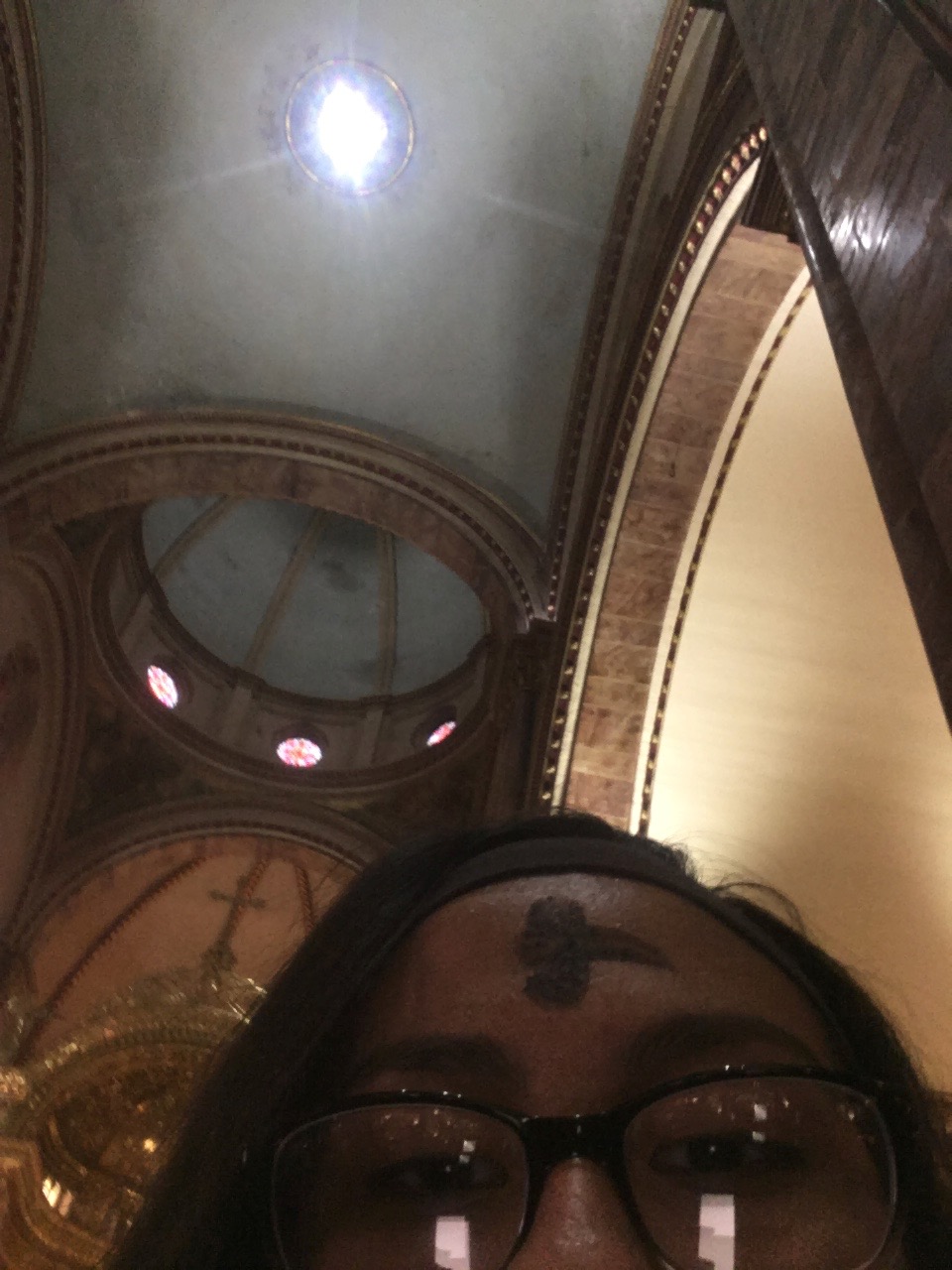 That Friday, four other fellows and I made our way to Salinas. This trip would be my third visit to the coast– I visited El Troncal and Machala with my host family and went to Playas for Training Seminar 1. I was excited for this trip because it felt like I could finally see the coast and just chill. We spent most days sleeping in until noon and then made our way to the beach where we spent more hours asleep but this time under the sun. I returned from the coast on Wednesday afternoon and by that Friday, I was already in the north kicking it with other fellows. 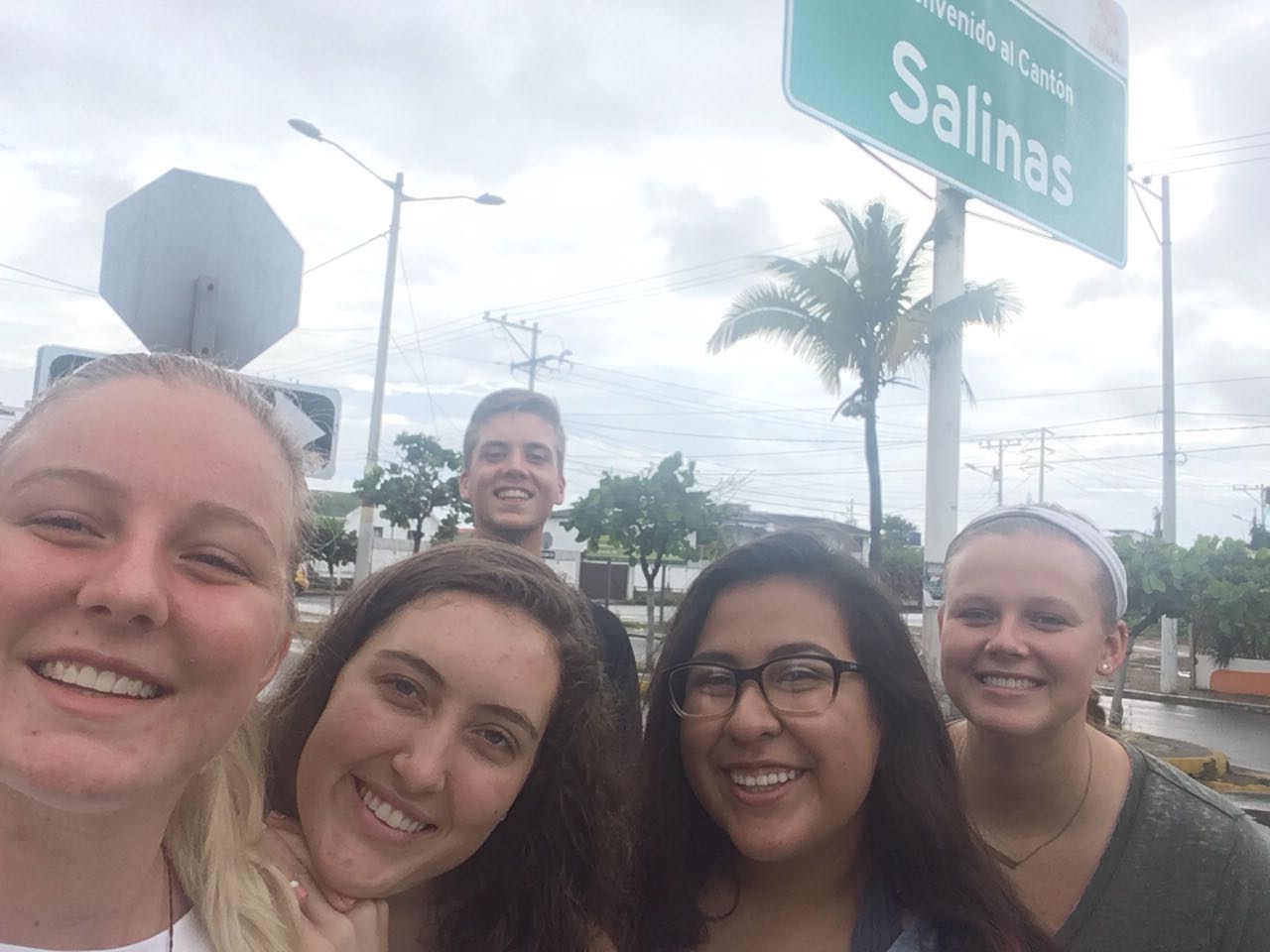 As you could imagine, the north of Ecuador is very different from the south. I enjoyed being able to know the communities and environments some of my closest friends in the program are experiencing. In the north, I visited Pijal, Otavalo, Ibarra, Chaltura, and Cotacachi in 5 days. While I was still in the Sierra of Ecuador, it felt like a completely different world. I suddenly had el acento cuencano and I actually had opinions on the quality of my almuerzos and salchipapas. I was able to recognize the meals on my plate but my host mom wasn’t around to critique what spices were missing. 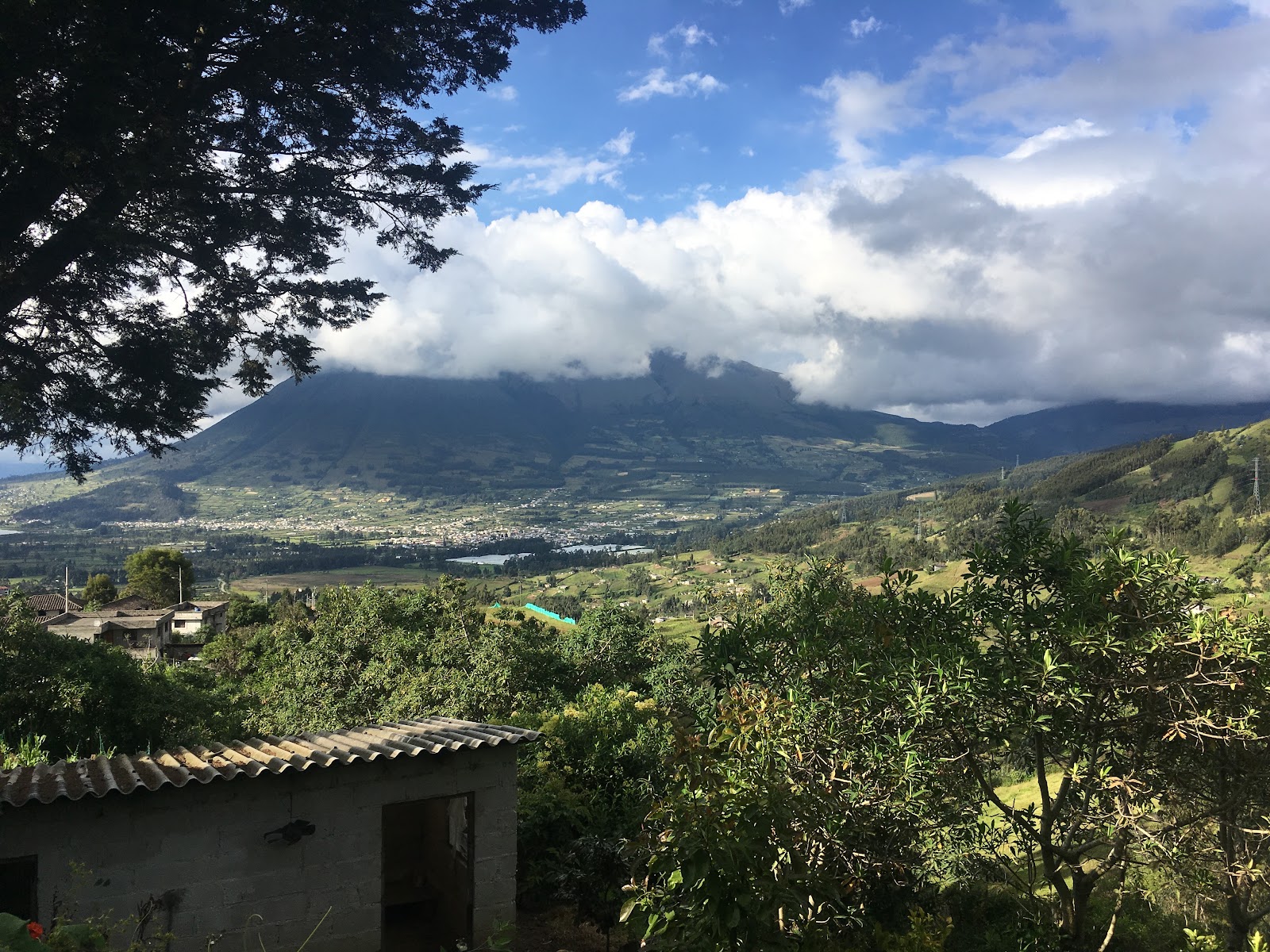 At the beginning of my year, I really struggled on making friends. Being the only one from my city, I was sure it’d be impossible to make friends with the random strangers in my program and town in a foreign country. But with my first friend here, Chris, I learned that connections will come in every way possible. And I also learned that true friendship can’t be defined through distance (if someone told me this when we originally got put in northern and southern hubs, I would’ve probably hit them. Look at my progress). 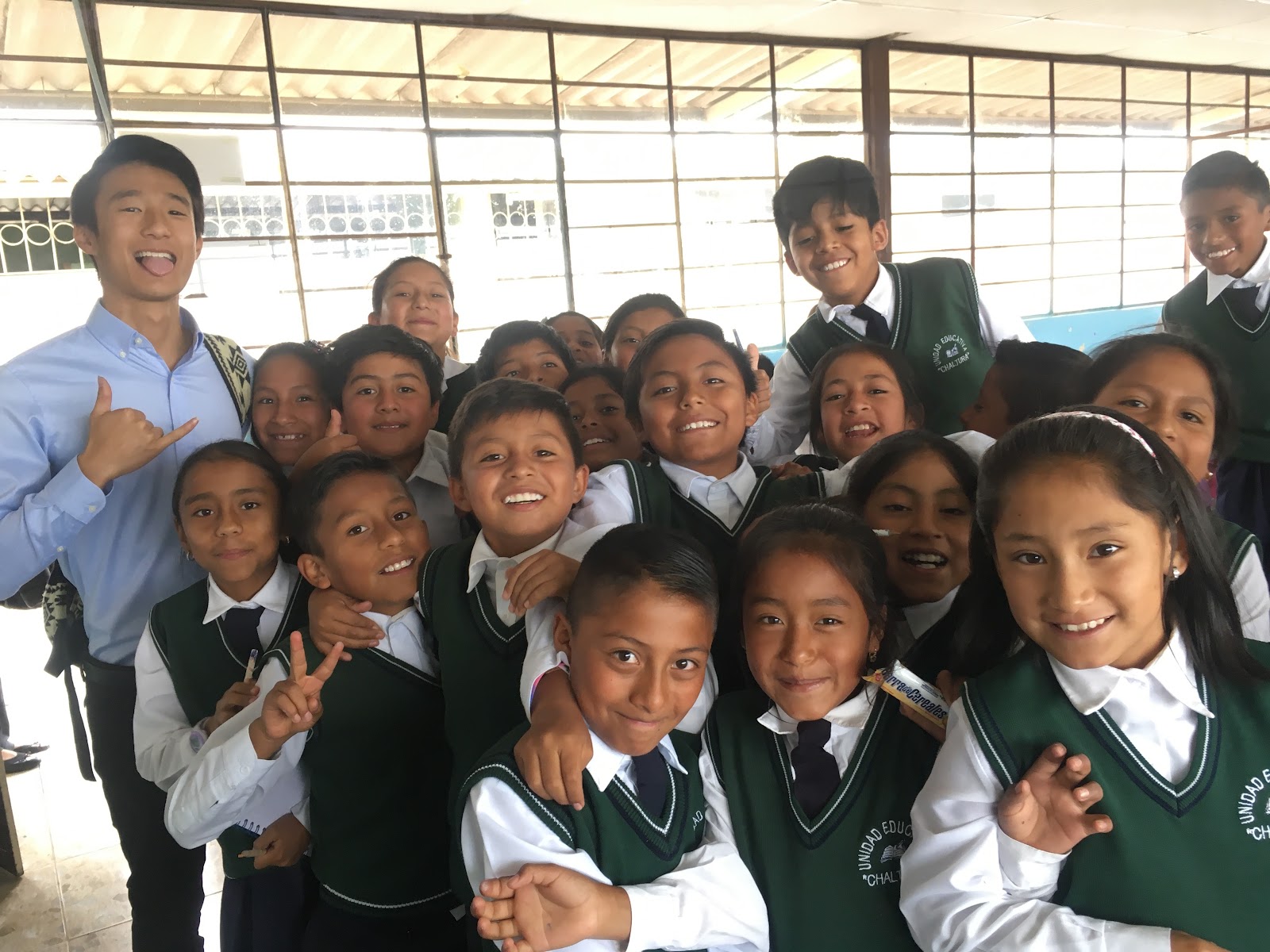 chris and his class

And with Joe, an unlikely white boy who gives me heartburn, I learned the importance of being understood. Back in Chicago, I never had the need to explain myself because my friends and family all spoke the same language. And I’m not talking about English. I am talking about feeling a sense nostalgia when anything from Kanye’s College Dropout came on or knowing what Southside and Westside means or knowing that it isn’t uncommon to have a flag with floor stars on everything you own. When I got to Ecuador, it felt like nothing I said made sense. I was always trying to explain a saying to my host family in my limited Spanish or struggling to explain my insane high school to other fellows. When Joe and I had our first heart to heart conversation, it felt like I could say anything or nothing and my point would get across. Throughout my time in the north, I was grateful to have these two people by my side. 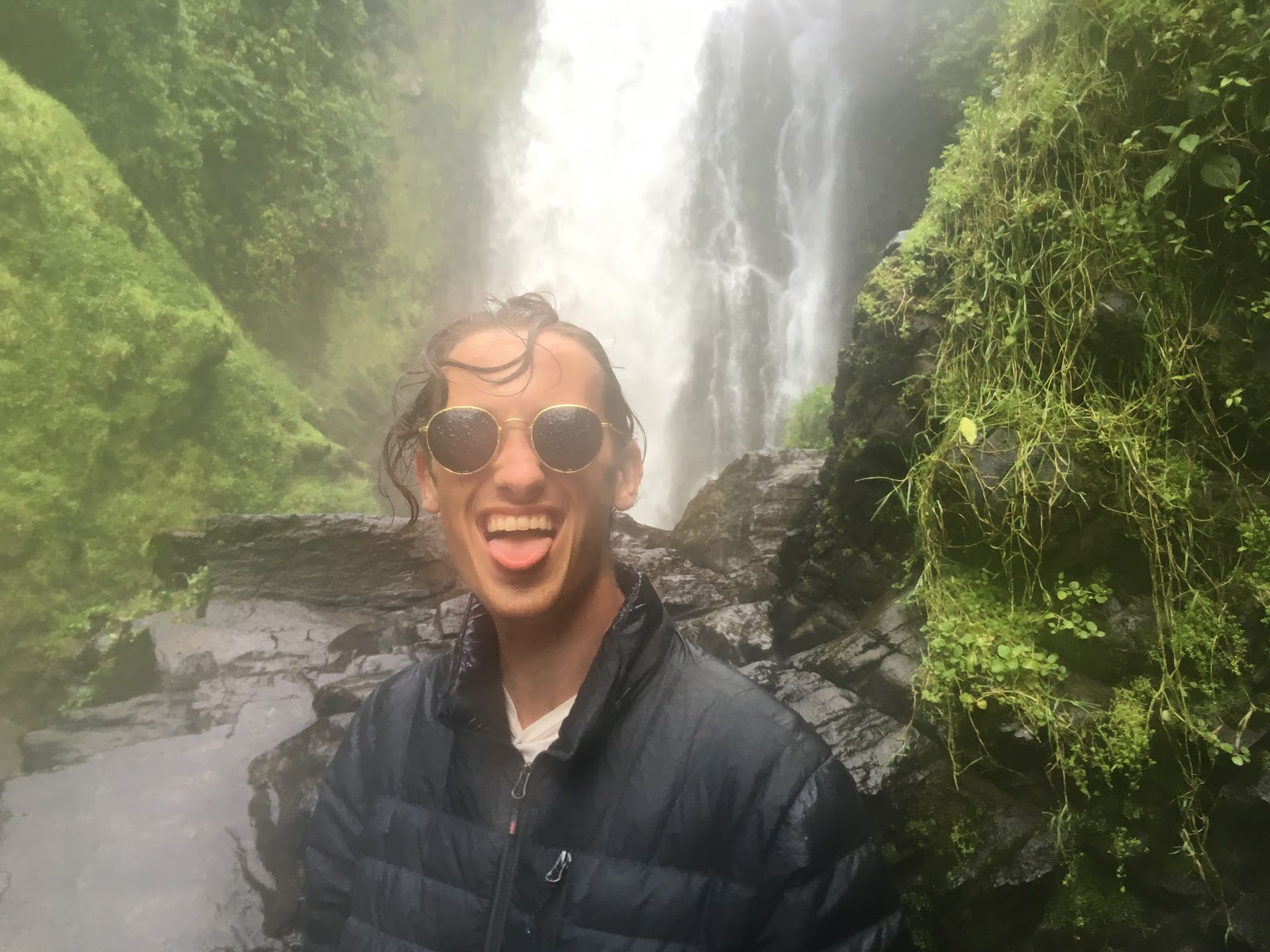 I made my way onto the bus back to Cuenca and could feel the tears welling up in my eyes. I was leaving my best friend in the program a third time– you’d think by now I’d be able to say “see ya later” without bawling my eyes out. It started to rain as my bus began to pull out of the terminal and I felt like an early 2000s music video as I listened to Marvin’s Room and stared out the window. I eventually fell asleep and 11 hours later I rolled into the terminal in Cuenca. The icy bus ride and car sickness was followed by a taxi ride that gave me a great view of the Centro Historico of Cuenca. Looking at the Cathedral and red rooves all over the city made me suddenly forget how terrible the last 11 hours were.  There was a nice comfort being able to the taxi driver where I needed to be and not have to worry that he would rip me off or try to take a longer ride because I know that route like the back of my hand. The cab pulled up and the cab driver was slightly ticked because I paid for my $3 ride using a 20 –for those of you who can’t relate, just know it is very impressive to break a 20 anywhere that isn’t a gringo restaurant or a bank.

After two weeks of sleeping in hostels and borrowed beds, I had to dig out my house keys from the bottom of my bookbag. When I got the door unlocked, I dropped my bags in the living room. I heard blenders whirring and the steam being released out of pressure cookers. I stepped into the kitchen and saw my host dad at the stove and my host mom was chopping carrots. They both looked up at the same time and a smile gw across their faces. My host dad hugged me and my host mom soon followed. “Ya era hora de que llegaras a casa!” In February, I traveled over 3,110 kilometers (roughly 1932 miles, for you American readers) and my favorite destination was a yellow house on Avenida Ordoñez Lasso. 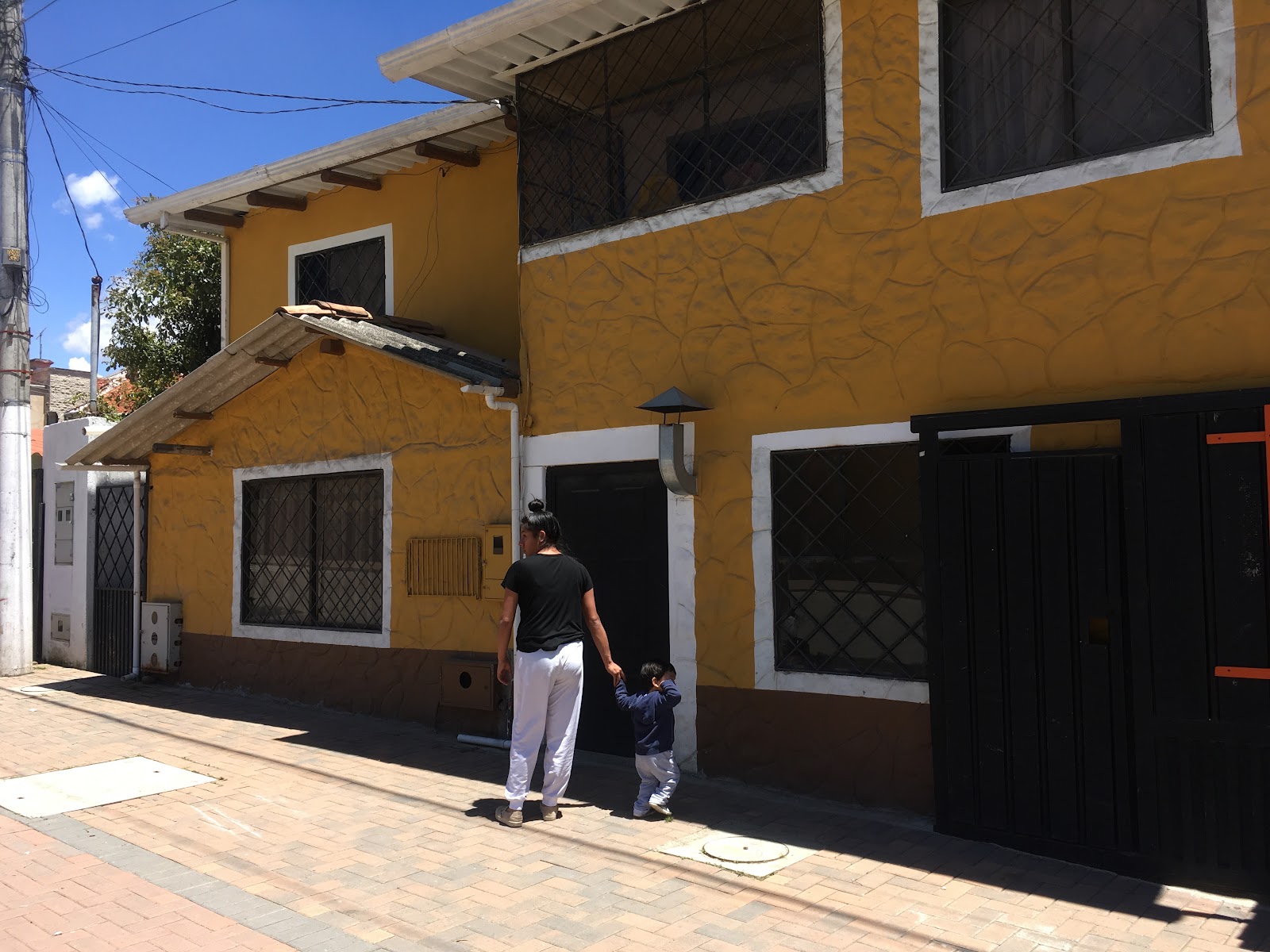 For my friends that I will see very soon:

Alexandra Moreno is passionate about social justice and equity. She is involved in multiple cultural groups, youth activism, and leveling the education inequality across Chicago. Her goals for the year are to experience and appreciate Ecuadorian Culture while also pushing herself out of her comfort zone to experience the larger world around her. Her favorite quote is by one of her role models, Chance the Rapper: "depending on the story that you're telling, you can be relatable to everybody or nobody. I try and tell everybody's story."