The time when I was crucified and kissed by a priest

The diversity of Brazil is ubiquitous: myriad of sweet juicy fruits, numberless species in the fertile oceans and influences of cultures and religions from around the world. Through colonization, African religions mixed with European ones, mainly with Christianity, and formed unique religions found only here. Still, Brazil is predominantly Christian with 80 percent of the population following the Christian religions, and so Easter is an important period here. However, I did not expect it will be that important.

Each Maundy Thursday, there is organized a little traditional ‘theatre’ piece during church mass. This year, as any other, the local priest was looking for 12 lads from 18 to 30 years old to act the disciples, and I was one of them. It was Wednesday night and the priest called us to come to church for a rehearsal. My host-brother André and I were in a playful mood, innocently joking about the idea that we need to have a rehearsal of washing one’s feet. We met up in the church and the lively priest greeted us fervently. We proceeded to try out clothes and then the priest introduced us to the whole idea and told us very thoroughly what we will be doing. In my little town in Slovakia, there was never a theatre piece in a church. Here it is customary. I come from a Christian background, I even used to be an altar boy. The priests in my church also kept this tradition, only in a simpler form: instead of washing feet of ‘Disciples’ they washed the feet of altar boys. I thought: ‘’There is nothing new here, I have got this”.

The sound of a 19th-century pipe-organ was reverberating through the church. In the middle of the mass, a tall hirsute altar-boy brought a towel to the priest, who slowly gird the white towel around his waist so that other part stayed spread in his left hand. He kneeled down to the first disciple, a 25 years old lad with two earrings bowed his head respectfully towards the kneeling priest. The ‘padre’ caringly took his barefoot with one hand and with the other he grabbed an elegant jar made of porcelain and gently pour the water from inside on the disciple’s foot. Then, he dried his foot until it was completely dry, kneeled down even deeper and with closed eyes pressed his lips against the bare foot of the ‘Disciple’. The voices of the pipe-organist and the chorus made up mostly of old ladies from the neighbourhood, combined with the sound of the music, took a control of me as I was looking at the priest who repeated this humble gesture. The priest approached me, and I smiled. It was such a beautiful act in an emotional atmosphere, that even me, who is rather leaning away from these Christian traditions, felt somehow drawn in. 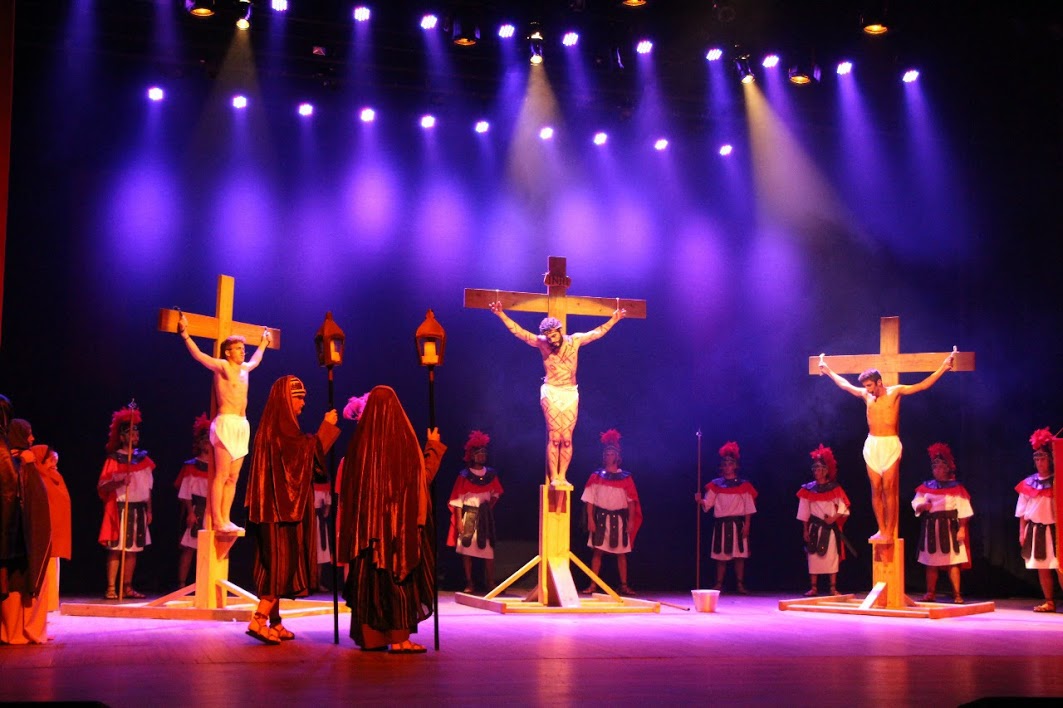 The use of theatre, apart from making any demonstration much more vivid, has one more function- it brings the community together: the audience and actors alike. During the same period, invited by my uncle, I briefly joined a theatre group which was in the middle of preparing another religious and traditional theatre piece: The Passion of Christ, presenting the crucifixion of Christ and the events leading to it. I was supposed to act the ‘Bad thief’. Around 100 actors got together for 6 whole afternoon rehearsals to present this spectacle twice in front of 900 spectators. With each rehearsal, we were getting better and better, and finally, the day came. People watched silently and attentively, although almost all of them knew exactly what is going to happen. People like the actors cried at the end and seemed to really enjoy the evening. Afterwards, we went to eat a hot-dog with my host-family cousins who also participated in the theatre.

These two experiences were highlights of my Easter here, and I am looking forward to bring these customs and try to introduce them in Slovakia! 😉