The Freedom of a Turquoise Scarf 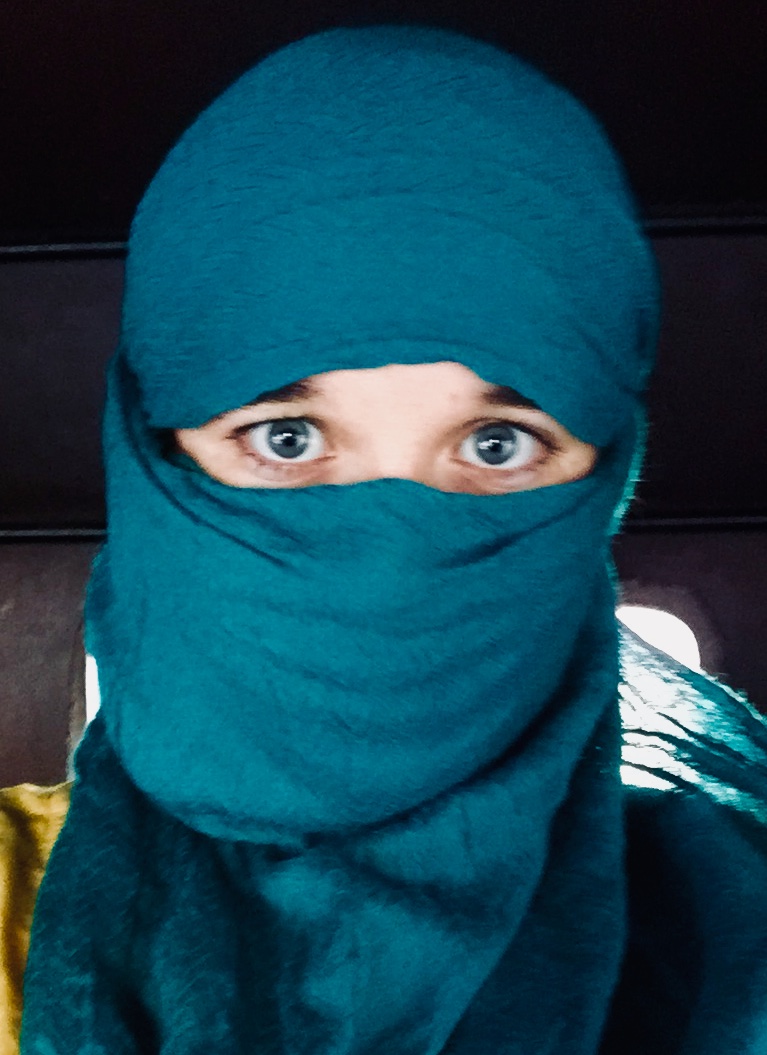 I’m still getting used to it, the tight fabric over my mouth and nose, absorbing the sweat running down my temple. Sometimes I still feel suffocated by it. The turquoise scarf wrapped around my head and face was my aunt’s, and even though I was reluctant to bring it, I know now that it will be my best friend in the coming months. As an outsider coming to Pune, I was puzzled about the women covering their faces with dupattas (scarfs), but after noticing the majority of women wearing it in traffic, I assumed that it was against the air pollution of the streets. Now I had a mask of my own, one that you see in all the pictures of people in heavily polluted and overpopulated cities, so I thought I was clever and prepared. Though, as the first weeks have passed,  I have used it less and less, not due to its’ function disappointing me but because of the increased stares and double-takes I receive when wearing it. A white foreigner wearing a doctor’s mask apparently isn’t something most Pune locals see every day (I have honestly only seen 12 white people since I came to Pune almost 5 weeks ago (yes, I am counting)).

A few days ago I started wearing the scarf like the other young women here do. The change was like the differences between Swedish and Indian traffic, vast. Suddenly I felt like I was invisible as if the scarf somehow was the reincarnation of Harry Potter’s invisibility cloak. Instead of people making eye contact with me for several seconds as I walk by them, they kept doing whatever it was they were doing. All the unwanted attention had evaporated by this magical turquoise scarf! Alast, freedom! No more confused looks when I boarded the bus, and fewer uncomfortable stares when walking by a group of men. Never did I imagine that covering my whole body and face in loose-fitting clothes would bring so much liberty. But it does.

When wearing my kurti, sandals and turquoise dupatta I almost smirk as I walk down the streets, thinking: if only they knew I was a foreigner…

One of our Team Leaders, Zooni, was describing this sense of freedom during our first week, but it took me this long to truly realize it. Many of the fellows have felt restricted by the conservative norms regarding women’s’ clothing in India, but Zooni’s explanation that wearing the local clothes is what gives her freedom has resonated with me much more. It takes the focus away from my biological characteristics and emphasizes more on my words and actions, aspects of myself which I actually do have control over. I want people to judge me by the content of my character, not the colour of my skin nor the shape of my body (shoutout to M.L. King).

It is not to say that I don’t think we women should stop fighting for the freedom of wearing whatever we want while doing whatever we want. That is definitely a goal, but I’ve realized that wearing shorts and halter tops in Pune is not going to get me there, and will only restrict me. I especially have no place as a foreigner, oblivious to the nuances of the culture, to come and think that by wearing my tight clothes it will change people’s mentalities. If change is to come, it is to come by conversation and discussion. Ultimately, it should come from within, from the locals themselves. And I am here to support, but not primarily to change. These 7 months in India are for me to absorb and learn from my environment, which is done at its’ best behind my dupatta, blending in with the colourful crowds of my new home.

Let's see if you can spot me next time, I’ll be the one in the turquoise scarf.

Celia is passionate about languages, music and the outdoors. When growing up she spent most of her time outside in the tropical jungle of Costa Rica, if not playing the flute or singing. She is a UWC student involved in feminism, vegetarianism and overall social and sustainable development. In the future, she wants to work with the development of educational systems, as she sees them as the root of social change. Her goals for the year are to gain a deeper understanding of Indian culture and herself, become even more inspired to work with education, learn as much Hindi as possible, feel belonging in a place where she normally wouldn't and, very importantly, to make memories with people whom she will never forget. Her favourite quote of all time is: "Change is the only constant" by Heraclitus, as she sees is as undeniably true.