Almost exactly one month ago, I welcomed you to this blog with a short, informational, and gif-filled post. I now sit on my bed in an apartment in Quito, trying to reflect on the past 33 days while the evening news blares from the TV in my host mother’s room and my family’s two perritas, Luna and Pouppe (pronounced Poo-pay) create a concert with their barking. I can’t say that 33 days ago I had no idea what I was getting into, but I can say that I had no idea how amazing and rewarding this experience would be.

What have I done since then? At Pre-Departure Training, among the natural beauty of the California Redwoods and the picturesque Stanford campus, I connected with the Global Cohort, a group of more than 100 passionate and inspiring individuals from around the world. We learned from past alumni and program leaders about how to face the challenges and savor the successes of this year, and from dozens of distinguished speakers on topics ranging from storytelling to microfinance to meditation.

I am now in the midst of my third and final week of living in the capital of Quito. I’ve sumitted a volcano, sampled (more like gorged on) street food, experienced a magnitude 4.6 earthquake, and had countless awkward exchanges due to my slowly developing Spanish ability and cultural understanding. While I’ve entered into a routine, each day poses new obstacles and provides new victories. To share more about my life here in Ecuador, the rest of this post will be dedicated to some photos and captions. [For more regularly-posted photos, friend me on Facebook and follow me on Instagram (@aden_shmaden)]

I am currently living with a family of four, however most time at home is spent with my host mother, Paola, and the two dogs, featured below. Below that is a panorama of my room. Unlike the somewhat more traditional hectic Ecuadorian family lifestyle, this family likes to keep it low-key. Most of our outings center around food; over the past two weekends, I’ve sampled cuisine from two different mall food courts and wandered around El Centro Historico, the historic center of Quito, a popular tourist destination for its many churches and architecture. Street food in Quito is hit-or-miss, but always cheap. You have to be careful though; one wrong choice and you spend all day in bathroom. The third picture is a tray of french fries, hamburger meat, and eggs. The food tasted much better than it appears in the picture. 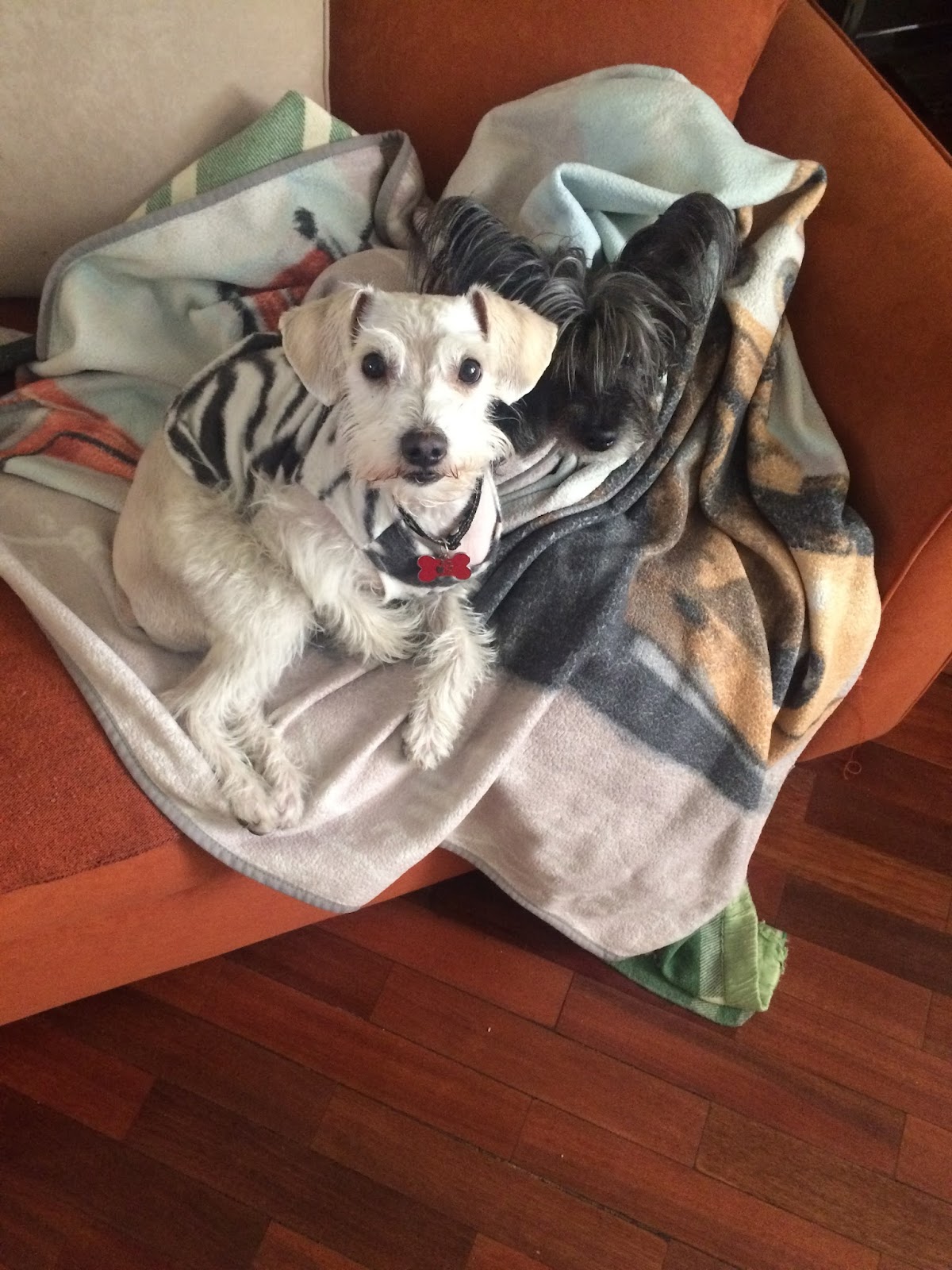 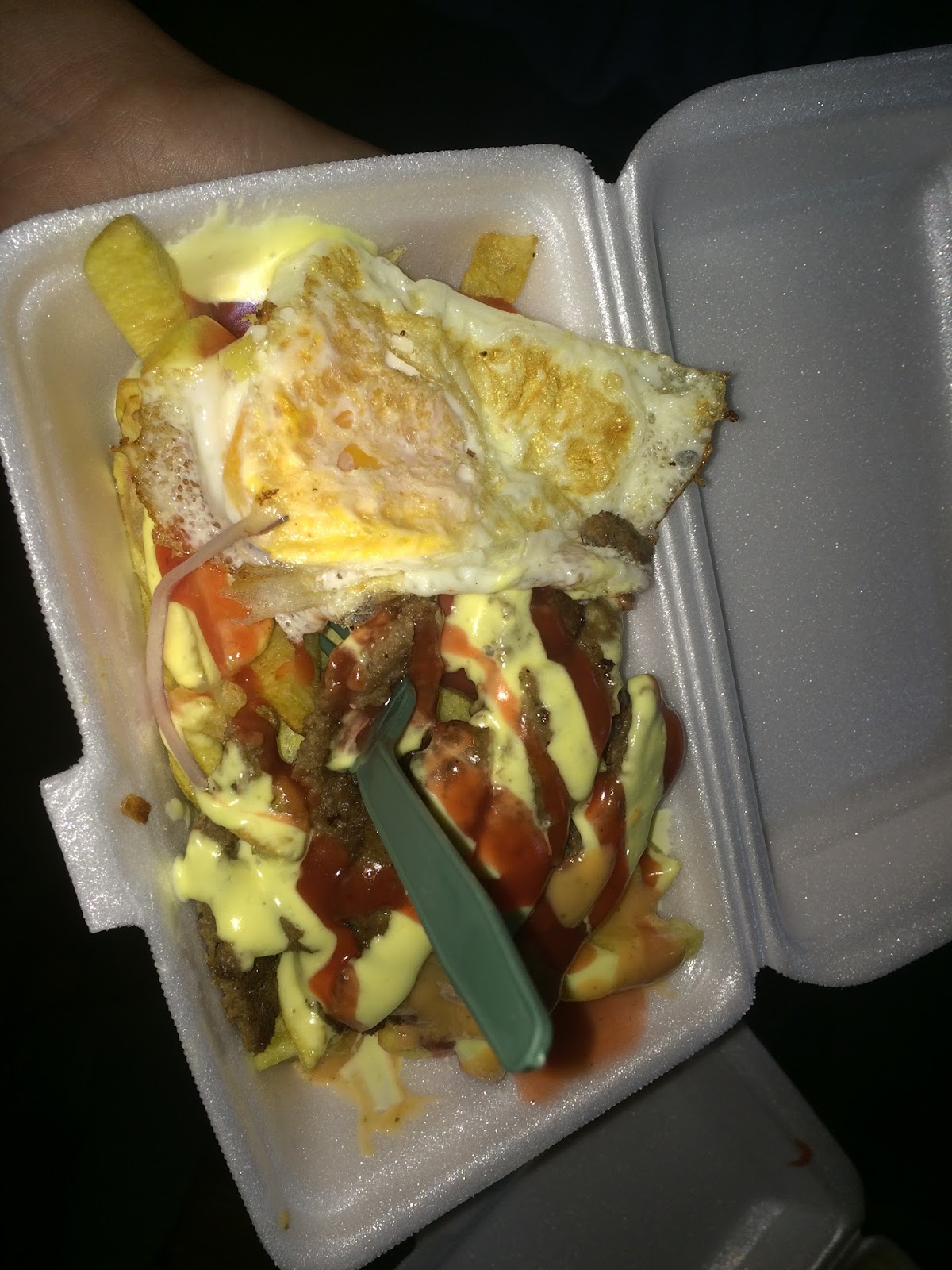 Quito is located in a valley surrounded by towering mountains (and active volcanos). In the morning the skies are clear and you can see all around. Below is my view walking to Spanish class, which we have for a few hours each morning. The classes are similar to traditional high school Spanish classes, but have a few major differences. For example, it is a complete immersion environment; as soon as you enter the room, speaking English is prohibited. Also, class sizes are between five to eight people and are discussion based, focusing on Latin-American and Ecuadorian culture, politics, and more.

To test our abilities in the real world, the classes take excursions into Quito as well. During the first week, we took a tour of the Guayasamin art museum, which houses the complete collection of the legendary Ecuadorian artist Oswaldo Guayasamin. Below you can see one his installations, which reads, “I cried because I didn’t have shoes until I saw a child who didn’t have feet.” This week, we’ve gone to a fruit and vegetable market and an artisanal market as well.

In the afternoons, we participate in sessions led by the GCY staff on topics similar to those from PDT, yet in an Ecuadorian context. The classes are held in the sprawling Parque la Carolina, where you can find a pedal-boat lagoon, BMX park, outdoor gym, and not to mention courts and fields for any sport you can think of. The next photo below is a picture of the sky I took while we did a journaling activity. 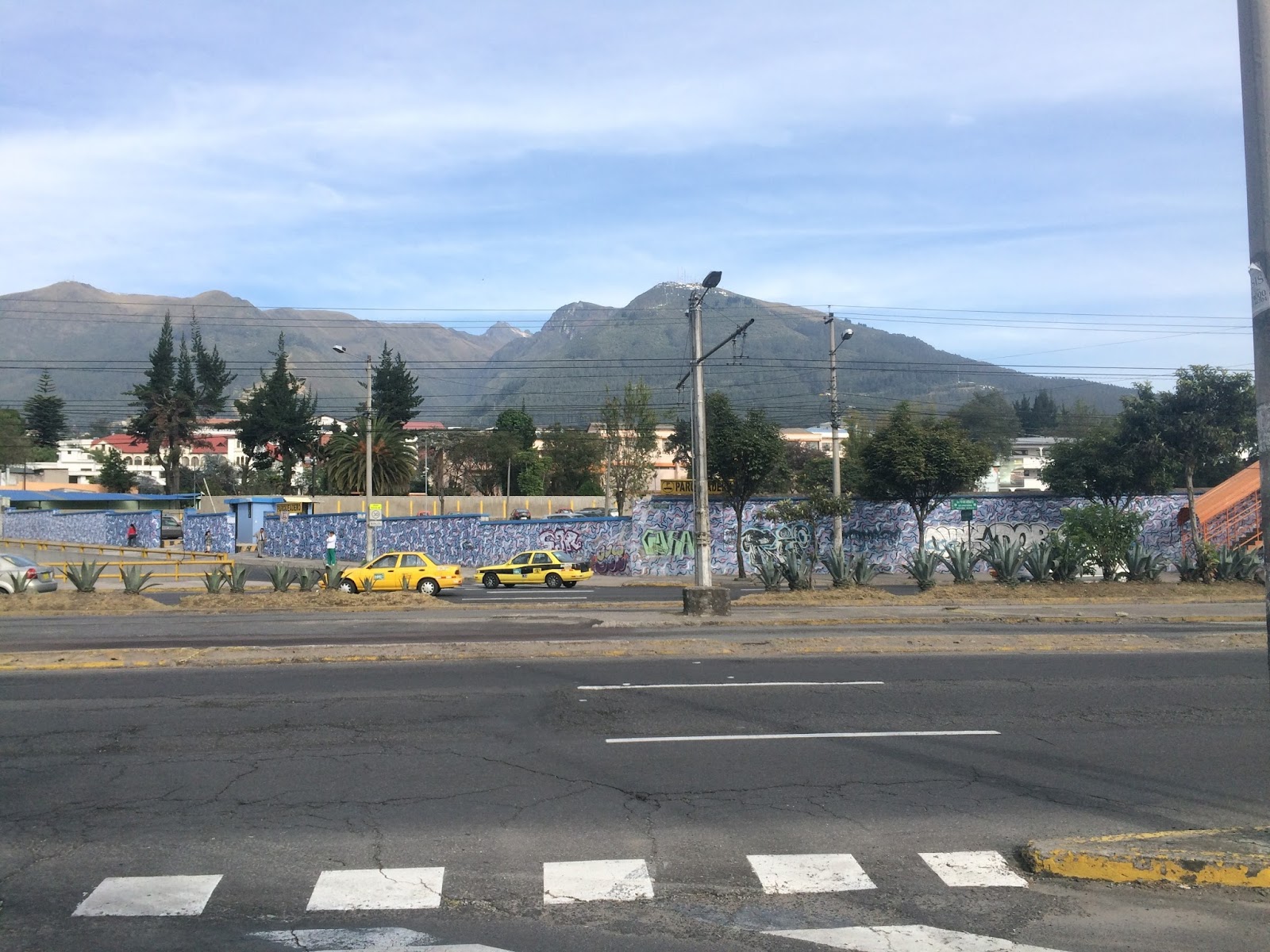 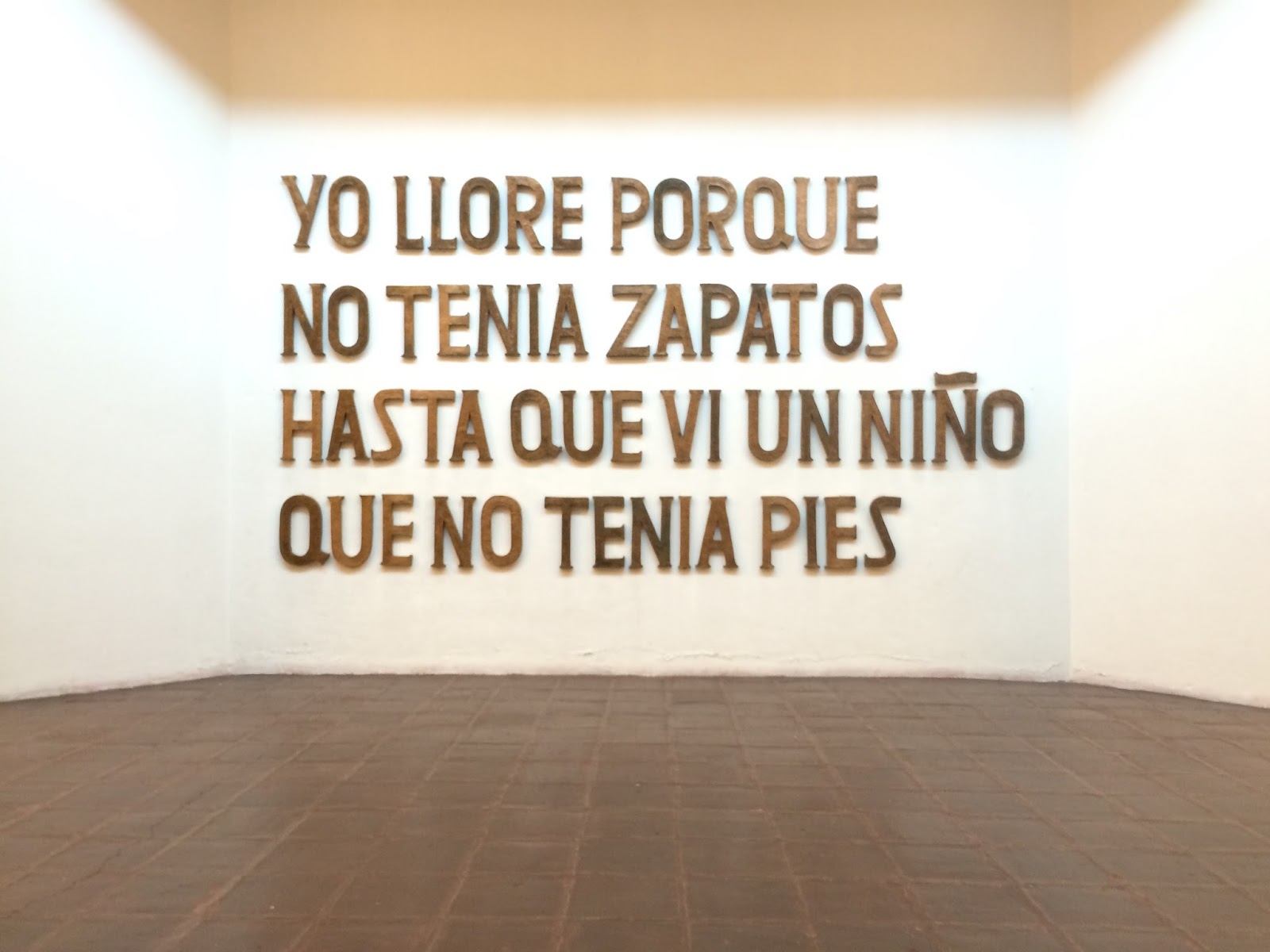 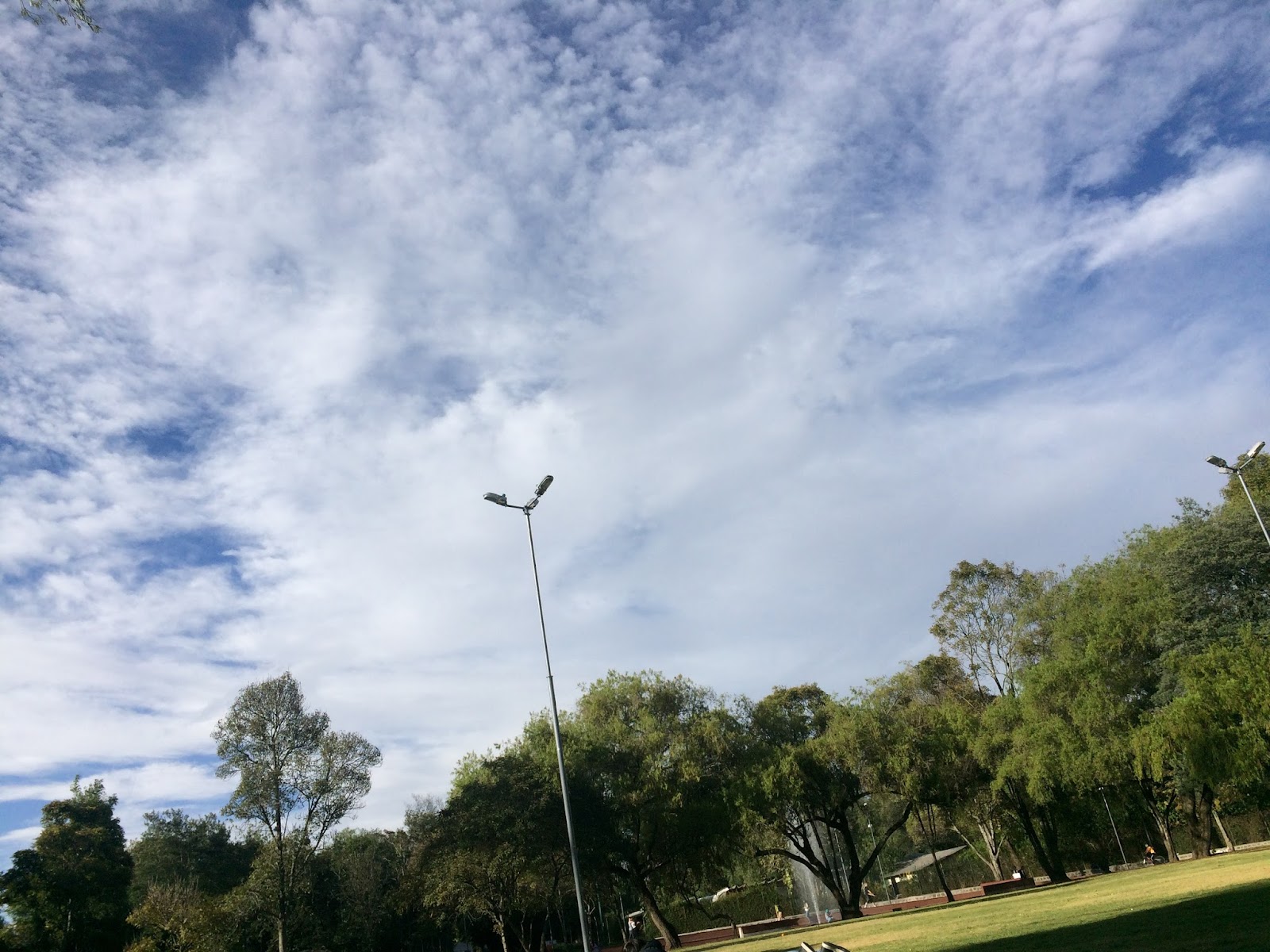 I’ve managed to make some friends along the way! On weekends there are no classes so we use our free time to explore. The first photo is from a cohort organized trip to a food-truck rodeo, which reminded me a lot of home. The next series of photos is from a hike up Pichincha, a 16000 foot (dormant) volcano. It was one of the most difficult physical undertakings of my life, as we had to combat steep climbing, weather, and altitude simultaneously, but the rewards (the views) were tremendous. The next photo is from the cable car ride down from the base, where you can see me exhausted but content.

Yesterday, Spanish classes were cancelled and so a few friends and I seized the opportunity to further explore El Centro Historico. After venturing into numerous old churches (not a common occurrence for me), we climbed a few flights of precarious staircases to reach the top of La Basilica de Voto Nacional, the largest neo-Gothic basilica in the Americas. The photo is a photo of the two clock towers of the Basilica (neither showing the correct time) on the opposite end. You can also get another view of how far Quito extends. From any tall enough building across the city you can see so much because of Quito’s horizontal expansion (as opposed to vertical expansion found in many American cities). 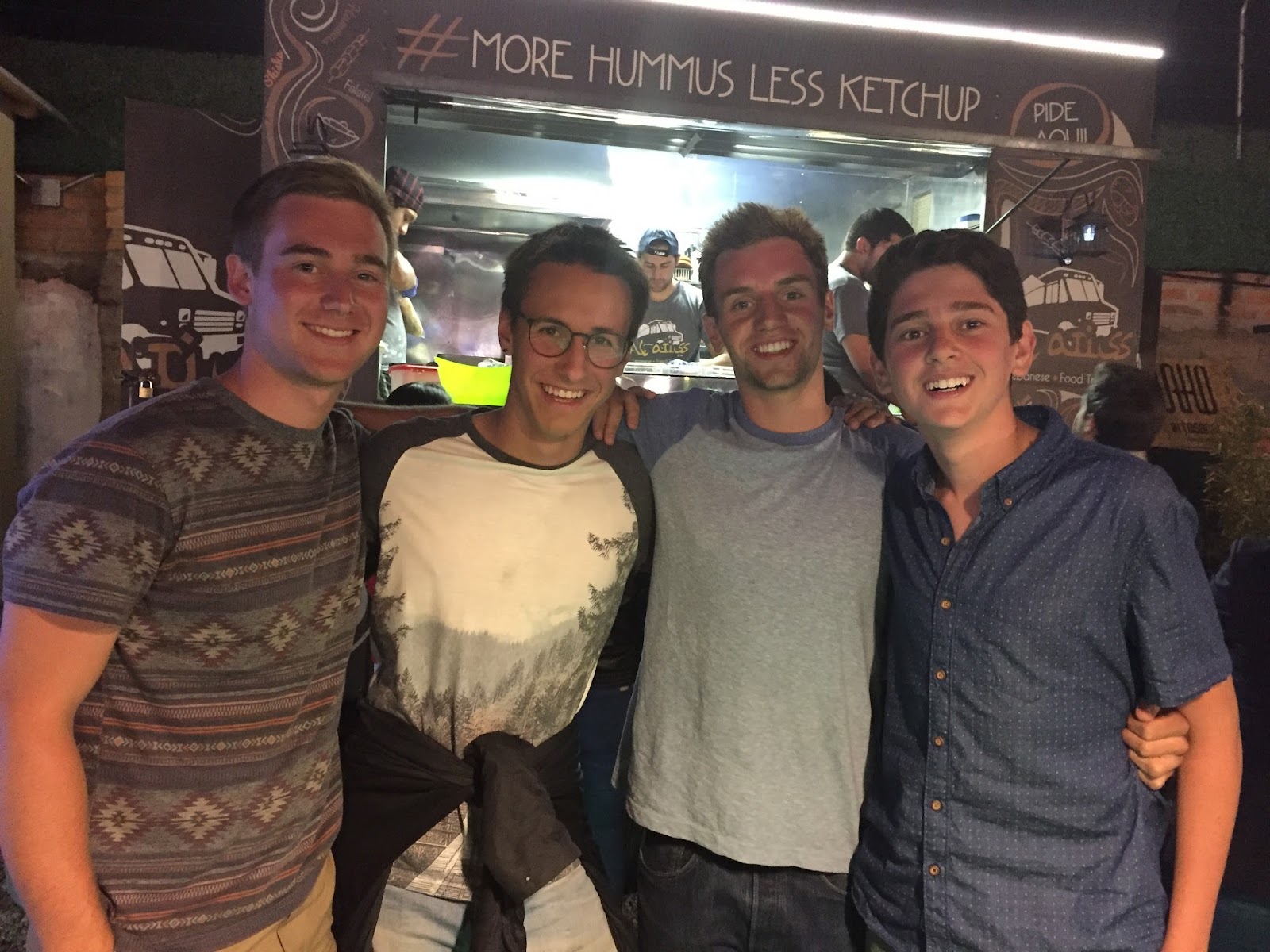 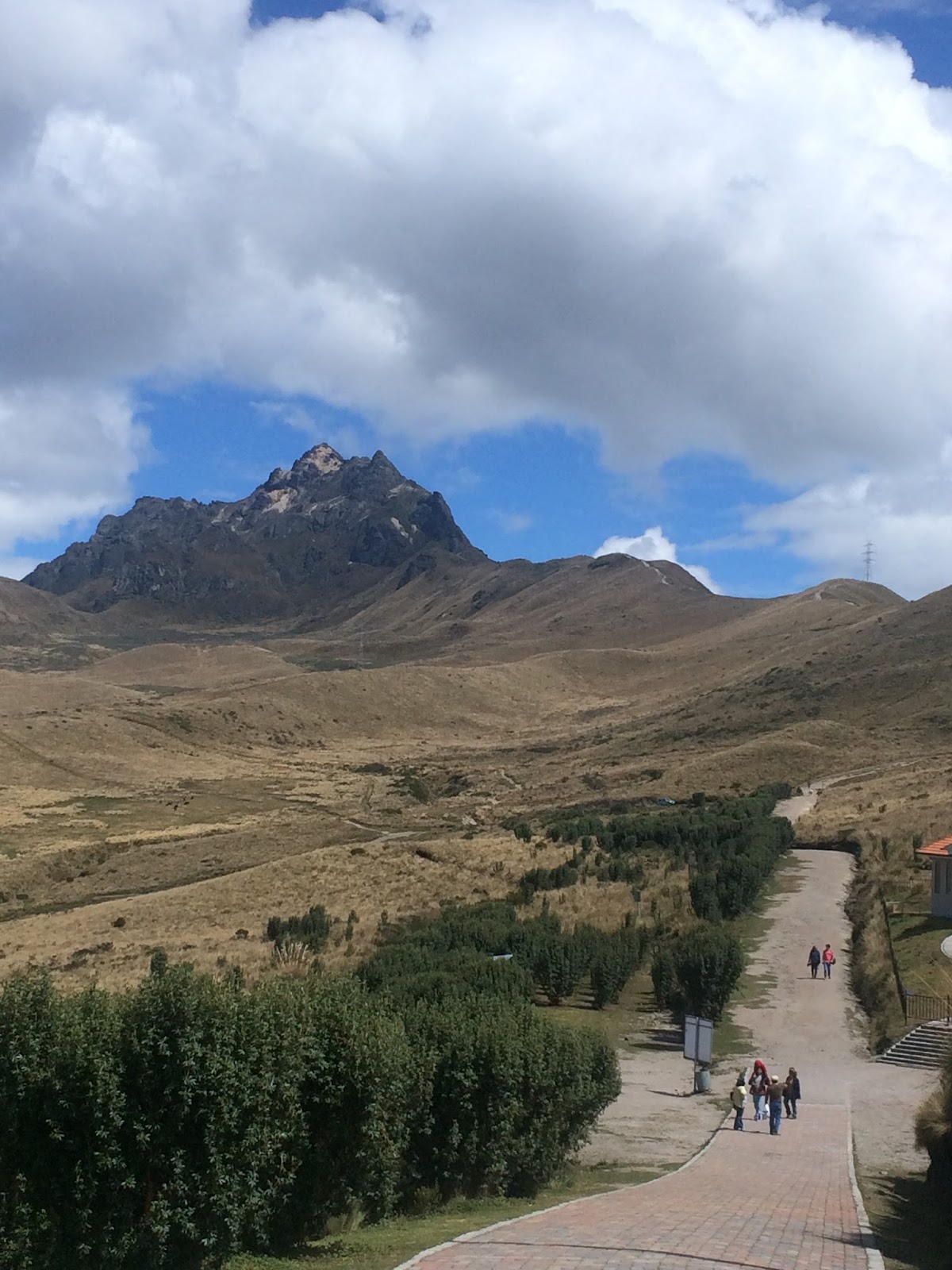 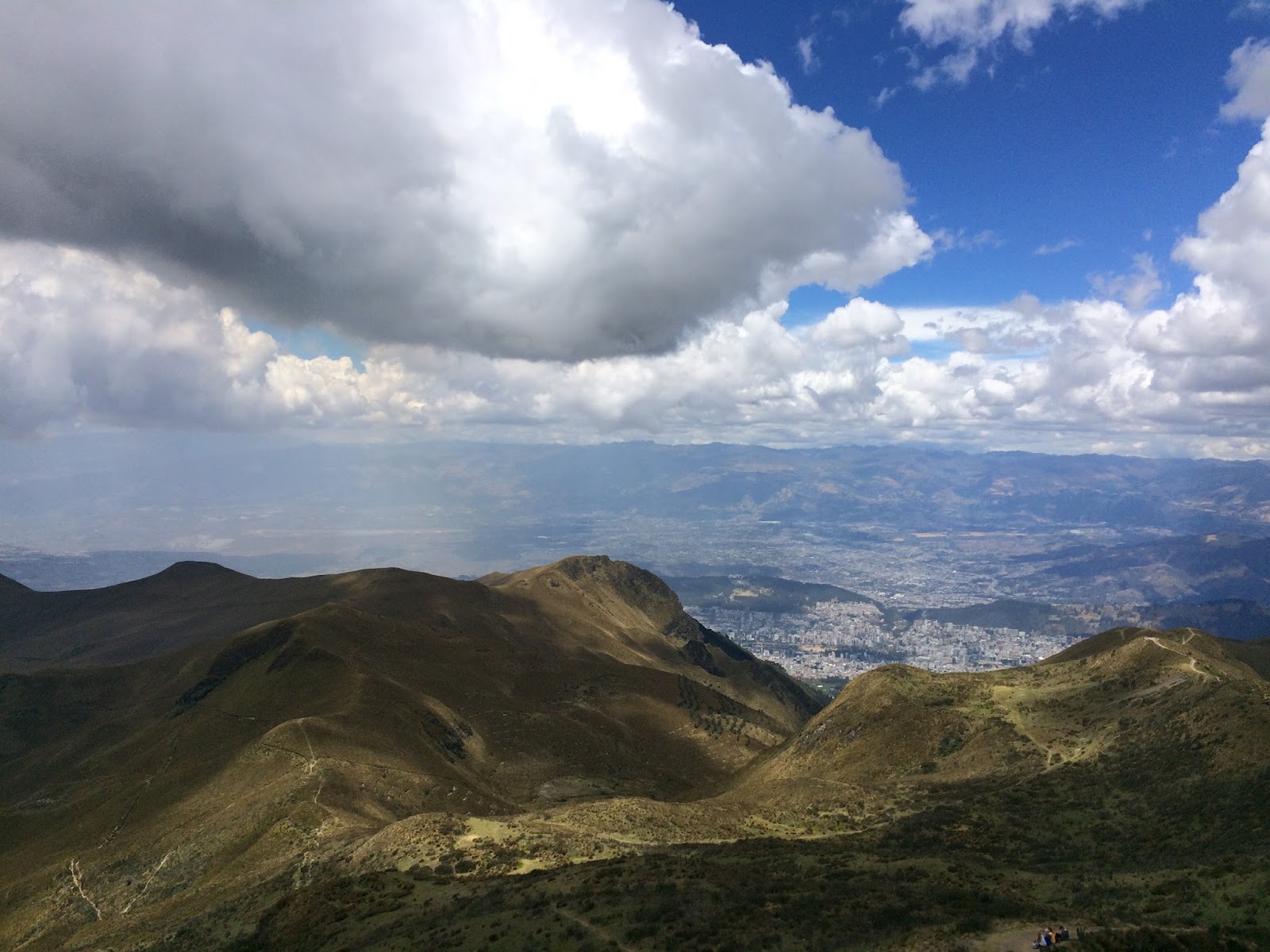 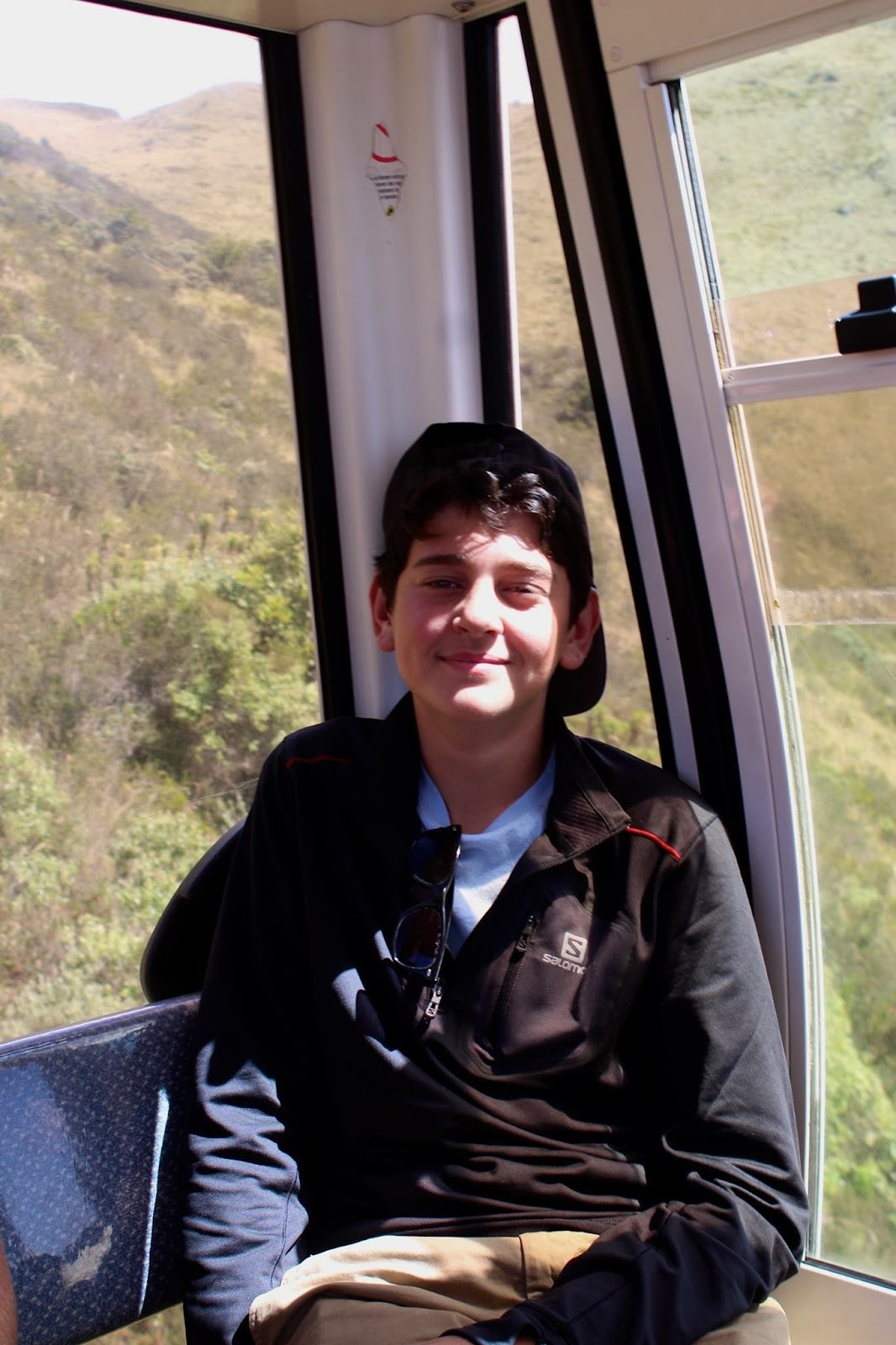 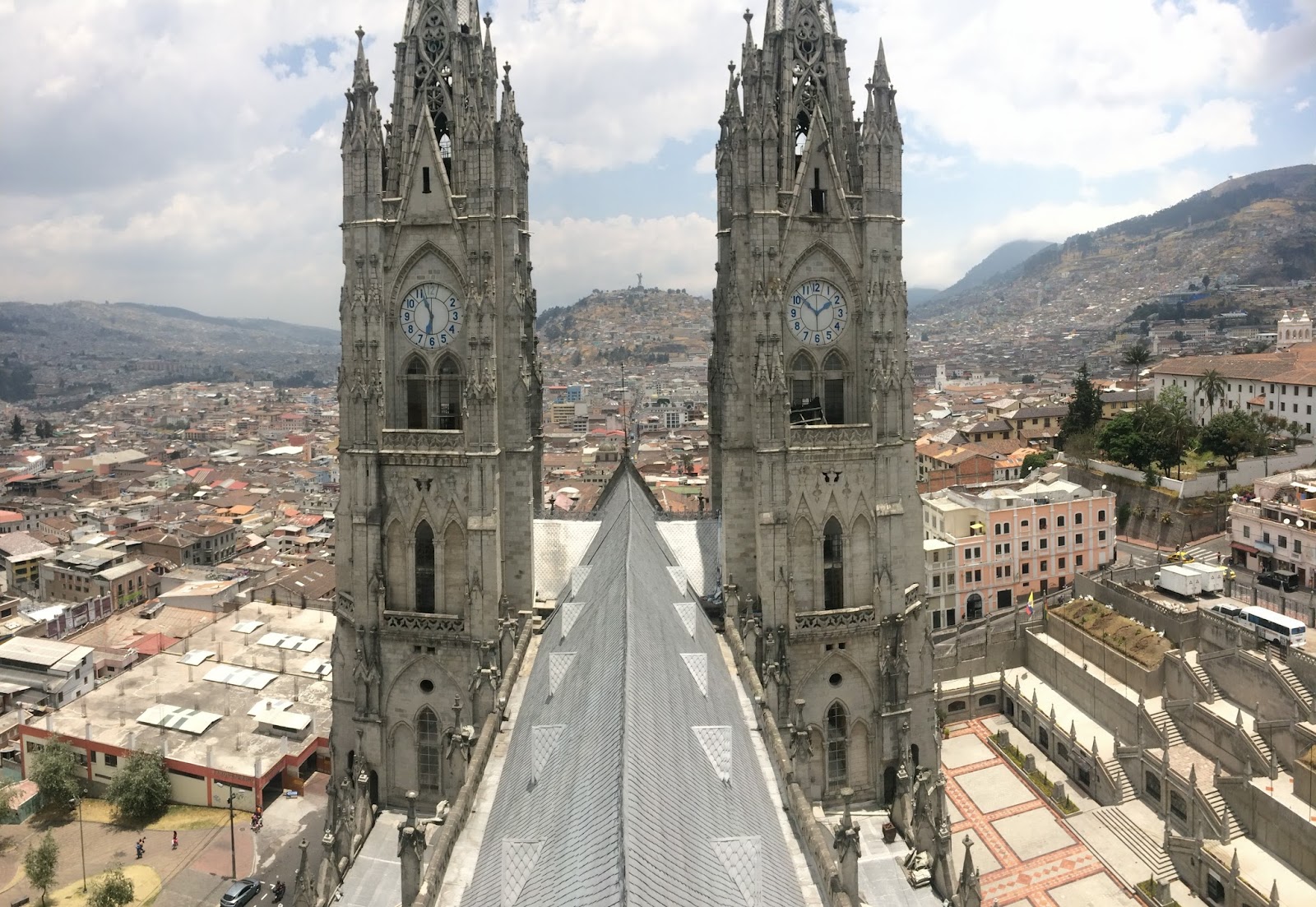 Congratulations on making it to the end of this blog post! Your reward is the information about where I’ll be heading next! This Saturday, I’ll leave Quito and head south to the small rural community of Bella Union, located about an hour from Cuenca, the capital of the Azuay province. In “La Bella” I’ll be living with a family of four and working as an English teacher and activities assistant at an elementary school. I’ve had an incredible time in Quito but I can’t wait to get started in my new home!

PS: Here’s a video of my friend Benoit playing the beginning of “Africa” by Toto on the panflute during a recent exploration of music stores in Quito. https://www.youtube.com/watch?v=Z79I3A3tG-8

Aden's main passion (besides UNC basketball) is all things music - listening, playing, creating, and sharing. He leads his school's all-male a cappella group, plays Ultimate Frisbee, and serves as a tutor, mentor, and counselor in the Jewish community. His goals for this year are to acquire new language skills, gain new perspectives, and develop greater self-confidence and independence. His favorite quote is "Comparison is the thief of joy", attributed to Theodore Roosevelt.