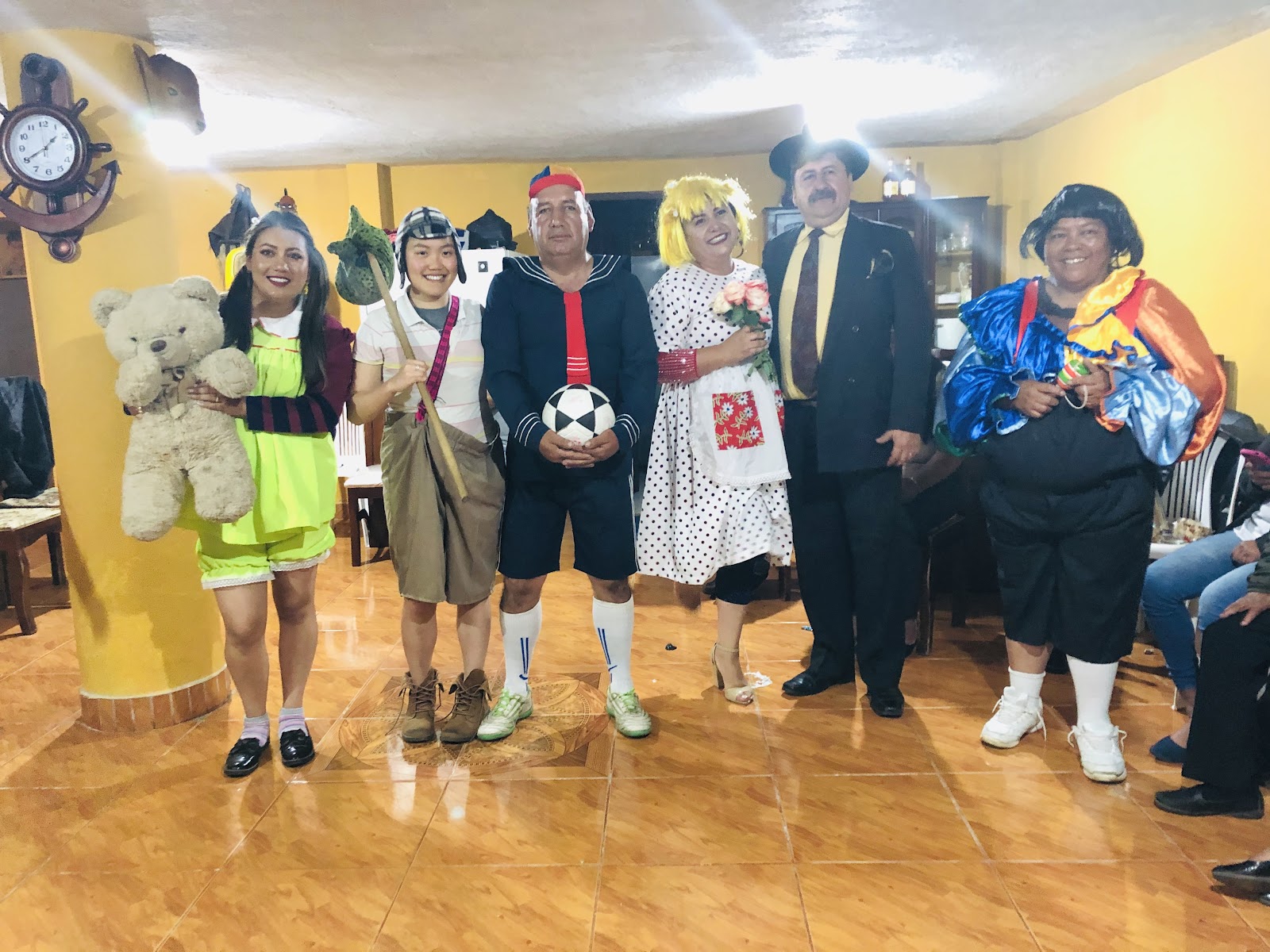 A Manosalvas Fonte Christmas tradition where each family unit prepares a skit with the funniest skit winning a grand prize. Our family were characters from the Mexican comedy “El Chavo del Ocho”, and I was the main character, Chavo. We won the grand prize- a baby cow. ¡Qué chavo!
Context: For my Christmas dinner with my host family, I decided to prepare a little speech to give them the full background behind why I came to Ecuador. Originally, I prepared a Spanish speech for them, but here it is in all its English glory – Palabras de Elaine (Words of Elaine).
When I was about twelve years old, my parents told me we had to go back to live in Taiwan due to personal reasons. They did not know how long we were going to stay in Taiwan, but they estimated that it would only be for a year, at most two years. I had very mixed feelings about this- I was scared because I did not know when I was going to come back to California and see my friends, but at the same time, I was also very excited to go back to Taiwan, see my family, and experience my culture again. And so we went, buying three one-way tickets to Taiwan.
Within a week of staying there, my mom enrolled me into a primary school near where we lived. And to put it concisely, I had a horrible time there. The other children and my teacher were nice to me, but they did not know how to treat me. The children already had their little groups, so I was left sitting alone during break and lunch. I felt very isolated, and I cried every night when I came home from school. Not only that, but at that time, I could not read Chinese. I only talked casual Chinese to my parents, but at school, we were taught formal, academic Chinese, and the children talked very fast and made jokes I could not understand. The month and a half I was there was the worst time I ever had in my life. All I wanted to do was to go back to California. And it was very ironic to me because I was essentially a foreigner in my birthplace – I looked like them but I did not act or speak like them.
It was then that my mom found another primary school that had a special program for Taiwanese kids who grew up in foreign country. And even though the children there were still typical Taiwanese children, they immediately took me in as one of their own. They made funny jokes about the way I acted and my ever-so-slight American accent in my Chinese, but they never excluded me from any of the games they played. Additionally, in my class, there were also two other Taiwanese boys who were in the same special program as me. One grew up in London, while the other grew up in the same Californian city as I did (small world!). Both of them helped me ease into Taiwanese life immensely, with the boy from London eventually becoming one of the best friends I’ve ever had.
In the one year I lived in Taiwan, I not only significantly improved my Chinese, but I also understood my own culture a lot better and grew more emotionally self-sufficient. It was that year that sparked my interest in learning about other languages, cultures, countries, and communities. That year was, and still is, the hardest year of my life, but I would not be here in Ecuador right now without it. In one of my Debrief sessions, my team leader, Annie, asked us, “If I were to give you all a ticket to fly back home right now, would you do it?”
And I thought about what would have happened if I had flown home from Taiwan after a month and a half, before I transferred to the school with the special program. I would not have been able to improve my Chinese, to know amazing friends, to dive deeply into my culture, or even be here now.
And no matter how much I missed my parents and my home, I knew Ecuador was going to be another Taiwan. So I said no, and to this moment in time, my decision to come to Ecuador remains one of the best decisions of my life.
Thanks for listening.

Elaine is passionate about environmental sustainability, existential and moral philosophy, social justice, and the importance of creativity. During high school, she founded a nonprofit that aims to nourish the creativity and sense of purpose among chronically ill children through creating their own fictional storybooks. She was Captain of her school's varsity swim, played the drums for marching band, held a computer science internship for 2 summers, and lead her school's Biology Club. Her goals for the year are to achieve fluency in conversational Spanish, gain insight into a culture vastly different from her own, and most of all, streamline all her varying interests and passions into a common theme to enter college with a renewed sense of self. One of her favorite quotes is "Life is like riding a bicycle. To keep your balance, you must keep moving." ~Albert Einstein