The other day, as I watched ten grown men attempt to load a fully grown bull into a rusty old pickup truck I once again found myself thinking, “Huh, didn’t think I’d ever see that.” I find myself thinking that phrase quite often nowadays. At least once everyday, I see something I couldn’t have come up with in the deepest parts of my imagination. And I can’t help but think, what a fun way to live! I love being exposed to the most bizarre scenes, the oddest phrases, and the most interesting people. As my time is coming to an end, I thought I’d take some time to look back on my never dull time here in Pambal. Also, in case you were wondering, the men were successful in loading the bull, but only after he went to the bathroom all over one of them.

One of the oddest, and most overwhelming, things is transportation in the villages. As we’re not allowed to take motorcycles, which is almost an unnecessary rule because once you see one drive here you never want to get on one, we have to take other forms of transportation. (P.S. in case you don’t believe me about the motorcycles, I saw a man riding one with a full swivel desk chair in front of him this morning). I’m reluctant to say cars because that is not how I would describe these. Essentially, in order to get into the only town close to us to buy basically anything you need, you wait under a tree until you see what, from a distance looks like a pick up truck. As it slowly gets closer you realize it may have once been a normal pick up truck but not anymore! These old, rusty pickup trucks are taken to the welding shops that are in each town and the back is converted into a seating area. A tarp is strapped onto the top, three benches are squeezed inside and voila, transportation for, I kid you not, at least 20 people at a time. Don’t get me wrong, it’s actually a very creative way to do transportation and it makes it super cheap, but it still is one of the oddest things I’ve seen experienced. The cars start in Pambal so when I get in I’m usually very optimistic, “OK only 8 people. Not too bad!! Not many people can be heading into Tivaouane right now, can they be?”. But my optimism is quickly crushed as I am, physically, crushed into the corner of the bench and the makeshift sides of the car as at least 10 people at each stop push inside. My friend, Izzy, likes to joke about how you have a moment of bliss where you think, OK that’s got to be it. No one else could possibly fit, and then somehow 15 more people fit inside. It’s an honest to God clown car. If there is a woman getting on when there’s barely no space? No problem! A man will get out and climb on top or hang onto the back. Someone has a baby? No worries! Strap it on your back so there's more room! If you’re claustrophobic, this may not be the activity for you, but I love it. Everyone is yelling and laughing and it, in a small way, shows the values they have for community- that they will never tell anyone they can’t join, they will always find a way. 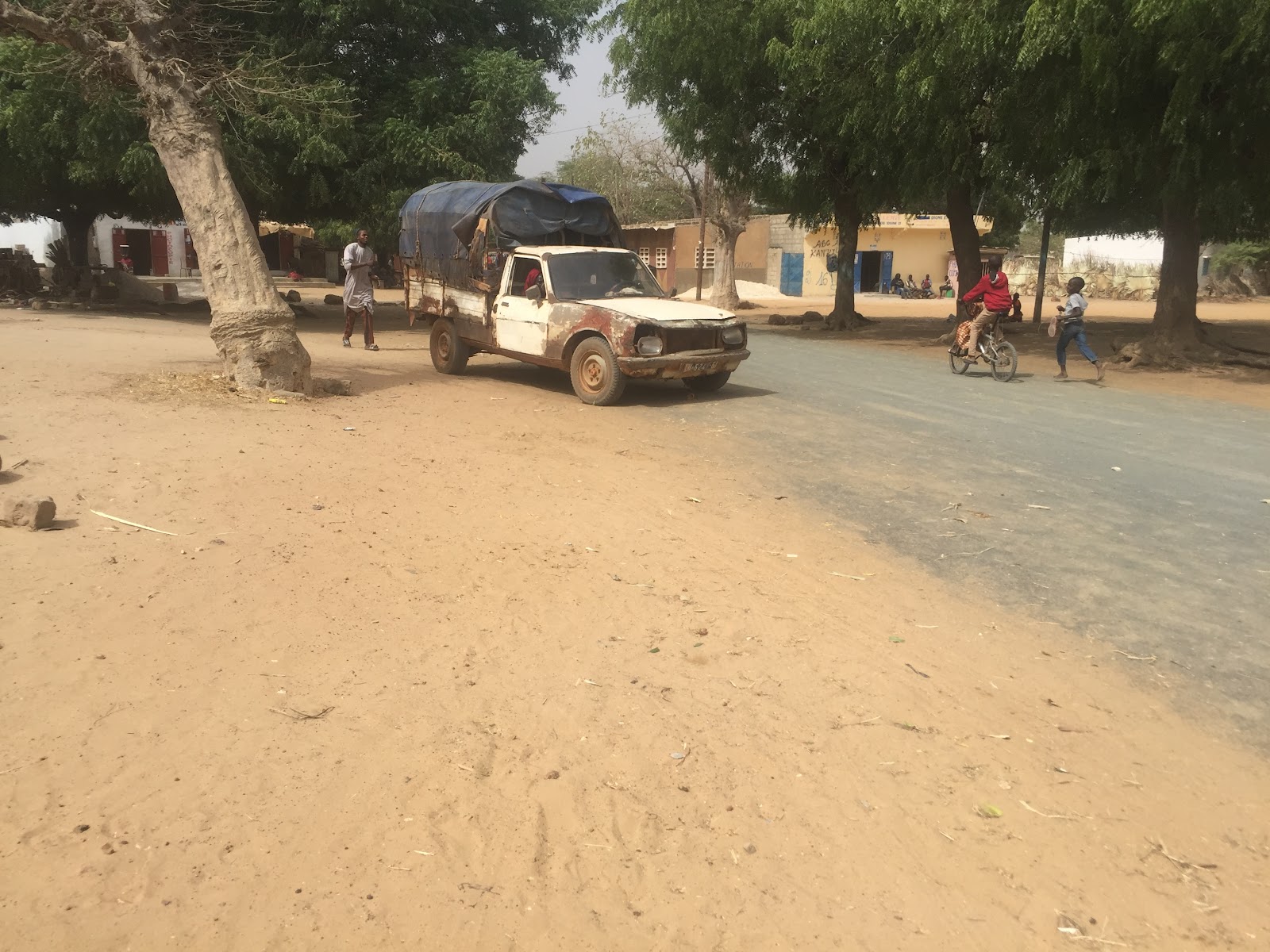 A smaller thing I’ve had to get used to is just how many animals roam free all over Senegal. Whether in Pambal or in Thies you can always find a herd of goats wandering around or, if you’re unlucky, a loose donkey. A huge form of transportation is horse/donkey carts so I’ve had my fair share of near-donkey-bite incidents. However, most of them are fairly calm and are used to passing people and loud noises always surrounding them. Two of the oddest animal encounters I’ve had in Senegal were both in Saint Louis. The first were the terrible little crabs that scuttled around the beach at night. If you stepped foot in the sand you better not be caught without a flashlight or I swear they probably would have eaten you. Speaking of eating, while going on a walk at night, Izzy, Isa, and I found at least 50 crabs eating a goat carcass. So that was lovely. Their small nearly transparent shells scuttle around in herds. I saw them climb up small walls by turning themselves vertically, not a pretty sight. The second odd encounter happened later that week. Before dinner, Isa, Izzy, and I had taken a walk on the beach. We were sitting watching the sunset, enjoying life, when it suddenly flashed before my eyes. Silently, at least 30 huge cows strolled along directly in front of us. We didn’t even notice they were there until they were maybe five feet from us. We sat still and I had a minor freak out about our impending death while they calmly walked past, no herder in sight. I guess they had also thought it was a nice night for a walk on the beach. However, the most terrifying animal experience I’ve had in Senegal is the rats. They are, no joke, the size of cats.

Speaking of cows, on Christmas Eve I walked outside to see quite a sight. Right in my front yard, was a slaughtered cow. This cow had been living at our house for about a month. They cut his throat, tipped him on his back and skinned him. I came out a while later to see it completely cut up, and my uncle walking away with 4 hoofed legs and a cow tail in his hands. The 8 or so men who’d been cutting the cow up, then divided up the meat and went on their way, my family ate their portion that night. 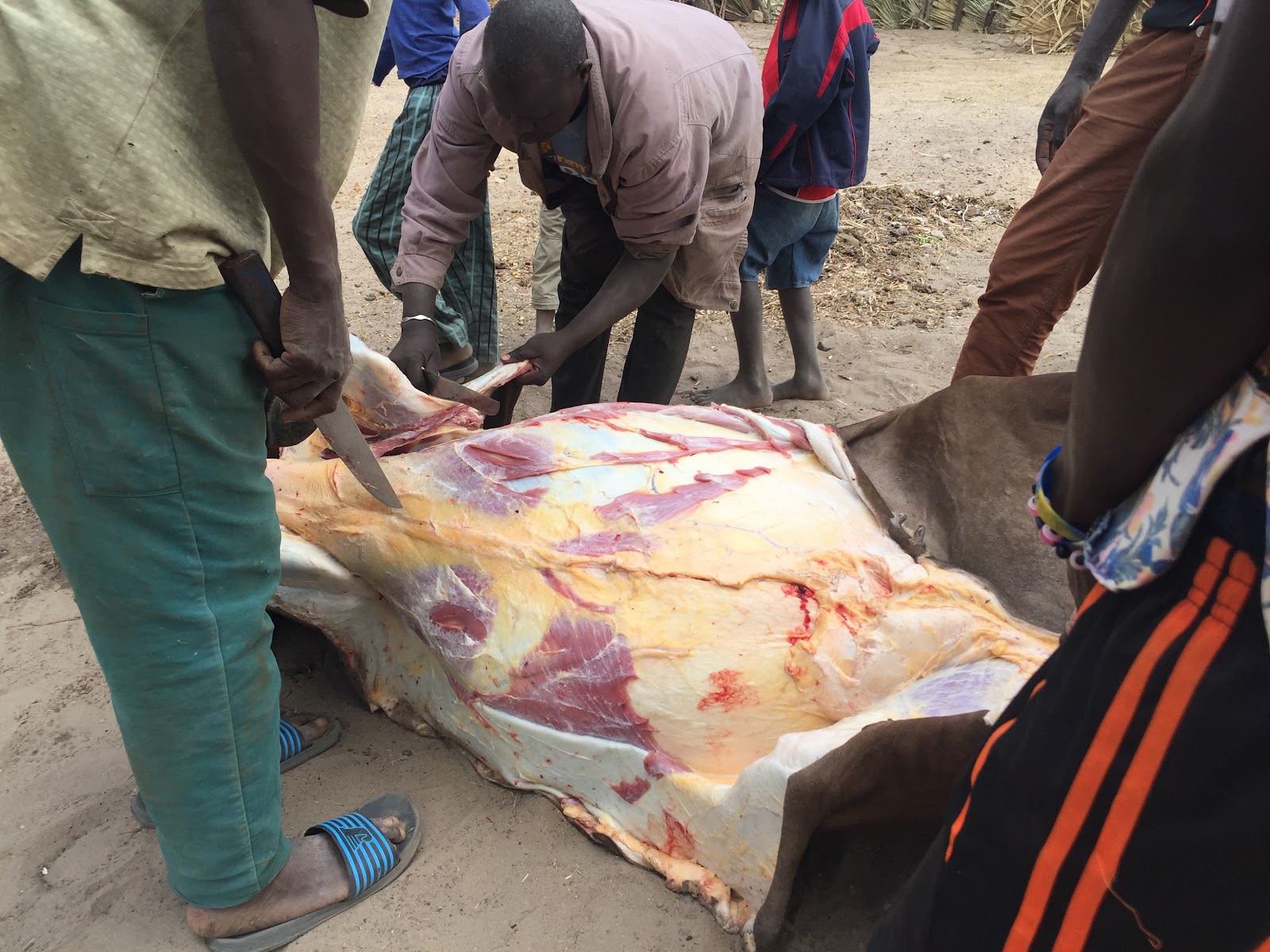 The language alone here has its own spunk. There are verbs that literally mean to shoo away chickens- attcha kees, the verb to improve is ka googaluk, the verb to brush your teeth with a stick (which actually makes your teeth feel insanely clean and, I believe, is the secret to peoples impossibly white teeth here) is ka feechook, to pick up MANY things is ka ballow, to slit the throat of a chicken is ka hoss, to not have respect for someone is ka yaap, and to have a cold is ka gulfar. 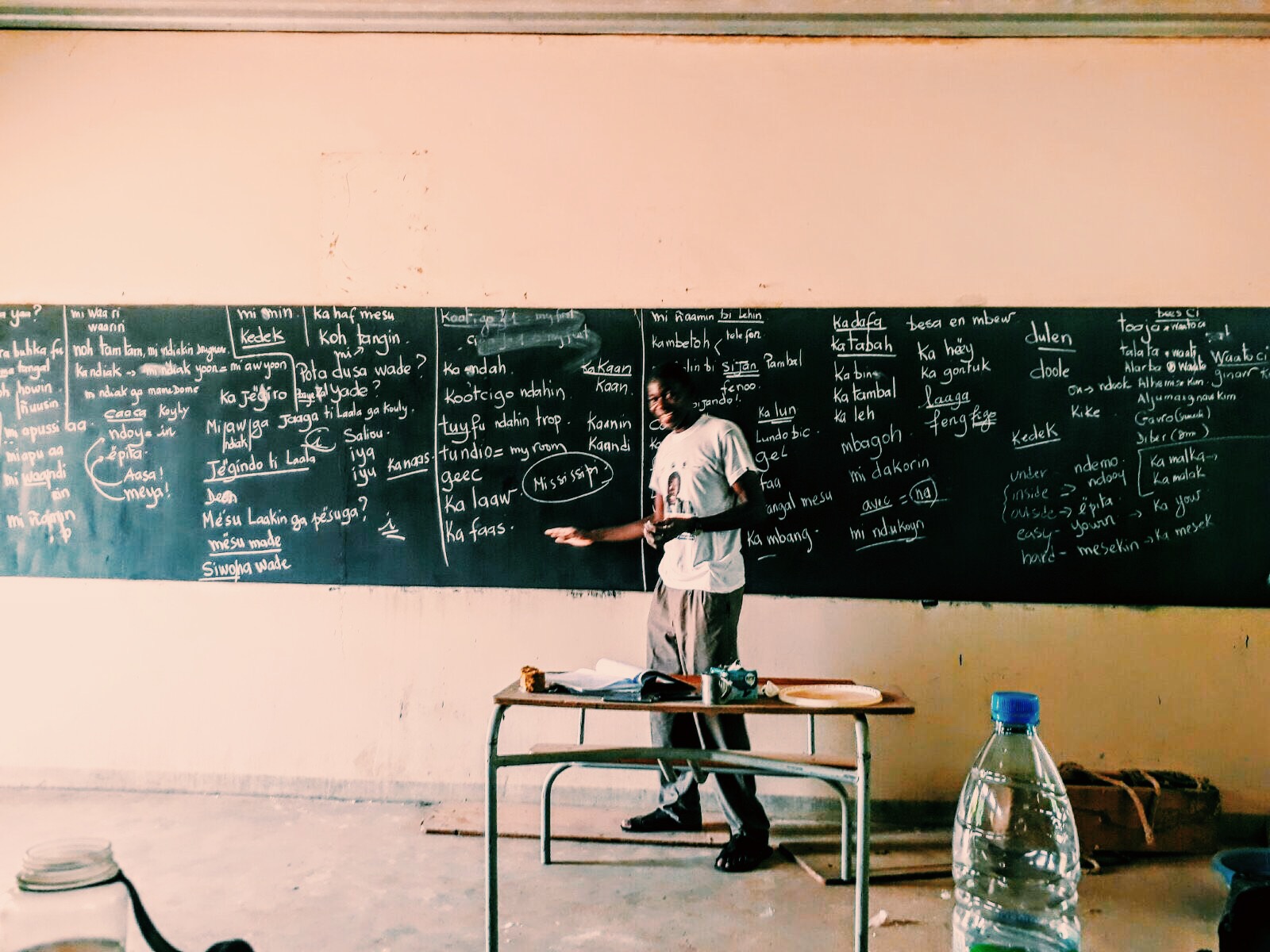 I had many other small experiences that have caused me to do a double take on what the heck just happened. For one, I’ve learned that the phrase “like a chicken with it’s head cut off” is most definitely real. I’ve seen at least 10 chickens getting their heads cut off. I’ve had lizards crawl down my mosquito net during the night, I’ve nearly been hit by a huge bus going to Touba, I’ve become friends with a french nun living in a neighboring village for a year, I’ve learned how to wash my underwear in the shower, and I’ve learned how to fake that I can speak Wolof so I don’t get ripped off at the market. Sometimes I think about what my expectations once were before I came to Senegal. I couldn’t have been more wrong, and thank God! I love the bizarreness of this country! I love thinking to myself, “Huh, didn’t think I’d ever see that.” Every quirk, every imperfection, every probably super dangerous car ride makes Senegal special and weird and wonderful and my new home.

I was worried with this blog that I may be involving myself in the “danger of a single story”. That my anecdotes may cause people to view Senegal in a negative light. So I want to note that that is not the purpose of this blog. Senegal is an amazing place and for every weird experience I have, there are days where I go about my business and absolutely nothing happens. But, regardless, I wanted to share some of the weirdness that will make my months here so rememberable.

Wyatt is passionate about international women's reproductive health. She is involved in women's health advocacy, refugee outreach, and social justice issues in her community. Her goals for the year are to learn how to effectively make positive change in our globalized world in regards to her passion. She also wants to fully engage in the Senegalese culture and learn how she can better herself by incorporating their culture in her life when she returns home. Her favorite quote is "the future is no place to place your better days" from Dave Matthews Band. (She's been to 22 of their concerts so you could say she's a fan.)