Throughout my life, death has always been taboo. I think much of this
feeling comes from being raised in the Western world, where we as a society often hide the fact of dying. We don’t really talk about death, we do
everything we can to slow the inevitable process down, and once it does
happen, we embalm our loved ones’ corpses to make them look alive– so you could say we don’t like to look death in the face– literally.

This facet of my culture is opposite to that of Ecuador, which I
experienced fully for the first time on November 2nd, known as Día de
losDifuntos or Day of the Souls. My host family took me to the indigenous cemetery in the neighboring city of Otavalo, where members of their bloodline had been buried. They had told me this day in the cemetery would be busy, but I didn’t expect that what seemed like the entire population of the Imbabura Province would have the same idea. The cemetery was absolutely packed– by far the biggest crowd of people I had seen come together here– and I’d been to an Ecuadorian concert before.

My experiences with cemeteries up to point had been relatively solitary,
which was in complete contrast to Día de los Difuntos. The crowds caused us to have to walk on graves to get to the headstone we were searching for,
which immediately set off alarm bells in my head. Walking on someone’s
grave felt intensely disrespectful, and I imagine most people would agree
with my discomfort. Yet, we pushed through the swarms of people until
finally reaching the above-ground tomb of my host dad’s deceased brother.
There, we met up with much of the extended family who were already splayed out with picnic blankets and several baskets of food on top of the tomb. I must have done a double-take at the thought: “we were about to eat lunch using a tomb for a table?” And of course, yes we were. And we did.

And so did everyone else at the cemetery that day. My host family later
explained to me that one of the best ways to show respect to the dead is to
have a meal with them, with their… buried corpse. It was a feast in the
honor of that person, shared by those who loved them. These family feasts
are also shared between the grave-goers, as we all swapped bowls of rice
for beans for fruit for guaguapan* and for every food group imaginable.

Between this food exchange, the bustling public, and flowers crowding the
graves, one of the feelings that characterized this day for me was a strong
sense of gratitude. I still feel incredibly grateful to have been privy to
a very sacred day in such a sacred place that is usually reserved
exclusively for indigenous people. In fact, I certainly stood out as one of
the three white people to be seen at the cemetery, (and the other two were
Global Citizen Year Fellows as well.)

This sense of a “VIP Pass,” was thrilling, but also complicated my feelings
as I was distinctly aware of being a foreigner and a guest. I was not at
the cemetery to grieve anyone, but to spend time with my host family and
observe a distinctive cultural event. Throughout the experience, I was
taking photos of everything I could because this opportunity truly felt
once-in-a-lifetime to me. However, I must admit that at times I began to
overstep my role and document people’s’ grief, even when I had no right as
an outsider to photograph their pain. Yet, I do love some of the photos
from this day and have posted the best and most ethical ones below. The
inspiration I felt from Día de los Difuntos has stayed with me, and I went
on to create my most recent drawing from photos and emotions of this day.
The drawing shows my host mom’s mom, who I first photographed in front of her husband’s grave. I hope that both the grief and beauty of the day is
apparent in this work, and reflects that my trip to the cemetery was one of
the most impactful experiences I’ve had throughout my time in Ecuador. 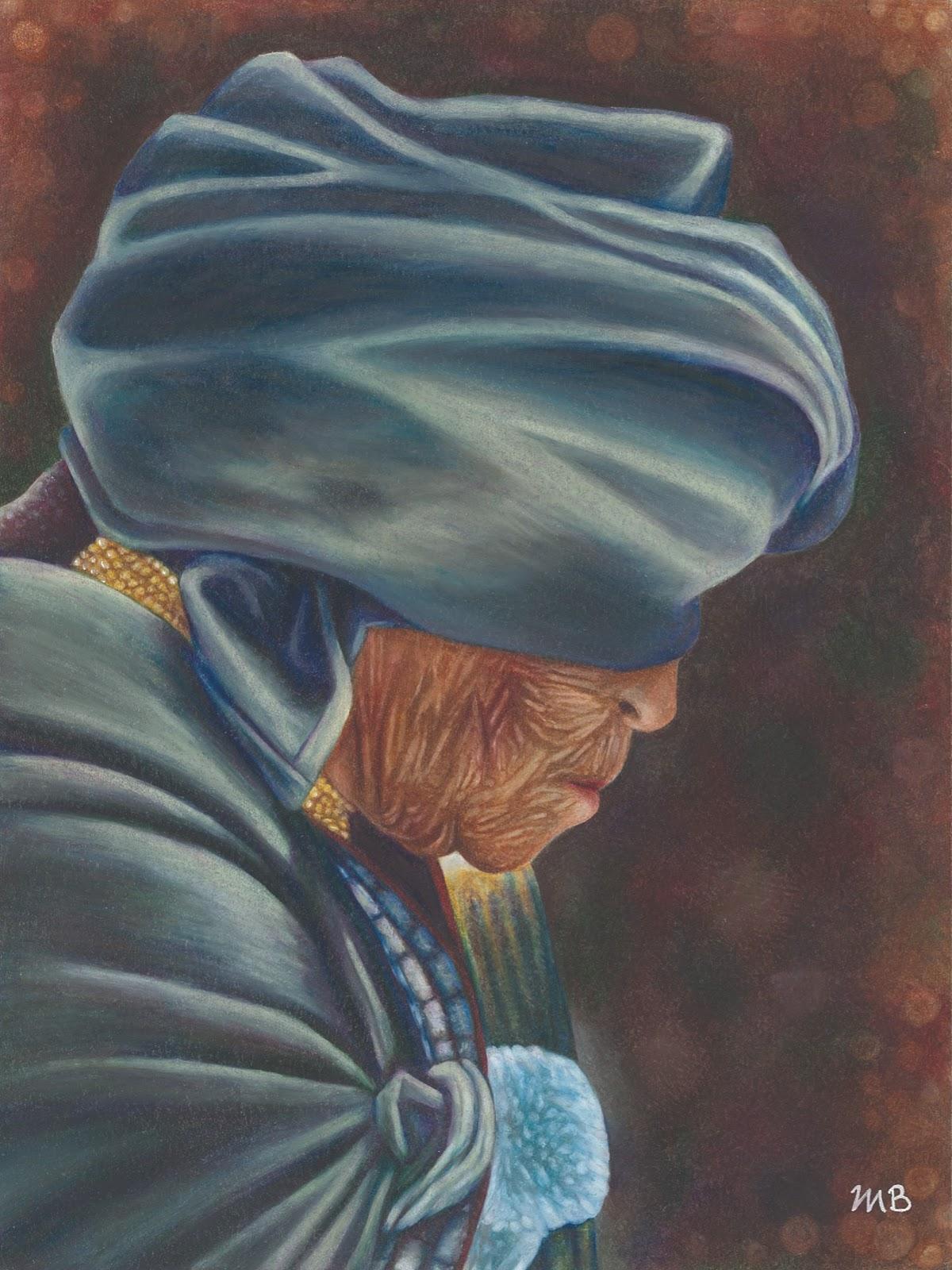 The drawing, titled “A Day to Remember” 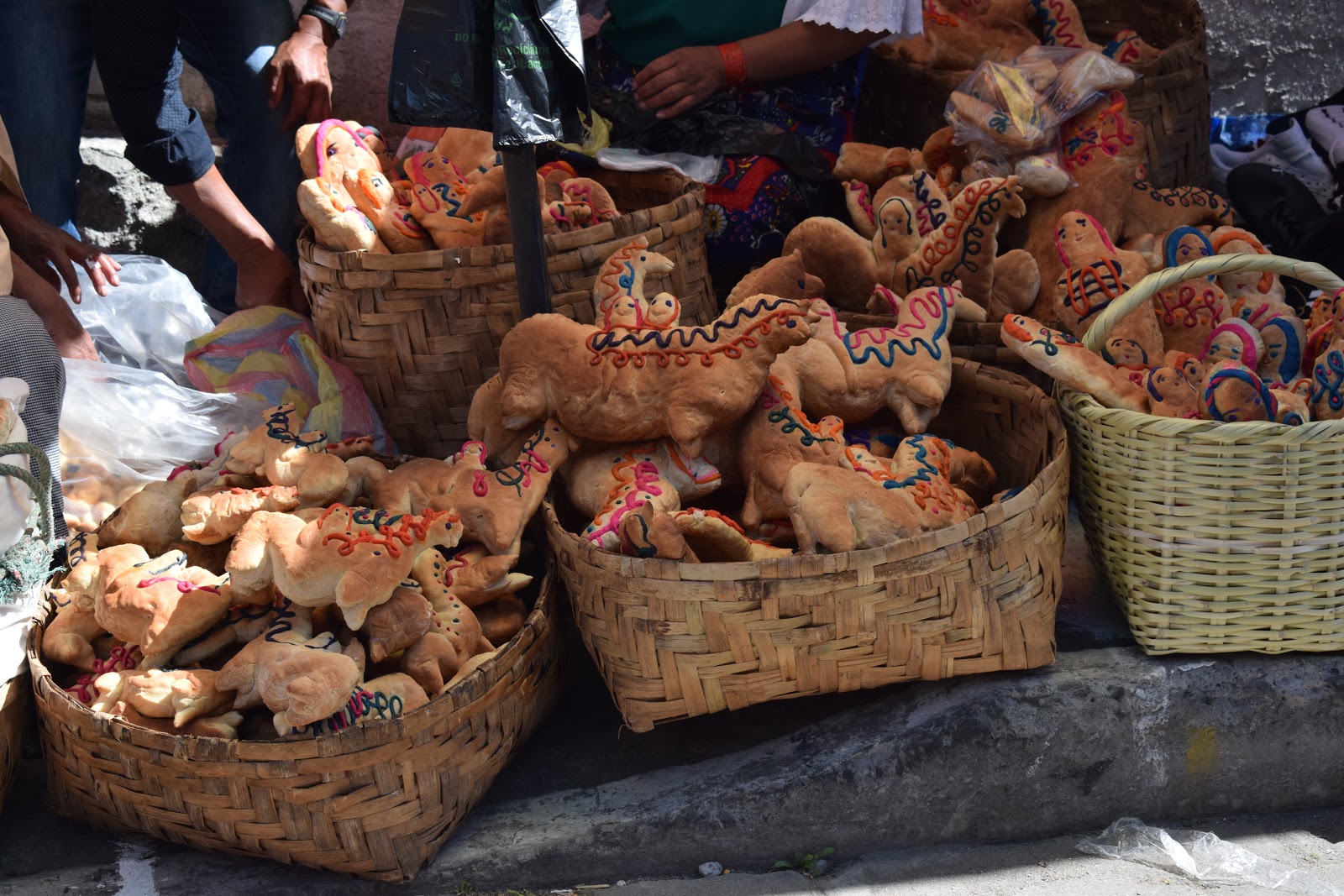 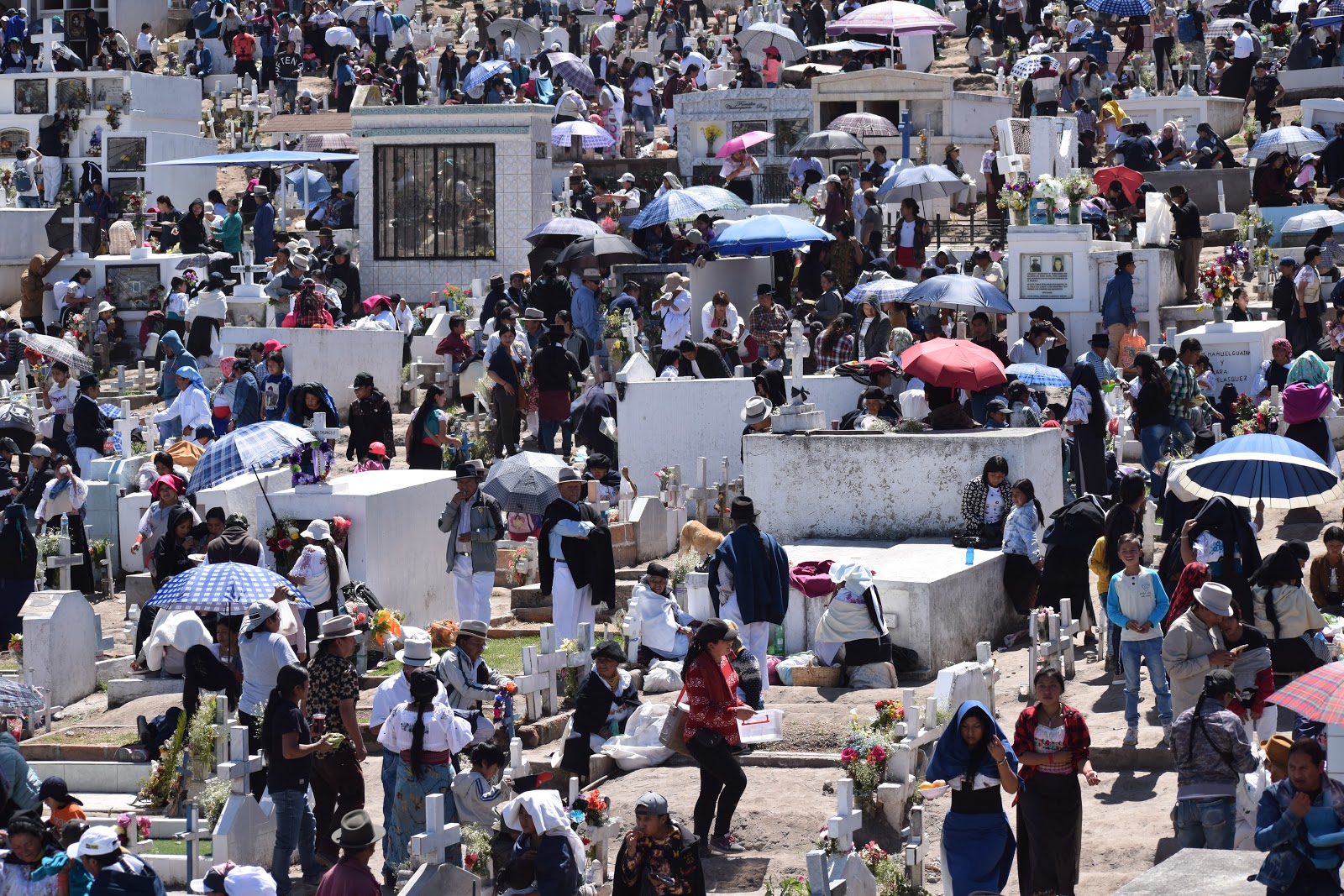 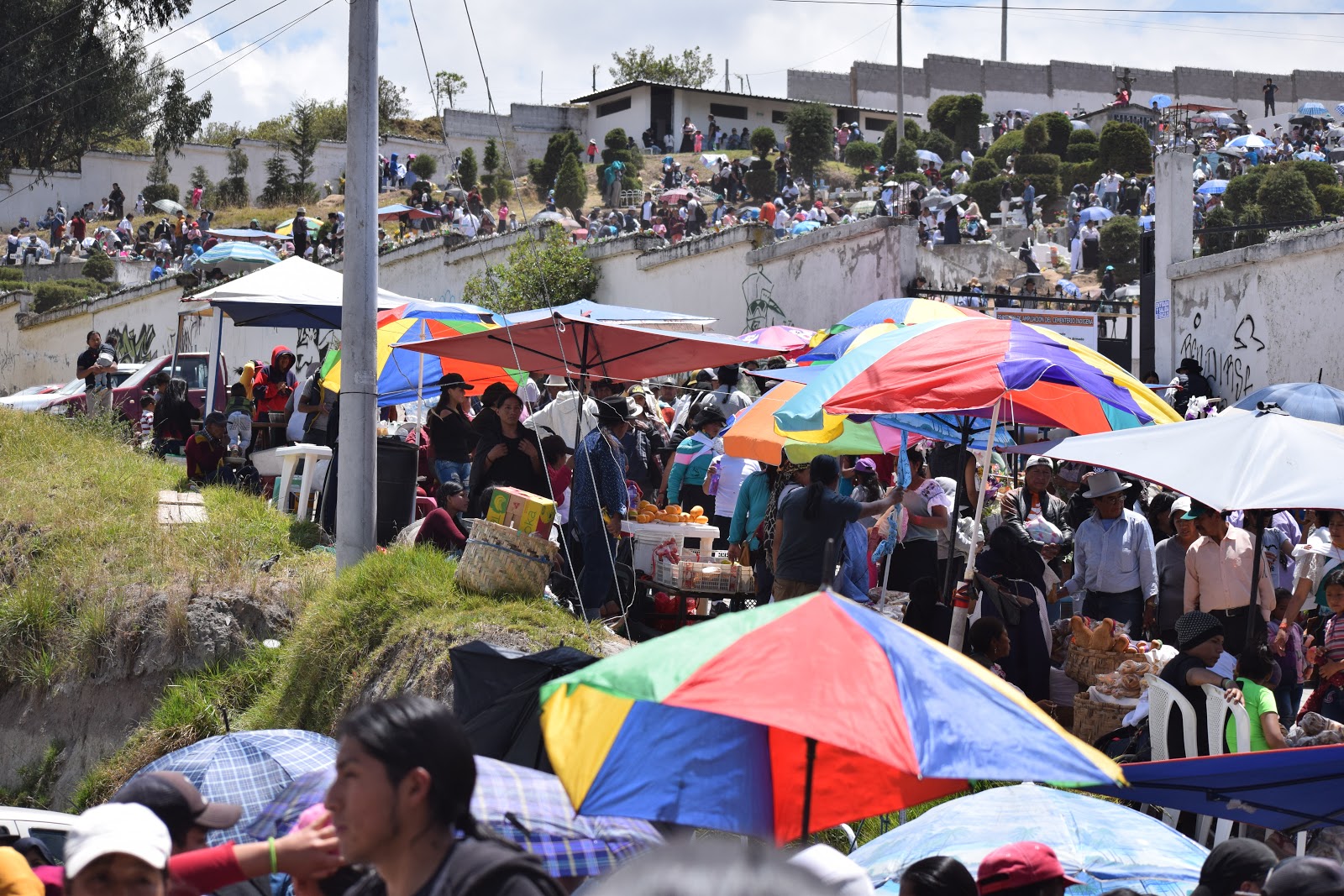 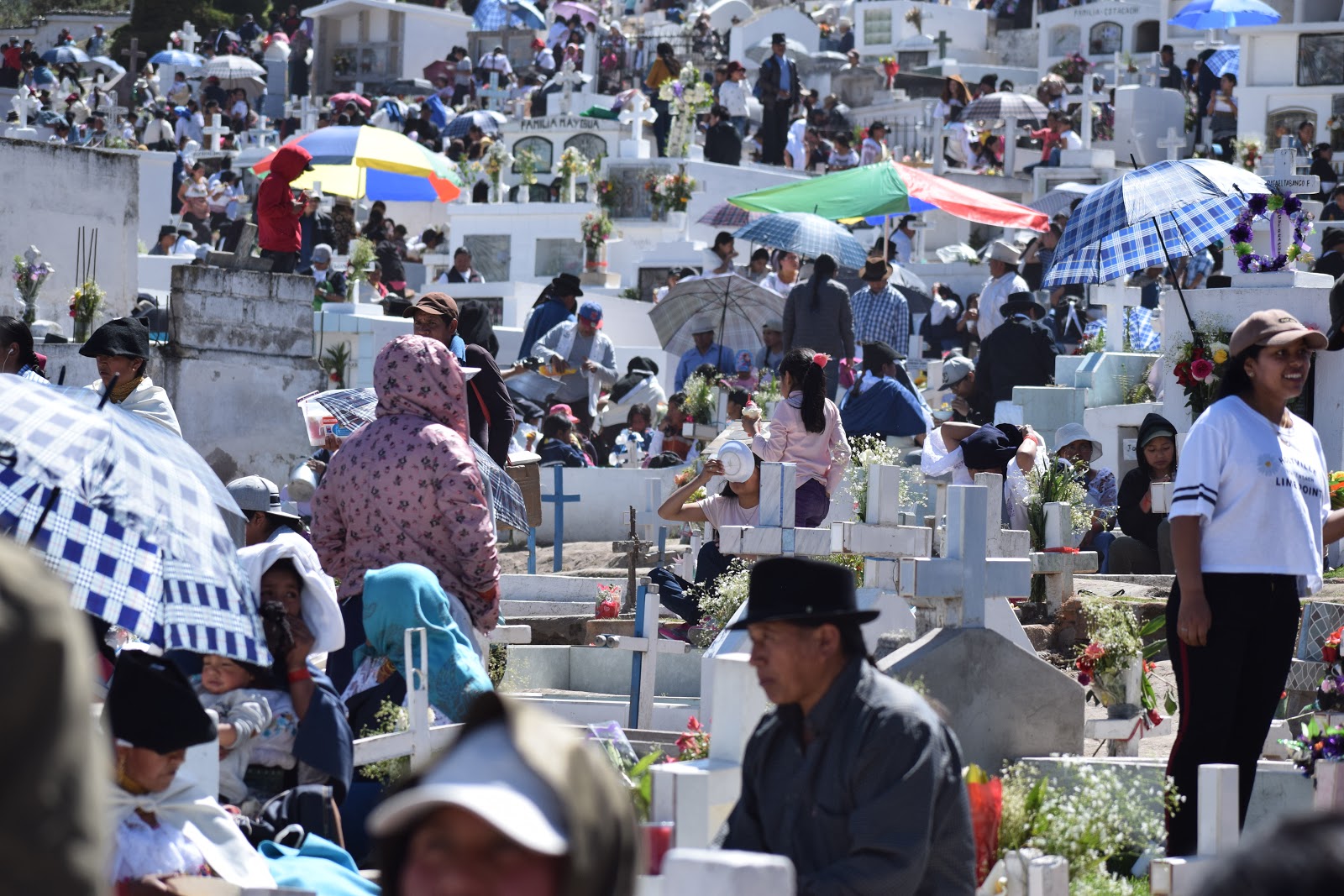 Crowds of the cemetery. 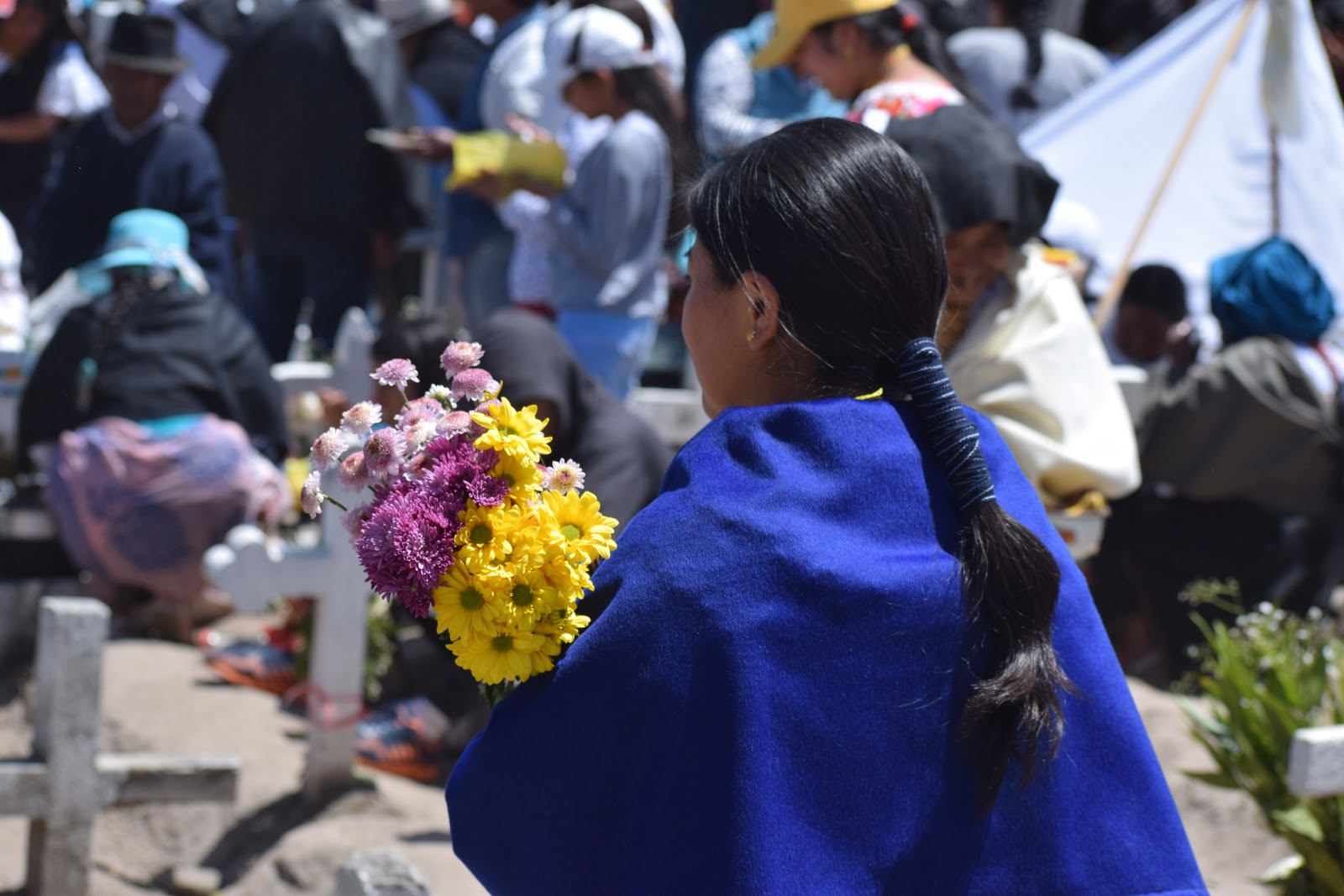 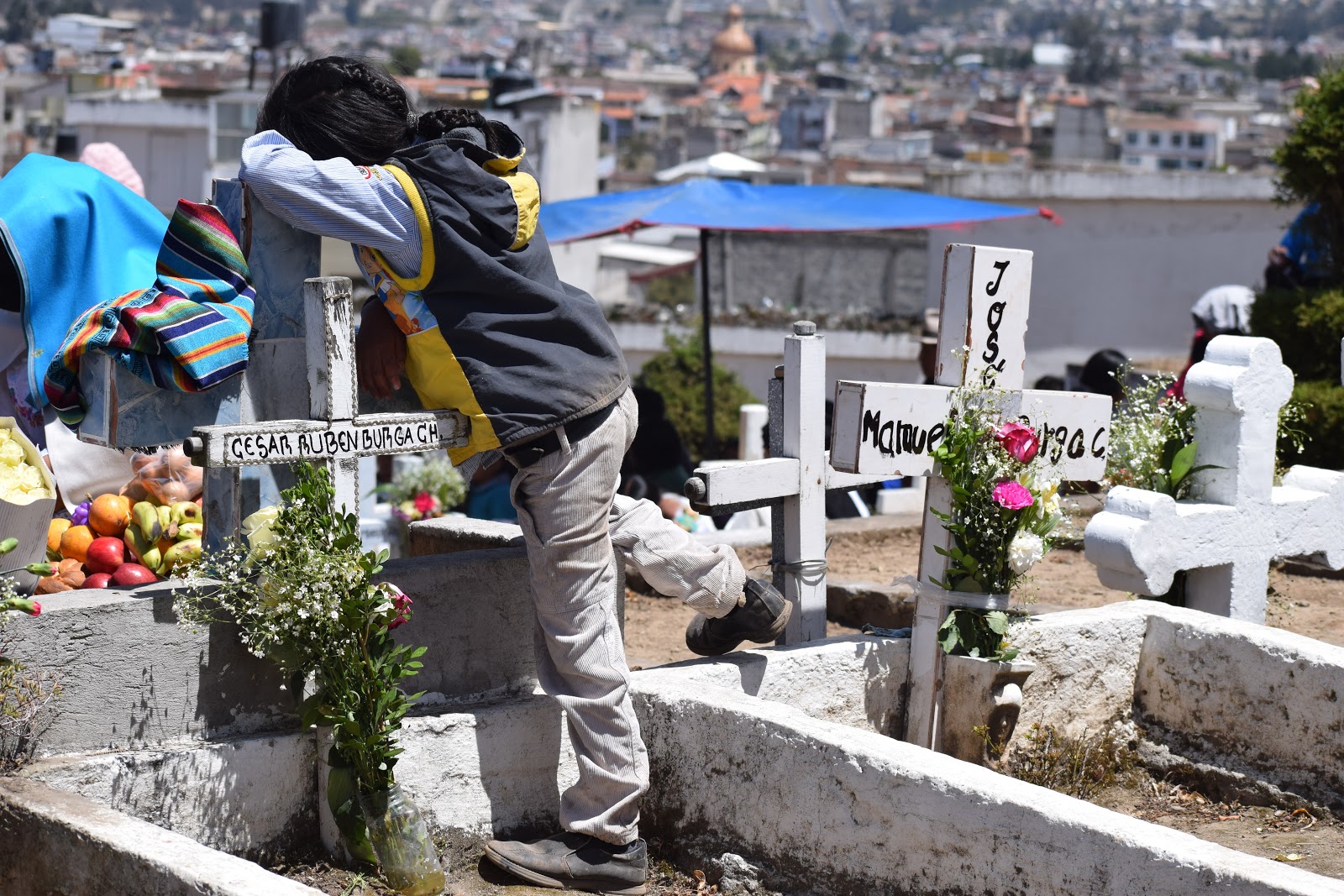 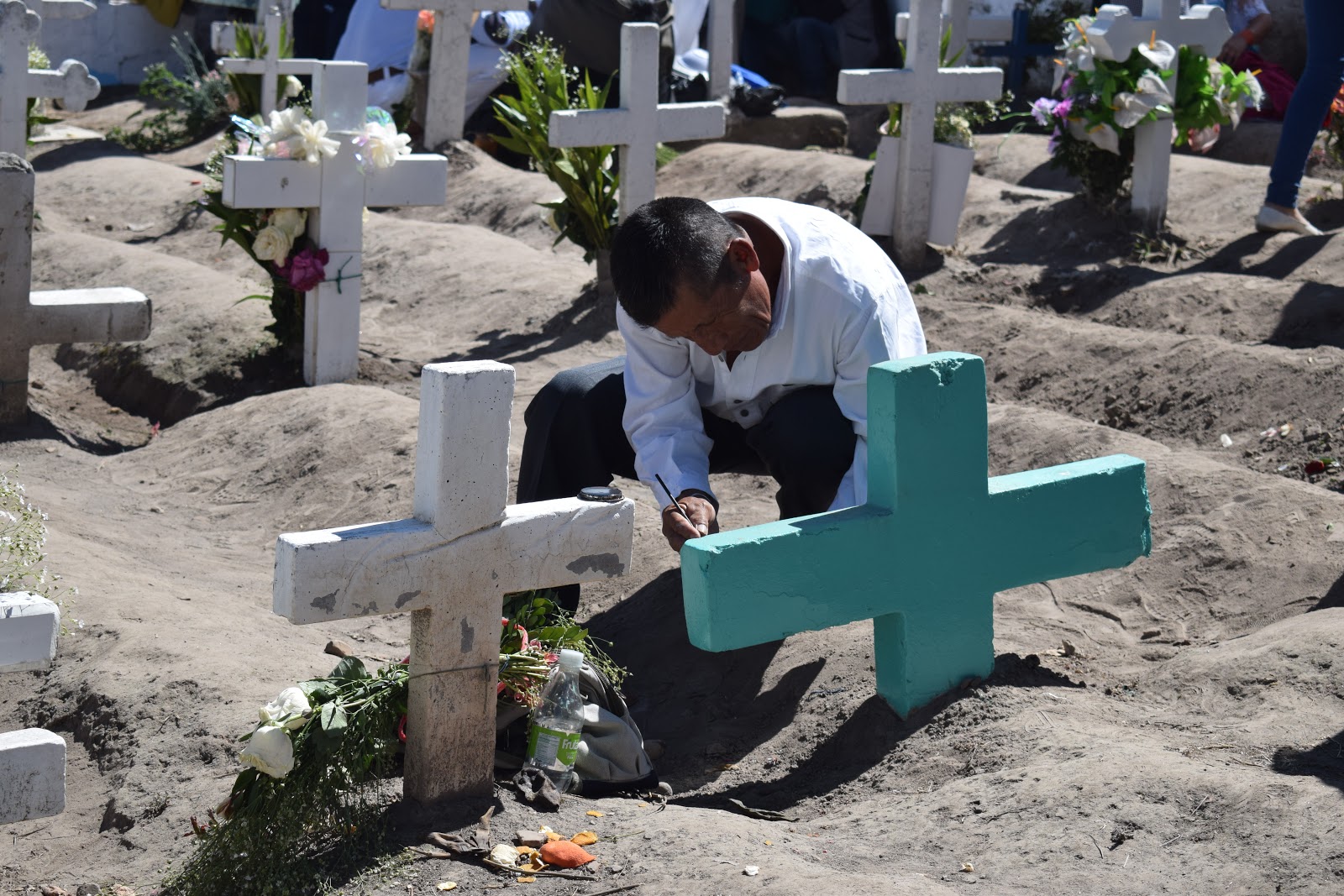 New paint job on a headstone. 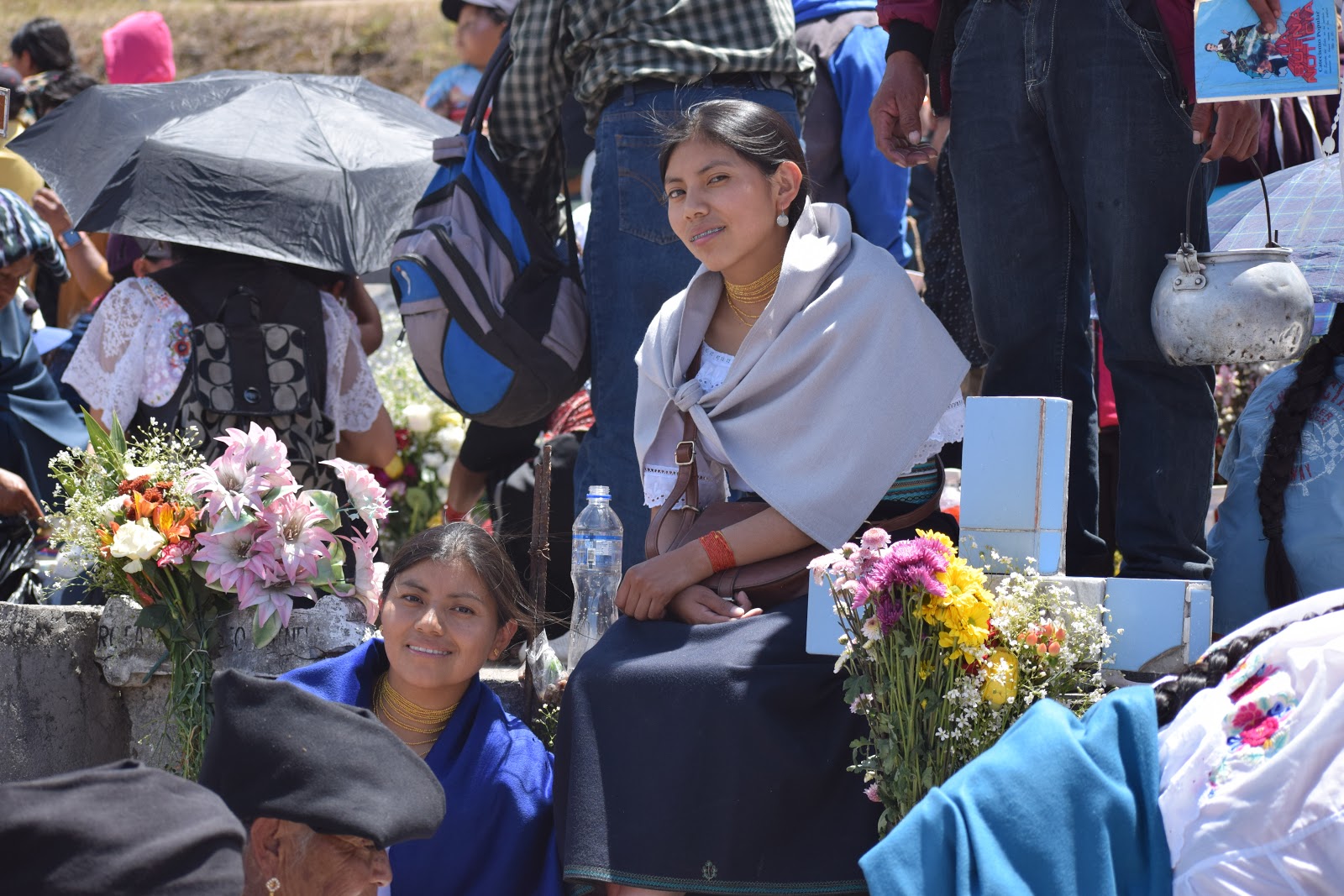 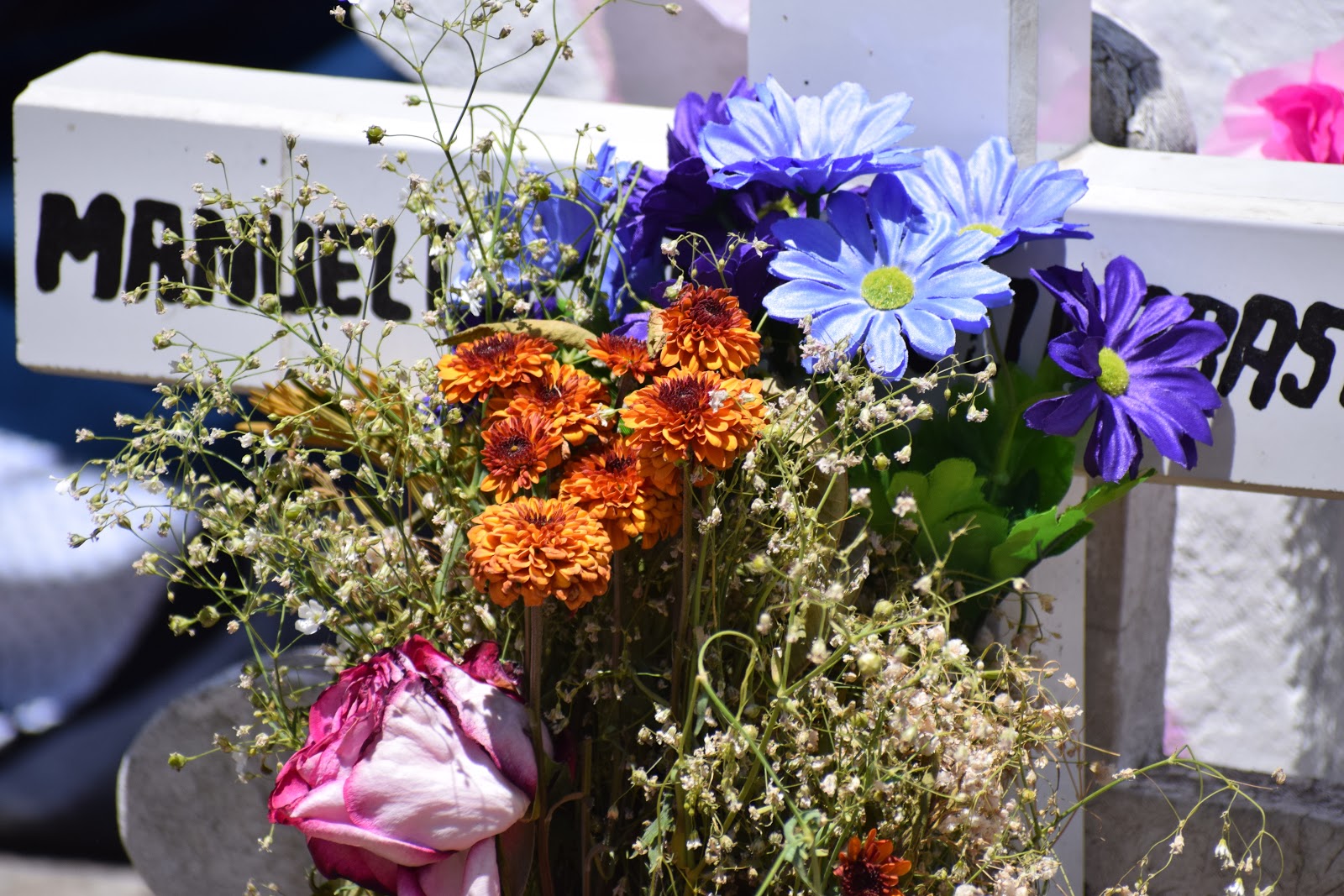 One of the thousands of flower arrangements. 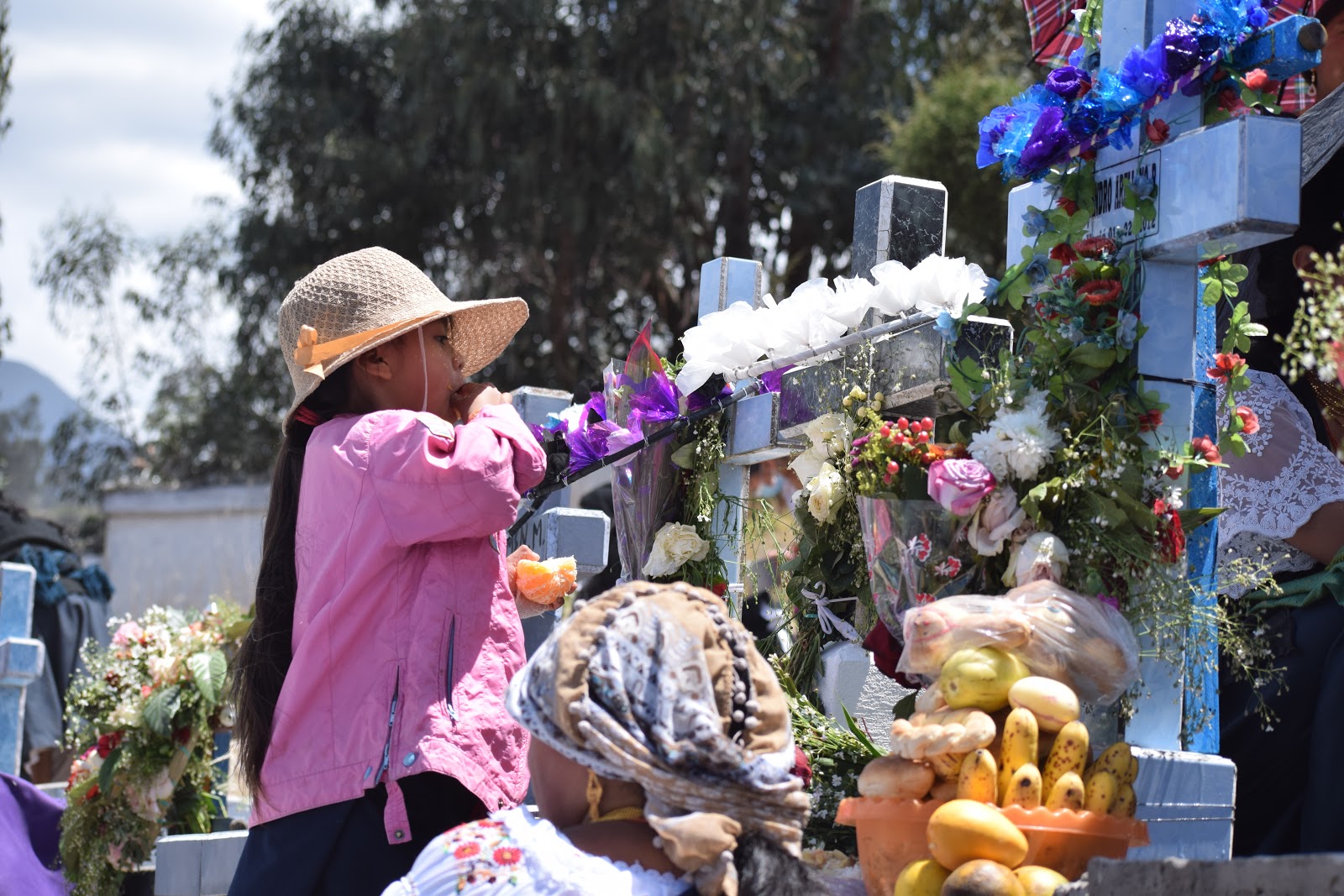 Likely the product of a friendly food exchange.