Before coming to Ecuador, many people told me not to have high expectations. They told me I would be disappointed if I thought my Global Citizen Year was going to be all rainbows and butterflies; therefore, I tried to set low expectations before coming here. However, once we got to the country launch and I saw the picture of the huge metal statue that’s in front of the museum, I got very excited. Part of the apprenticeship description was helping with a literature workshop with kids ages eight to 12 and I could already picture myself reading with the kids and asking comprehension questions about the lectures. I just couldn’t help myself. Turns out, I had already set expectations I didn’t even know I was setting.
My first day at my apprenticeship was amazing. I got a tour of the museum, participated in a poetry workshop, and ate fritada for lunch with my supervisor and the poetry workshop leader. I got to know my supervisor and it got me so pumped for my time at the Fábrica. However, the next day, the rose-colored glasses were slapped off my face. Day after day, I found my apprenticeship to be so incredibly boring. I sat for eight hours (later five after a schedule change) either watching Netflix or scrolling through Instagram as the other volunteers napped beside me. I asked my supervisor if there was anything I could do and she answered no.
Although having a lot of free time was great, especially since I got to catch up on my shows, it’s not why I came here. I didn’t come all the way to Ecuador to sit on my butt all day and do nothing. I also found out that due to the lack of government funding, the museum was no longer doing reading and literature workshops. I was having a hard time figuring out what I was doing, especially concerning things like community engagement and my role in it. How was I helping my community and learning about it by sitting at a table in the middle of the museum? It was frustrating because what everyone had told me was right: I had set expectations and now I was disappointed.
There was also another thing I was worried about for my apprenticeship: the Spanish tour. I knew I could memorize and give the tour in English but I was unsure about doing it in Spanish. The other volunteers had one day to learn the tour, but it was hard for me. Fortunately, my first tour was to a woman from California who was living in Mexico and her business partner; therefore, I gave the tour in English and Spanish. As I kept giving tours, I got more comfortable with it. Now, I can say things like “Esta fotografía muestra la bendición de la primera piedra de la Fábrica Imbabura que ocurrió el 6 de Mayo, 1924.” I’m so used to giving Spanish tours that when I have to do it in English, I mess up a lot more. I find myself having to translate things from Spanish to English instead of the usual English to Spanish. I never thought I’d come to the point where I’m more comfortable saying things in Spanish than in English yet here I am.
The thing I was most worried about has now become my strength working at the museum. By going out of my comfort zone and giving tours in Spanish, not only have I improved my Spanish, but I’ve come to figure out the importance of my work for my community.
I’ve realized that I’m not just a tour guide, I’m sort of like a history teacher. I tell the story of this factory: what the machines were for, how the factory functioned, how the workers were treated, and what happened in the halls of this factory. I tell the story of the antique machinery and the stories of what the lives of many families in Atuntaqui were like.
I also learn a lot about the community I work in and the people who live there. I’ve met people who’ve been affected personally by the factory. Their grandfather or father or friend or neighbor worked there. This one man told me that it’s important for me to tell the story. To tell the story of how the bad treatment of the workers led to the murder and dragging of the Spanish administrator down the street of General Enriques to Atuntaqui. To tell the story so that history is not forgotten. This ex-factory that I’m working in has had a huge impact on the community. Because of this factory, Atunatqui is now a textile center. Because of this factory, families could make a living. Because of this factory, many people lost their family members due to the terrible working conditions.
I’ve come to hear many stories of the people of this community. How one lady’s family was ostracized by her neighborhood and labeled as “murderers” after the murder of the administrator because her dad had worked in the factory. I’ve had many people come and point out people they know in the pictures. “That’s my friend” they’ll say or “that’s the man who cut my hair!” Their story is not forgotten and I am part of telling the history.
So, although there are times when I’m just sitting at the table for hours with nothing to do, (thankfully, I now have more work to do, such as video editing, managing the Facebook account, and working at the theater for cultural events), I know that my work at my apprenticeship is contributing to my community. 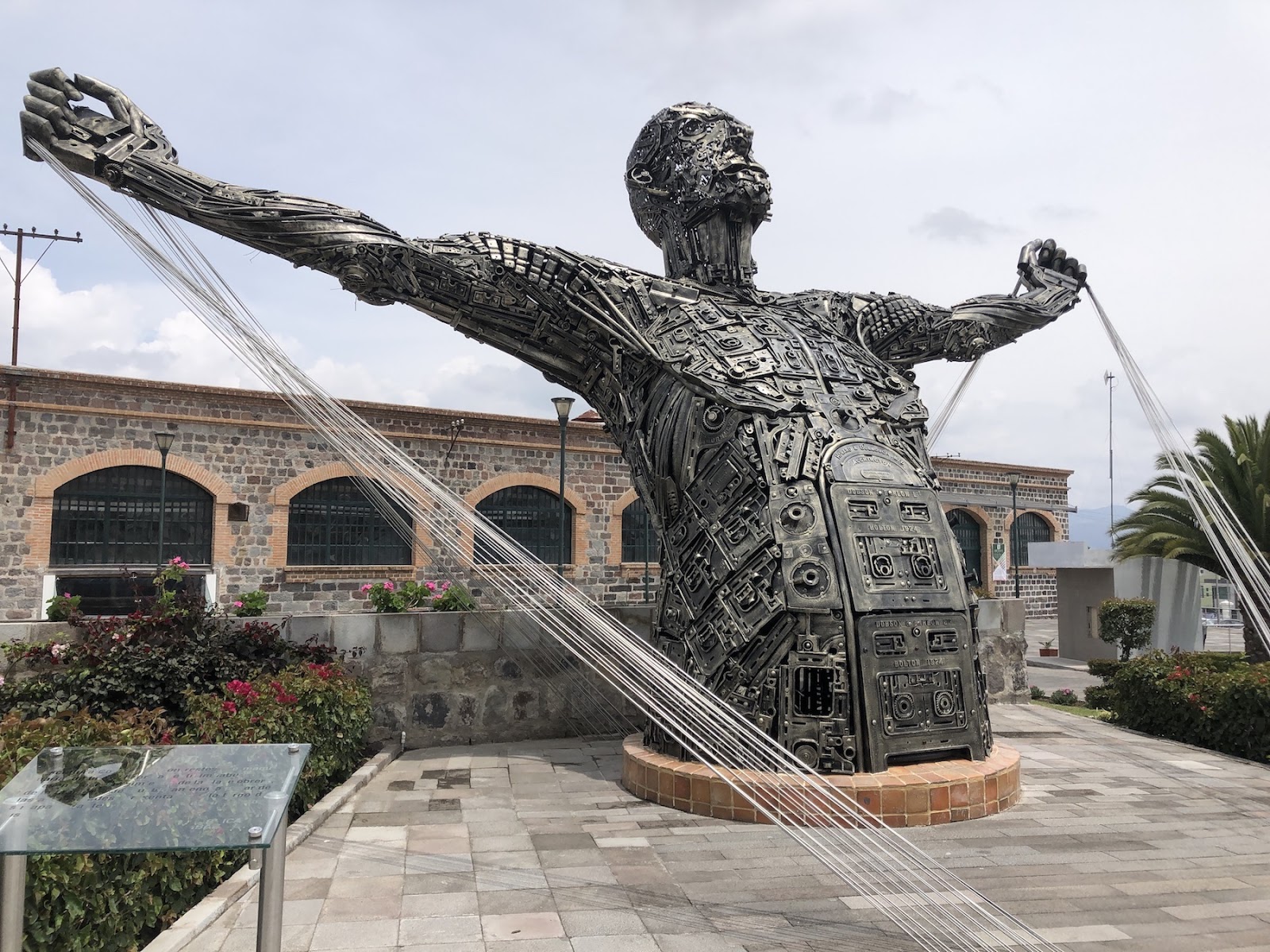 “El Renacer” (The Rebirth), a sculpture built with the remains of machinery from the former textile factory, represents the resurgence of the working class despite the difficulties presented throughout its history. This was the sculpture that excited me when I first saw the picture of my apprenticeship.

Angela is passionate about traveling, reading, and trying new foods. During high school she was involved in Key Club, played field hockey and lacrosse, and was an editor for the newspaper. Her goals for the year are to fully immerse herself in the Ecuadorian culture, to improve her Spanish, and to develop meaningful relationships with her community and fellow fellows. Angela will attend the University of North Carolina at Chapel Hill once she returns from her Global Citizen Year. Her favorite quote is, “Broad, wholesome, charitable views of men and things cannot be acquired by vegetating in one little corner of the earth all one's lifetime” by Mark Twain.