A Blog for Sarah

This past year I made a lot of new friends and I can’t express my gratitude for them enough.  Although they’re spread across the globe and I won’t be able to see them nearly as often as I would like to, they’re always on my mind and they taught me more than I could have ever asked for.

One of these friends was particularly special to me as we shared a host community.  Sarah and I spent much of our time together in Garopaba and I was constantly grateful for her friendship.  Although words can’t say how happy I am to have met this spunky Brit, I guess I’ll try it.  For those of you reading, I also felt like this was a good way to explain some stories from this year as most of these stories happened with Sarah by my side.  If you’re feeling a little lost reading this, I’ll have a little guide for you to try and decipher, and it should also teach you some things about Brazilian culture too.

So Sarah, here is a mini-tribute to you, a poem.

The streets of Garopaba, the town which they called home.

One Americana, the other proudly Geordie

For a while there was “Eshtevie”, but he sadly had to go

Sarah and I would cope, pizza rodizio and our woes.

Asked to help with English, we tried to teach some classes,

Only to be stood up, those bus rides a pain in our..  schedules…

Not everything went like this, we sometimes found success

But an engagement party in our havaianas… “I should have worn a dress”.

Sarita and ABC, they eventually made friends

Her name was Keissiane, but that’s not where it ends

They also met a couple, although they were rather old

The girls admired the man’s paintings, he really had them sold

It overlooked the beach, where lot’s of fish were caught

For some unknown and odd reason, everybody thought

That Abe “didn’t get it”, but Sarah understood the lot

So Abe sometimes fumed, in the corner with dismay

While Sarah danced the samba, and all her fears away

Now Abe sometimes tried, to do that special dance

But she looked more like a penguin, that had put on pants

And Sarah learned quite quickly, to not use pao for pão

One time they went to Rio, Lapa they did explore

They way Abe looked at Sarah, would be the same nevermore

Now out of all these memories, one favorite that I have

Was pancake day for England, with my beloved chav. <3

A Guide of Sorts:

Gringas:  In Brazil, a Gringo is anyone who is not from Brazil.  In some places, a Gringo could signify someone who is white, but in Brazil this isn’t true.  All people from Latin American countries are also Gringos, just as Americans are considered Gringos.  For some people this is hard to understand, like my friend Eduardo.  Eduardo is Panamanian and identifies himself as black.  I remember the shock he had when he was first referred to as a Gringo because to him, it has a different meaning.  The word also doesn’t have a negative connotation in Brazil.  Just like any word, it could be used in a negative way, but the word itself isn’t inherently bad.  For example, a friend of ours would call Sarah and I Gringas but it was somewhat a term of endearment.  If you’re a male, you’re a gringo, if you’re a girl, you’re a gringa.

The purple backpacks:  This is pretty self explanatory, but Sarah and I both had dark purple backpacks that we brought with us pretty much everywhere.  Sarah’s has some meaning to her because it’s traveled many places with her and mine now does as well. 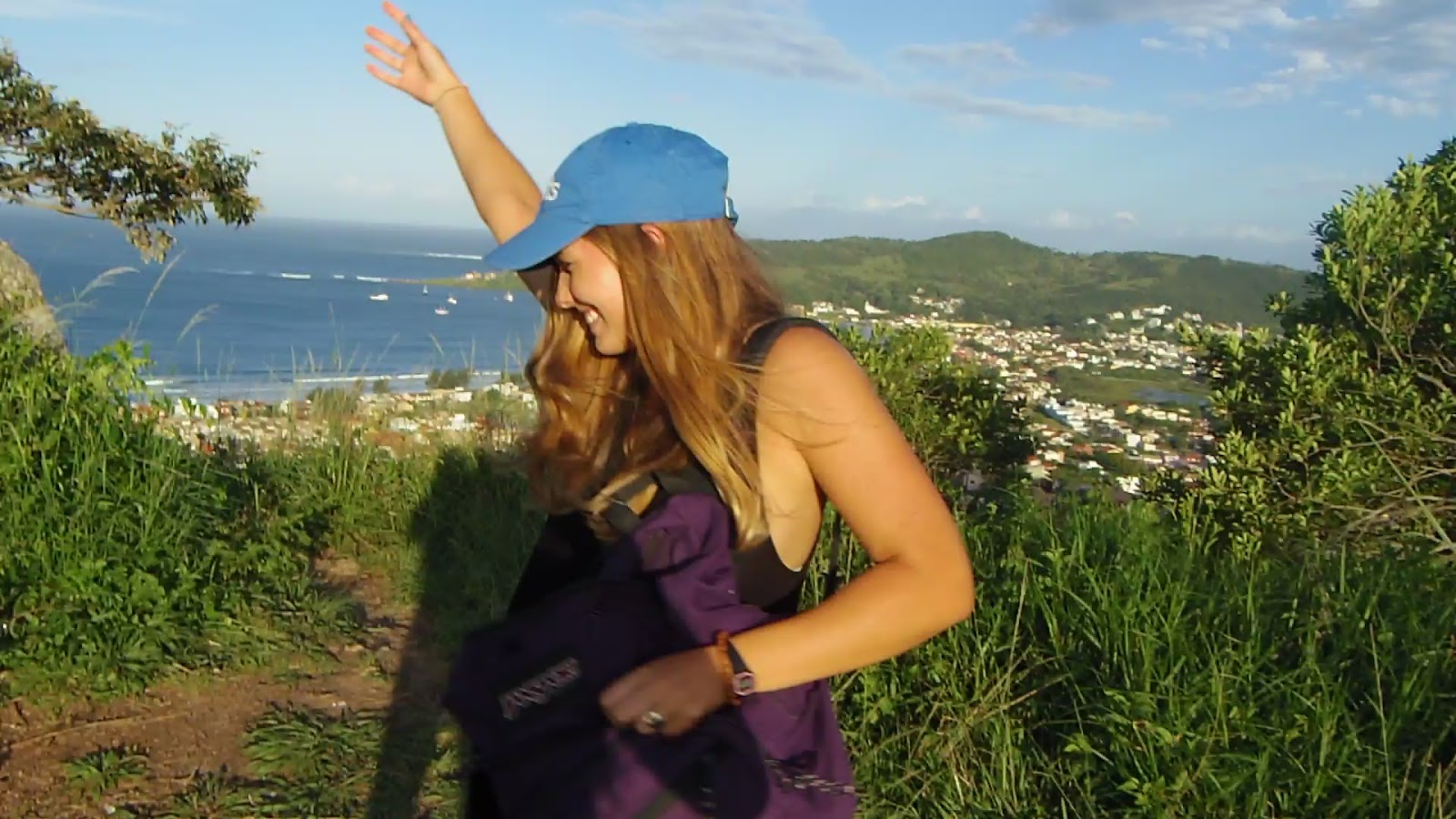 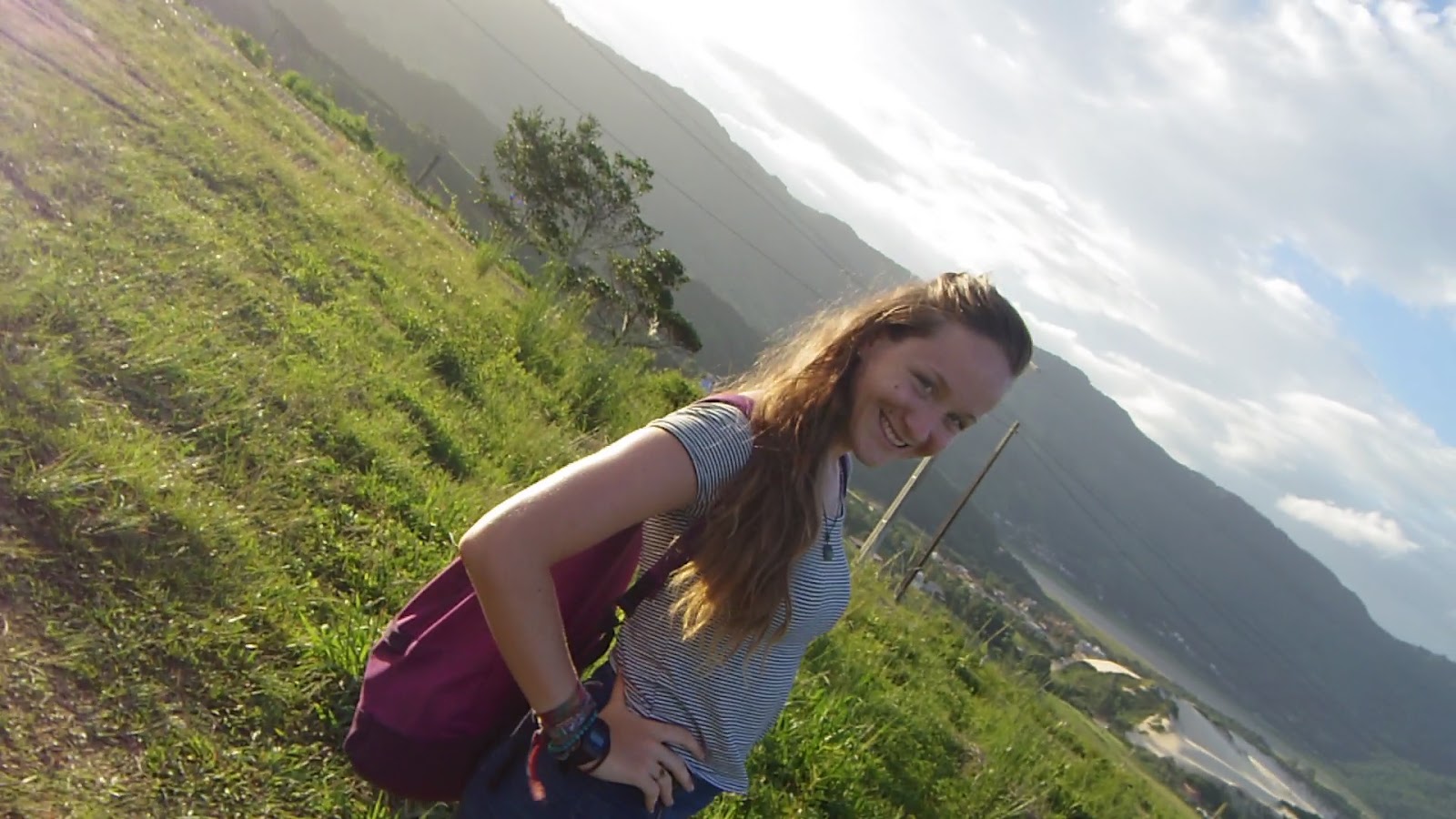 Geordie:  For those of you who don’t know, like I didn’t, a Geordie is someone from Northern England, the Tyneside area.  Which Sarah proudly was.  If you’ve ever watched Geordie shore… perhaps you know what I’m talking about.  Of  what I’ve learned from Sarah, Geordies have very specific characteristics and slangs and I was fortunate enough to experience this in southern Brazil.  Who would have thought I’d learn so much about England on my bridge year to Brazil.

Loirinha:  The word “Loiro” means blond.  The addition of “inho” and “inha” are diminutive in Brazilian Portuguese.  This can be used to mean that something is smaller, or cute, it can be endearing, or it can also be used to degrade something.  It all depends on the context but I swear that the Brazilians I met just loved making everything sound cute.  For example, bonito means pretty or handsome, but bonitinho means cute.  Sarah and I were often referred to as the Loirinhas.  Also, just so everyone knows, Brazil has plenty of blonde people.  Someone told me that I should dye my hair brown before I went to Brazil because I would be the only blonde person there, which was evidently false and incredibly misinformed.  It is true that the south has a larger proportion of lighter skinned and fair haired people than the north but the assumption that all Brazilians are people of color and of darker hair color is incorrect.  Also, in this vein of misinformation, I cannot repeat this enough, but THE LANGUAGE OF BRAZIL IS PORTUGUESE NOT SPANISH!!!! I was asked so many times by people back home “So how’s your Spanish going?” to which I kind of sighed and shook my head.  None of these people had bad intentions but I just wished we payed more attention, especially considering how large Brazil is and considering the fact the more people speak Portuguese than they do French, or German which are taught pretty regularly in American schools whereas Portuguese isn’t.

Gaucho:  The southernmost state of Brazil is Rio Grando do Sul, and I lived in the state above it.  Brazil is absolutely huge and I think that some people forget that.  Had I lived in the north of Brazil my experience would have been entirely different because Brazil is incredibly diverse.  Many of the traditions that were shared with me were southern traditions as many of the people in my town had previously lived in the state below us.  Gaucho (pronounced Gah-oo-show) is a term used to describe someone from Rio Grando do Sul.  Some people even went so far as to call my city, Garopaba, Gauchopaba because of how many Gauchos lived there.

Eshtevie:  This is how my friend Steven’s name was pronounced in Brazil.  He unfortunately had to leave for part of the bridge year so I didn’t get to spend as much time with him but we are both going to Tufts so there are four more years! 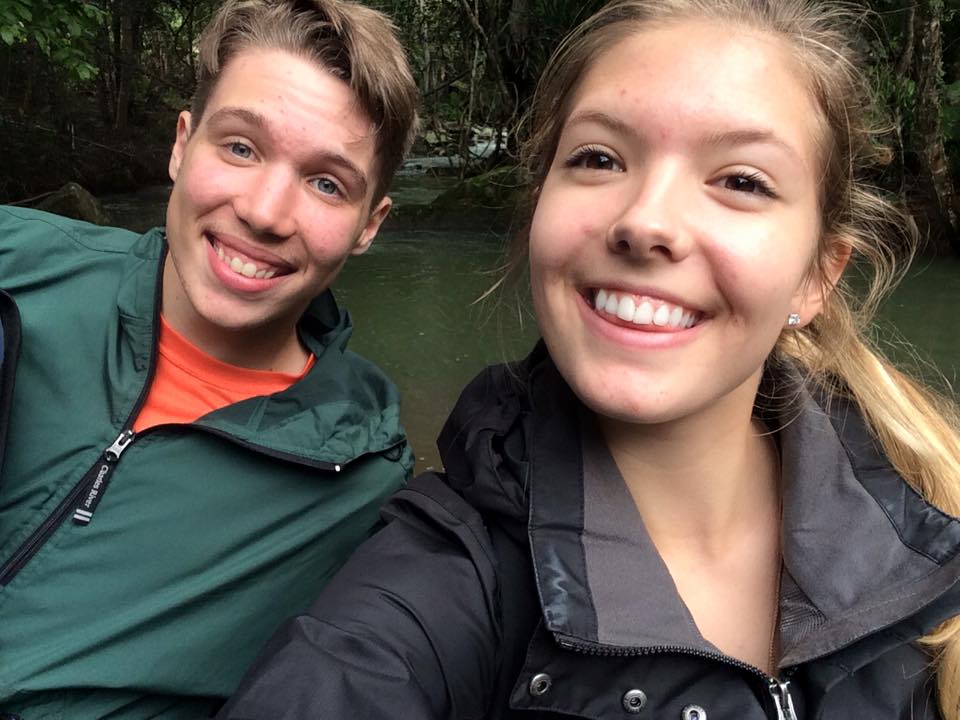 (Shout out to Steven)

Pizza Rodizio:  Pizza Rodizios are pretty much the best things in the whole world.  At Rodizio de pizza, you go to a restaurant and sit down as you would anywhere else, but you generally don’t order what you want.  Rodizio means rotation, so translated Rodizio de Pizza means: pizza rotation. Waiters walk around with platters of pizza and as they approach your table you let them know if you want a slice of the pizza they have.  They’ll serve you the pizza and continue walking around while the other waiters with the other pizza flavors keep walking around as well.  Pizza Rodizios are all-you-can eat for the same price so you might have 10 slices flash before your eyes without realizing it.  The best part out of all of this is that Brazilians make dessert pizza with chocolate and strawberries, bananas and cinnamon, pineapple and coconut- you name it.  My host family knew of my love for Rodizios and we took a family outing the weekend before I left.  Sarah was the pizza queen and always impressed people with the amount of dessert pizza she could eat.  Try not to confuse “rodizio” with “rodoviaria” because “pizza bus station” doesn’t really make sense and you’ll be made fun of for it for the rest of the year. 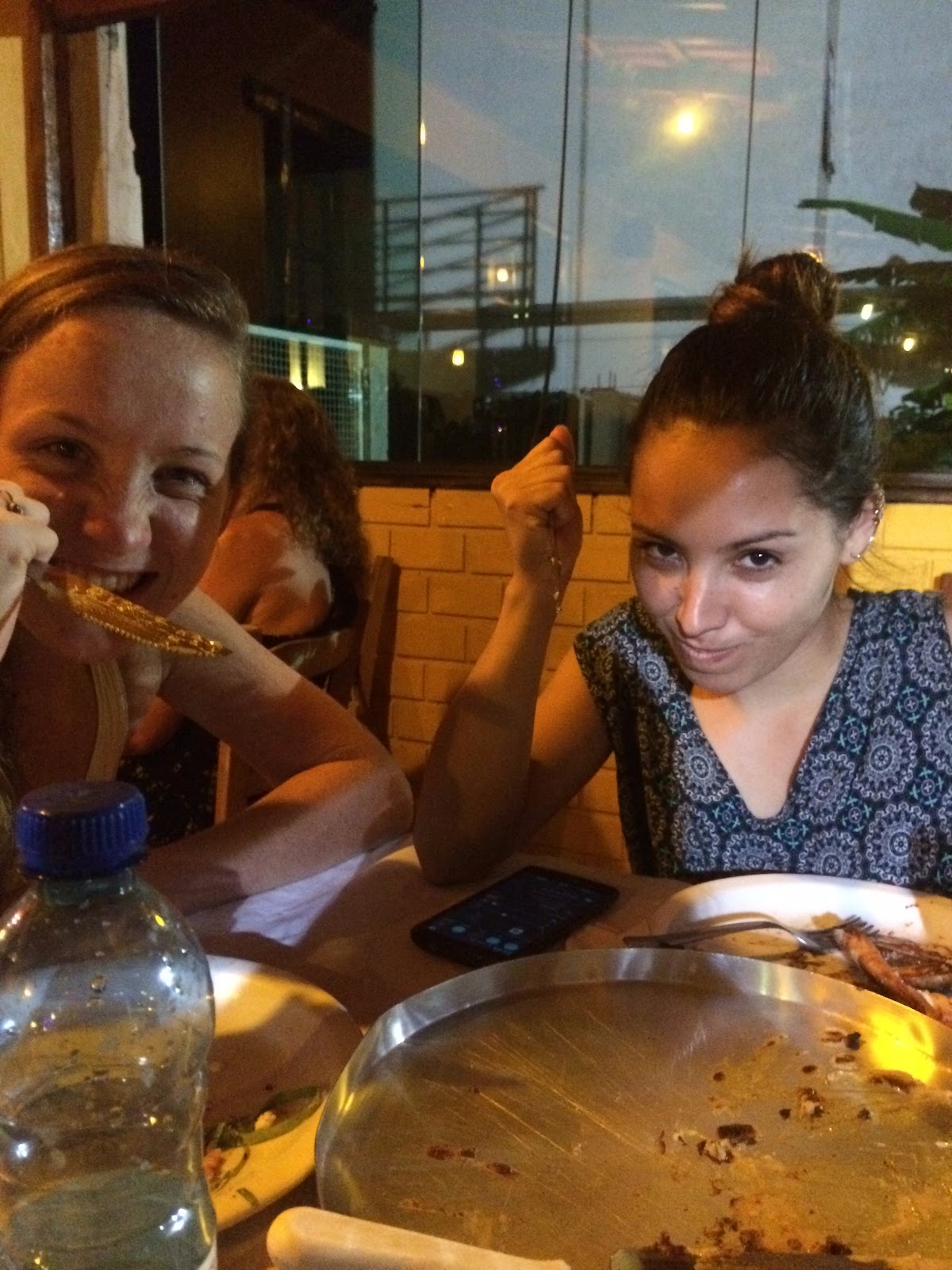 (Sarah and our Brazilian friend Keissi looking fierce at a Rodizio) 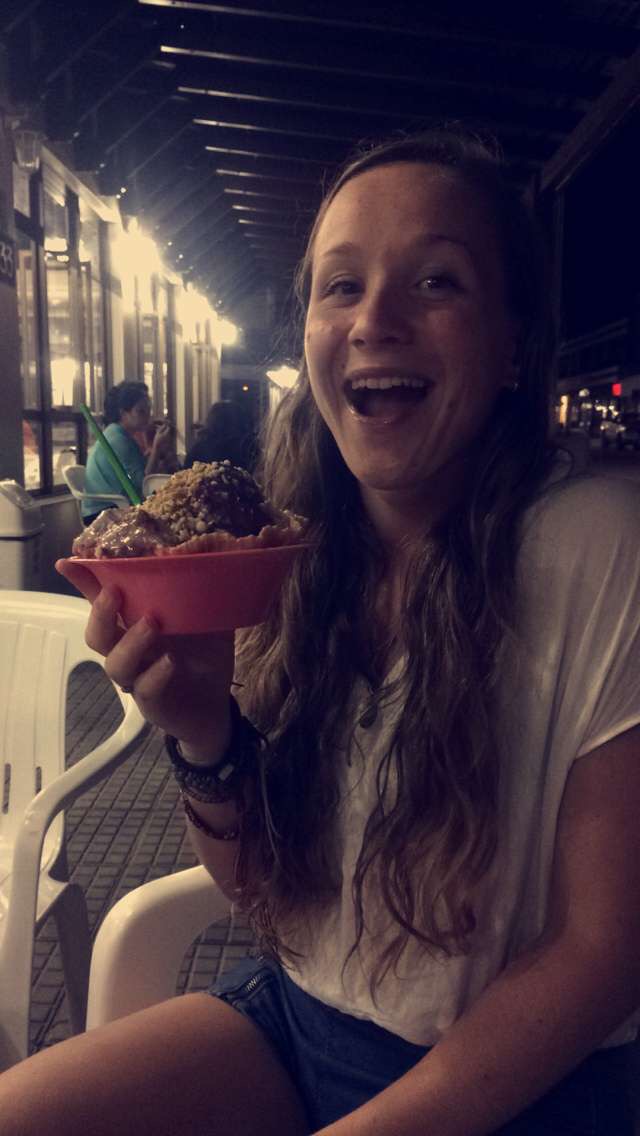 Havaianas: If Brazil had a shoe, it would be Havaianas.  These great flip flops were all I wore the whole year.  At one point a fisherman stole them.. You can read more about this in a previous blog… but they served me well nonetheless. 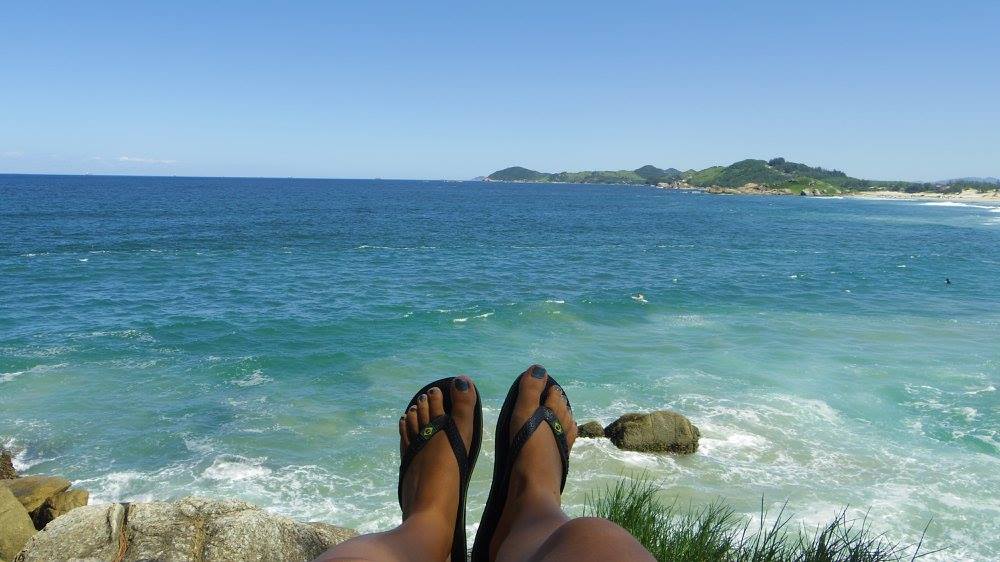 Sarita and ABC: These were some “apelidos”, or nicknames, that Sarah and I acquired over the year.  My name changed from Aberdeen to Abe, pronounced “Ay-bee” because Aberdeen can be difficult for Brazilians to pronounce, and thus it evolved to into ABC.

Chimarrão:  Chimarrão is a type of mate tea drank in the south of Brazil.  There are rules to drinking chimarrão such as: you must drink all the water- you cannot take a sip and pass it to someone else, you cannot move the straw around and disturb the mate herb, you don’t have to say thank you when someone gives you chimarrão, and chimarrão is generally shared among friends. 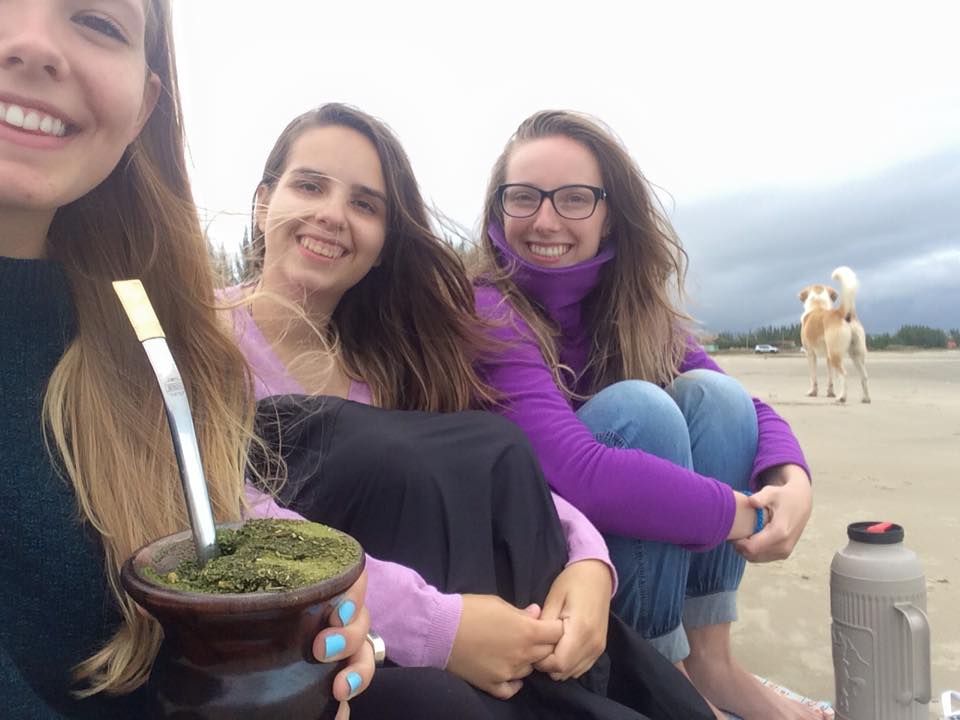 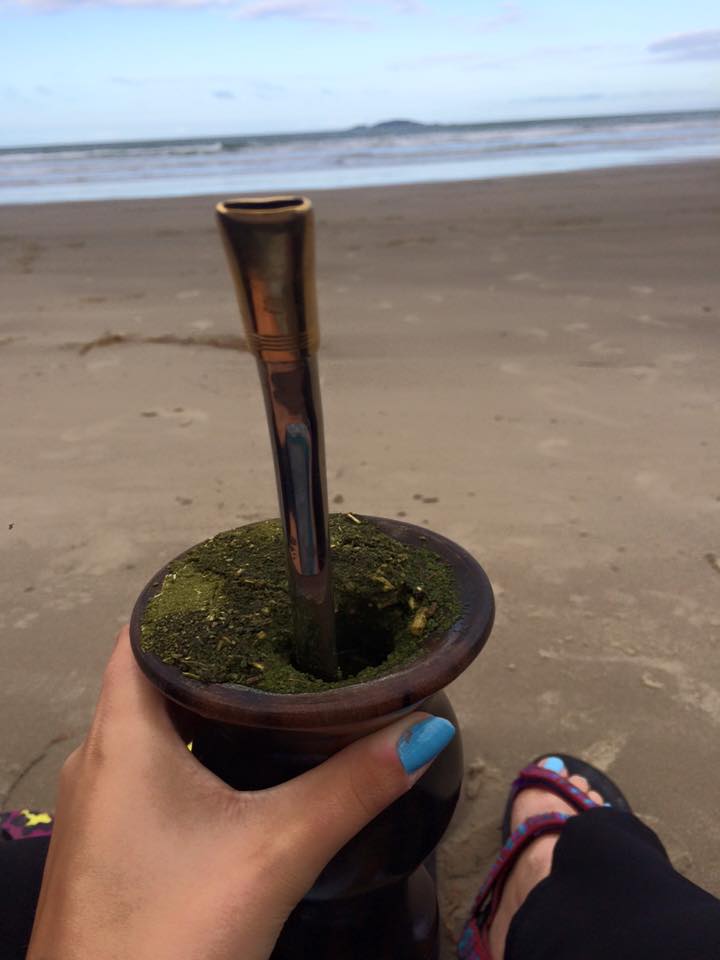 Pao vs pão:  Portuguese, unlike English, uses a lot of accents in their spelling and yes, the accents do make the words have different meanings.  For many people who speak English as their first language, the “ão” sound can be difficult to make correctly.  We often say it more like an “ow” than the way it’s supposed to be said and this is the difference between pao and pão.  Pão pretty innocently means “bread” whereas pao means penis.  You can probably guess where the awkward situations come in.  I generally just avoided saying bread at all costs and when attempted I just crossed my fingers and hoped I said it correctly.

Pancake day:  Otherwise known as Shrove Tuesday.  Sarah shared her English tradition of making a ton of pancakes, which I would have described as being more crepe-like than pancakes, right before the start of lent.  The way this was explained to me was that the original idea was to use up indulgent foods like eggs and milk in your house right before lent and you just kinda make pancakes all day.  I mean, who wouldn’t enjoy a day of pancakes?  Here’s a link to a site that explains it a bit better than I just did: http://www.telegraph.co.uk/food-and-drink/features/when-is-pancake-day-2016-and-why-do-we-celebrate-it/ 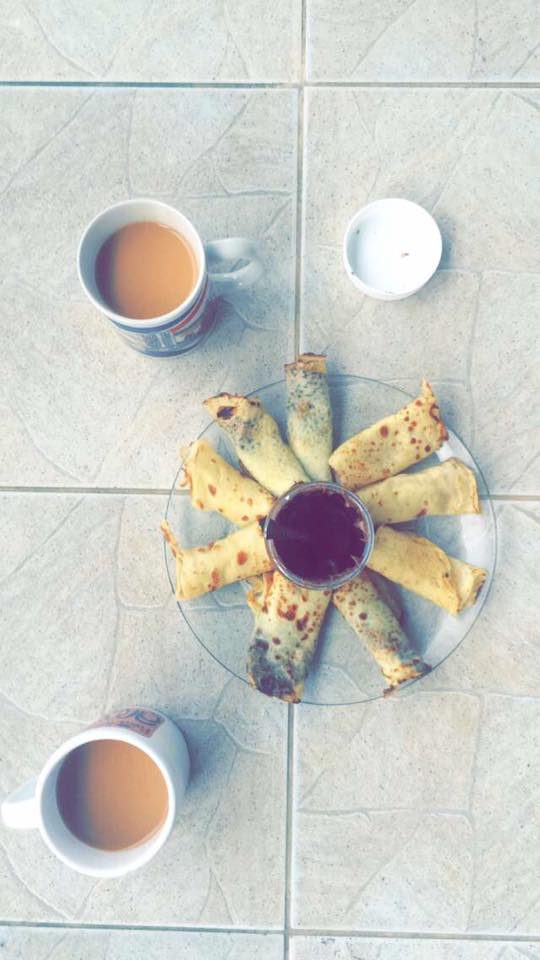 Chav: … I don’t know how to explain this one… used ironically, if you’re from England you’ll probably understand.  AKA Jordan Brett. 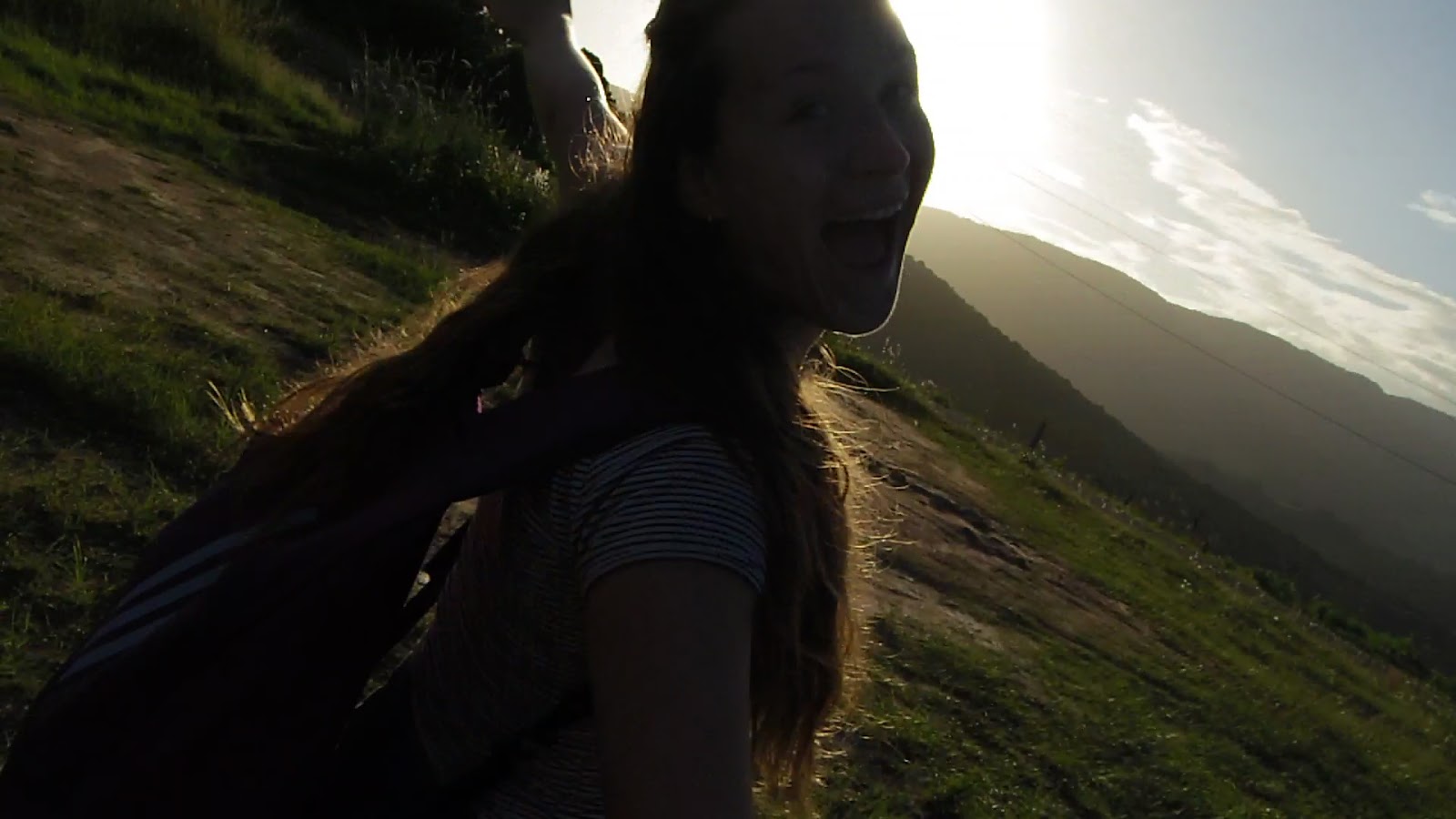 Aberdeen is passionate about writing, environmentalism, and culture. She believes that every day actions can make some of the biggest differences once accumulated, and that one should never doubt the power of a kind word. Aberdeen takes pride in sticking up for what's right in order to have, and to help others have, a voice. Her goals for the year are to experience a new culture, learn Portuguese, give back, and better ready herself to contribute to the global community in the future. Her favorite quote is: "Throw away your television, take the noose off your ambition." -Red Hot Chili Peppers.