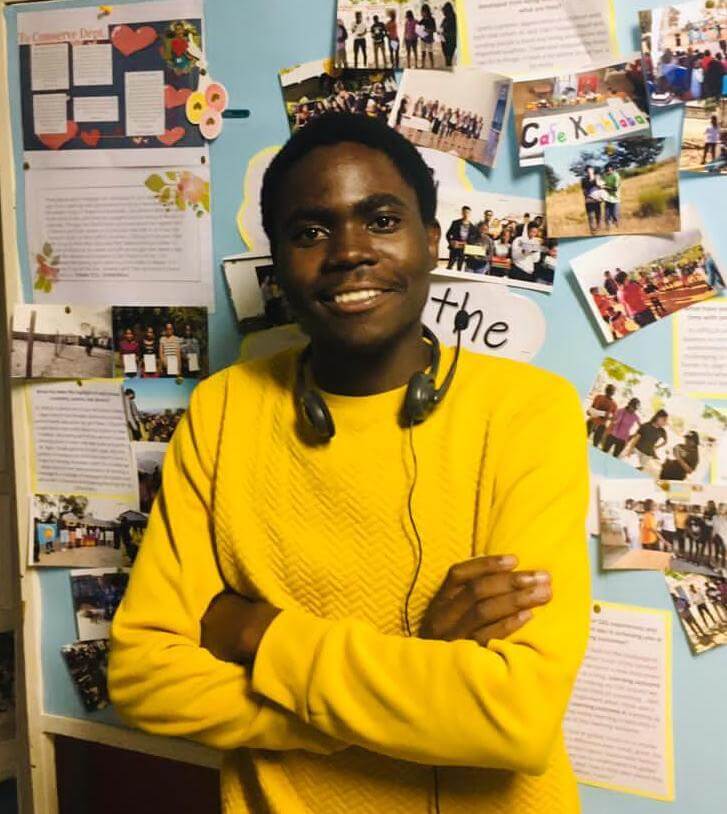 Prince Bashangezi was born into a family with four children in the Democratic Republic of Congo.

In 2015, his family was forced to flee their home village because of tribal conflicts.

He was 16 at the time, and ran away with his young sister, losing track of his parents and other siblings as they fled. After two years in a new home, Prince had to flee again, this time after burying his sister, the only family he still had. Traveling alone by boat, truck, and foot, Prince finally found refuge in the Zimbabwean Tongogara Camp and regained the precious opportunity to go back to school.

“Education,” Prince says, “is the only hope I’ve ever had to rebuild my life and help other refugees.”

Feeling a fresh sense of purpose, Prince poured all of his energy into his classes at the only secondary school in the refugee camp. He finished as the top-achieving student in Zimbabwe’s national exams in 2019 — an immense accomplishment, and one that required extraordinary resilience given the limited resources at the camp.

The Tongogara Camp struggled with a lack of qualified teaching staff and textbooks, and with overcrowded classrooms. Most students do not pass the exams to qualify for study beyond the 10th grade. For all these reasons, students are often discouraged from going to school. Witnessing those inequities led Prince to co-found a project called TWEENS (Together We Educationally Empower Non-privileged Students).

“I co-founded TWEENS as a response to the deteriorating educational situation and loss of hope among youth in Tongogara Refugee Camp. TWEENS helps these young people by offering quality tutoring lessons to fill teaching gaps. We also encourage those who have dropped out to re-start their educational journey, and help those who cannot go to school to self-study.”

In the midst of ideating and launching TWEENS, Prince learned about Global Citizen Year — and was drawn to the program for its distinct focus on supporting students to become effective leaders.

“When we look at current formal education in my country and many others around the world, it is highly focused on rigid curriculums and memorization,” Prince shares. “But the Academy provides an opportunity to develop real-world skills that every young person needs to make an impact on themselves, their communities, and the world at large.”

Through the Academy, Prince met other young leaders from around the globe who are passionate about driving change. For his social impact project, Prince wrote a proposal and pitched his idea to expand his work with TWEENS.

Additionally, with the support of Global Citizen Year he had access to apply for a grant to bring internet to the refugee camp. Prince’s project was selected as a recipient of the grant, and TWEENS is now providing internet access to the young people enrolled in its educational programming.

“At the Academy, I learned how to develop a project, drive it forward, measure its success, and effectively connect others to the cause. The Academy opened my eyes and emboldened my dreams — I can now successfully lead an impact project in my community.”

In addition to these practical leadership skills, Prince says Global Citizen Year Academy helped him learn more about himself and about his role in making the world a better place. His own learning is already having a ripple effect as TWEENS helps more and more young people in the Tongogara Refugee Camp explore and actualize their potential. Ultimately, Prince is grateful and excited to help them hope for a better tomorrow.

READY TO START YOUR LEADERSHIP JOURNEY?